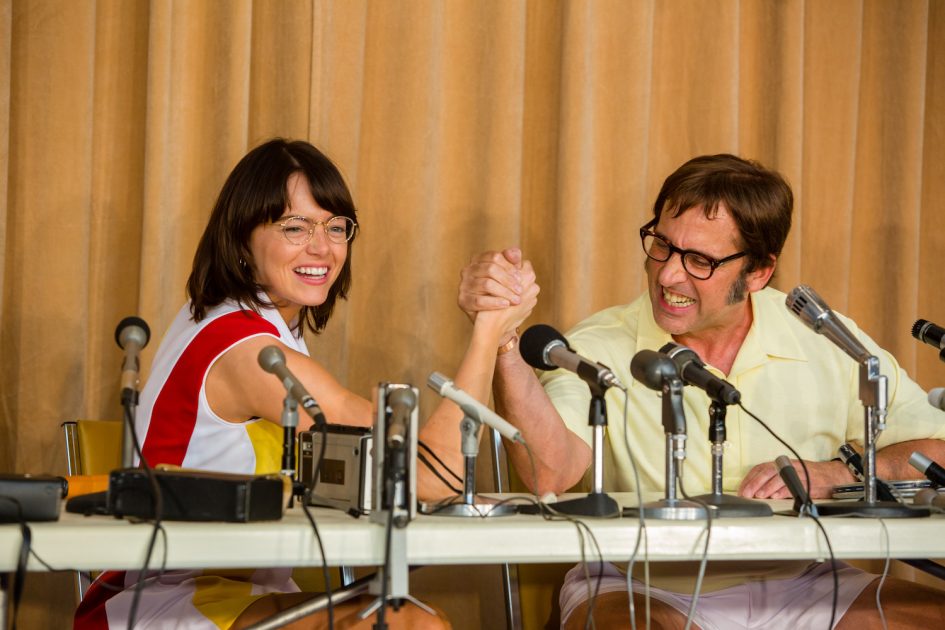 I was looking forward to the BFI London Film Festival screening of Battle of the Sexes, the movie about the 1973 tennis showdown between feminist heroine Billie Jean King and chauvinist jackass Bobby Riggs.

I love tennis, I love the 70s, and this film, directed by Valerie Faris and Jonathan Dayton, stars the fabulous Emma Stone and Steve Carell. So why did I feel so cheated by this uneven, dishonest and virtue-signalling take on an important moment in the history of women’s tennis and women’s rights?

The problem is Marilyn Barnett. If you’re not a student of tennis history, you may not be familiar with Barnett’s name. Unlike multiple Wimbledon champion Billie Jean or even Bobby Riggs (a Wimbledon winner in 1939) – Marilyn’s involvement in tennis was mainly tonsorial. She was King’s hairdresser, PA and (clandestine) lover during the 70s. Their relationship ended in acrimony, with Barnett eventually suing King for financial support in the notorious ‘galimony’ suit of 1981.

This film completely ignores the damaging impact of the King/Barnett affair and the appalling way in which Billie Jean was eventually outed, shamed and forced to admit to what she called ‘a mistake’.

I know that films about real people (especially living celebrities) often play fast and loose with the truth. My issue with Battle of the Sexes is that it wants to engage with important issues like gay rights and women’s equality, but in a very superficial way. If you’re going to spend so much screen time showing how the King/Barnett affair started and the problems it caused in that closeted era, why not tell the whole story?

Andrea Riseborough (Birdman), who plays Barnett, is a brilliant actress known for her ability to disappear into a role, but even she can’t make Marilyn seem less vacuous and, frankly, annoying. I wanted to see and hear more about how King and World Tennis magazine founder Gladys Heldman (Sarah Silverman) started the Virginia Slims tour in 1970 and established women’s tennis as a sport in its own right. I guess we’ll have to wait for another movie to see that.

If you enjoy watching a middle-aged goat getting his comeuppance at the hands of the women he consistently disrespects, then Battle of the Sexes may be just the ticket. As Bobby Riggs, an inveterate gambler and anti-women’s libber, Steve Carell makes this master of the sexist soundbite (‘I love women – in the bedroom and in the kitchen!’) highly watchable.

Riggs channels his own mid-life crisis, gambling addiction and crumbling marriage to the long-suffering Priscilla (Elisabeth Shue) into undermining women’s tennis. He outfoxes then World No. 1 Margaret Court in the ‘Mother’s Day Massacre’ of May 1973, before goading King into playing him in a best of five sets match at the Houston Astrodome on 20 September. 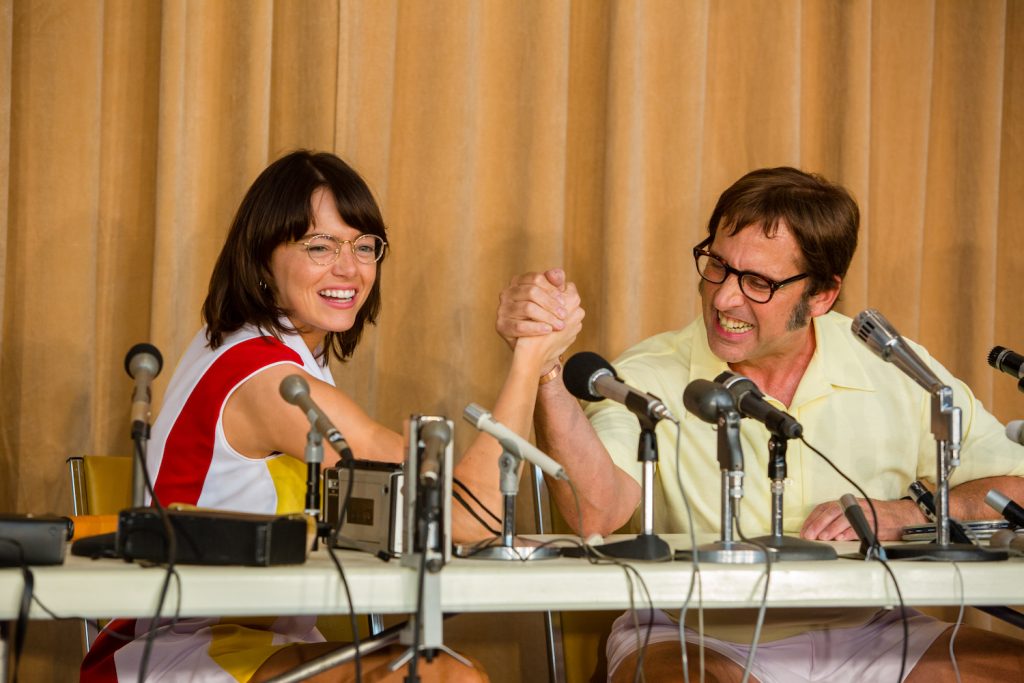 There’s something defiantly Trumpian about Bobby’s attempted rallying call at a Gambler’s Anonymous meeting: ‘You folks aren’t here because you’re gamblers. You are here because you are terrible gamblers!’ He is a myopic and often ridiculous man of his time, much like promoter and ex-player Jack Kramer (Bill Pullman), who doesn’t see the problem in offering women players one-eighth of the prize money given to the men at his Pacific Southwest tournament.

Much as I enjoyed Emma Stone’s performance in La La Land, I think she is miscast here as Billie Jean King. The shaggy 70s hairstyle, the glasses and even the deft volleying skills are all a good approximation of the real BJK, but the woman on screen here lacks inner steel.

Stone convincingly portrays the vulnerable side of King, brooding in anonymous motel rooms or weeping in the locker room. But she’s more ingénue than seasoned pro when it comes to fronting up as the figurehead for women’s tennis at meetings and press conferences.

The other pantomime villain in this film is Australian behemoth and multiple Grand Slam winner Margaret Court (improbably played by the attractive Jessica McNamee), whose anti-gaydar starts twitching every time she claps eyes on Billie Jean King and Marilyn Barnett. The very unchristian Rev Court has aged into a deeply unpleasant bigot, but was she really as nasty as that in the 70s?

As a mainstream Hollywood movie, Battle of the Sexes is more of a crowdpleaser than a rallying cry for women of the 21st century. But for all its faults the film delivers a rousing finale, with all the razzamatazz of the match at the Houston Astrodome, which attracted a TV audience of about 90 million.

As the misdeeds of Donald Trump, Harvey Weinstein and others dominate the headlines, this film is a salutary reminder that women have won many battles but are still losing the war.