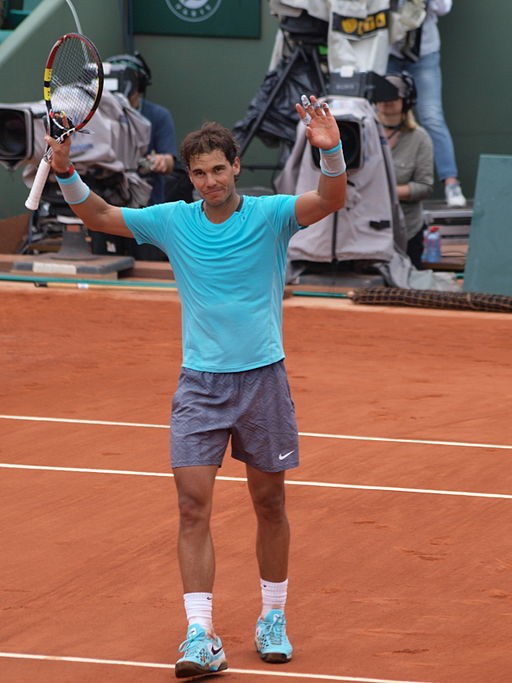 ‘Thank you very much’: Rafael Nadal conquers Paris in 2014 (pic by François GOGLINS (Own work)

Journalist and tennis fan William Skidelsky has written a book called Federer and Me: A Story of Obsession

, which will be published next week. I don’t think I’ll bother reading it because I’m a Rafael Nadal fan, and life is just too short to waste time reading about some middle-aged guy’s obsession with the sporting superhero I like to call the Federator.

While you Fed fans are reading about Skidelsky’s desire to ‘luxuriate in the silky wondrousness of [Roger’s] play’, I’ll be mulling over the dimming prospects of ever getting my Rafael Nadal book off the ground. Can the tennis book market really stand a second volume of memoirs about a long-distance love affair with one of the game’s superstars? I fear that Skidelsky has stolen my thunder, just as Novak Djokovic, Andy Murray and just about every other player of note has stolen the Spaniard’s thunder during his inglorious clay court campaign of 2015.

Skidelsky writes that ‘it wasn’t love at first sight’ when he first clapped eyes on the wondrous Roger Federer back in 2003. I can’t say I’m surprised because back then Rog was still sporting that ponytail and stubble, which made him look like a total dork (albeit one with great racket skills).

By contrast, I was totally smitten when I first saw Rafa on TV in 2006 playing at Roland Garros. It was the year he scooped his second French Open title (defeating Federer in the final) and he went on to lose in the Wimbledon final to (you guessed it) the imperious Monsieur Federer.

What was it about the young Spaniard that captured my imagination and has continued to do so during a decade of triumphs, disasters, debilitating injuries and fruitless attempts to get control of his sweaty underwear? I’ve got to be honest, it was the combination of his perma-tanned pirate look and his take-no-prisoners style of tennis.

With his biceps busting out of those day-glo sleeveless tops and flowing headbands worn with the same panache as the great Suzanne Lenglen, Rafa cut quite a dash as he topspin forehanded his way across the clay courts of Europe. Monte Carlo, Barcelona, Rome and Paris were all conquered as he rose to Number 2 in the rankings and then, in 2008, defeated King Roger in the gathering gloom on Centre Court at Wimbledon. Some called it the Greatest Tennis Match Ever Played. Others were dismayed that this tennis barbarian had brought down the Federator.

Other things I love about Rafa include his lack of facility with the English language. His interviews have never been as polished and articulate as those of Federer or Djokovic. He stumbles over his sentences and resorts almost as frequently to his stock phrase – ‘Thank you very much’ – as he does to running round his backhand or fiddling with his shorts.

Rafa’s never going to win any prizes for making victory speeches in fluent French either. It may bother the snooty crowds at Roland Garros, but I couldn’t care less. You don’t need words, witticisms or faux wisdom when you have the most expressive eyebrows in the history of tennis (during interviews they’re permanently at a downward angle of 45 degrees).

Talking of angles, commentators have spent an inordinate amount of time analysing how Nadal positions his drink bottles at the side of the court. They’ve dissected the growing number of tics that make up his lengthy pre-service routine and speculated on whether his game would implode if someone kicked over the bottles or gave him a time-violation warning.

Yes, Rafa Nadal is more than a little obsessive-compulsive. If he’d spent less time towelling off over the past decade I might actually have written that long-delayed novel or found time to learn another language. He’s not perfect and neither are his knees, back or wrist – any or all of which may bring his career to a premature end.

Sadly, it’s not just Rafa’s eyebrows that have been heading the wrong way lately. His ranking has plummeted (he’s currently 7 in the world) and his recent string of defeats has attracted even more analysis than Labour’s recent meltdown in the 2015 General Election. If he loses his French Open crown this fortnight will it be the beginning of the end for this Spanish superstar?

Timing is everything – both for sports stars and their fans. In hindsight I wish I’d gone out at the top and ‘retired’ from tennis fandom when Rafa won his ninth French Open crown in 2014. But I lingered too long and now the rot has set in for both of us. I’d love to be proved wrong but I can’t see him emerging victorious from a potential quarter-final dust-up with Novak Djokovic. That’s assuming he even gets to the second week.

I’ll spare myself more afternoons of sweaty-palmed misery watching him lose on the courts where he has reigned supreme for so long.

Adios Rafa and thanks for rocking my world.