Thomas Vinterberg serves up Another Round: BFI London Film Festival 2020 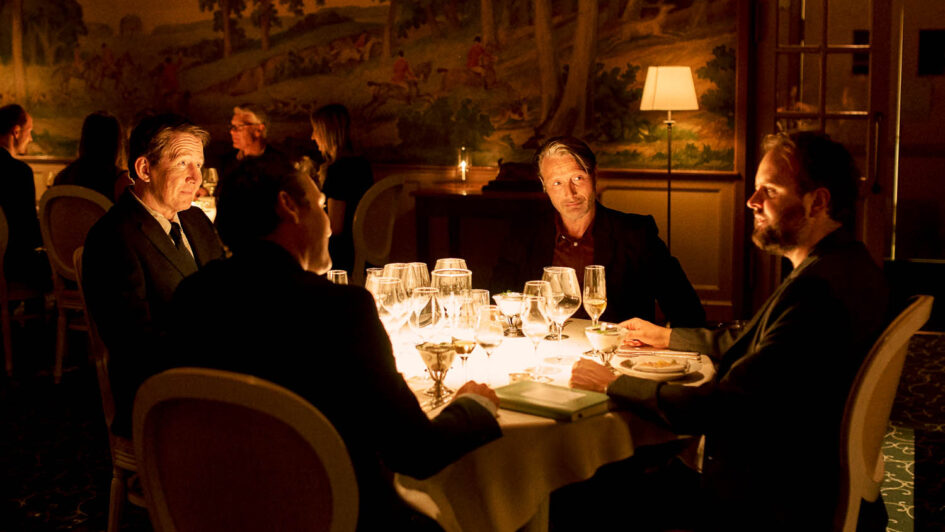 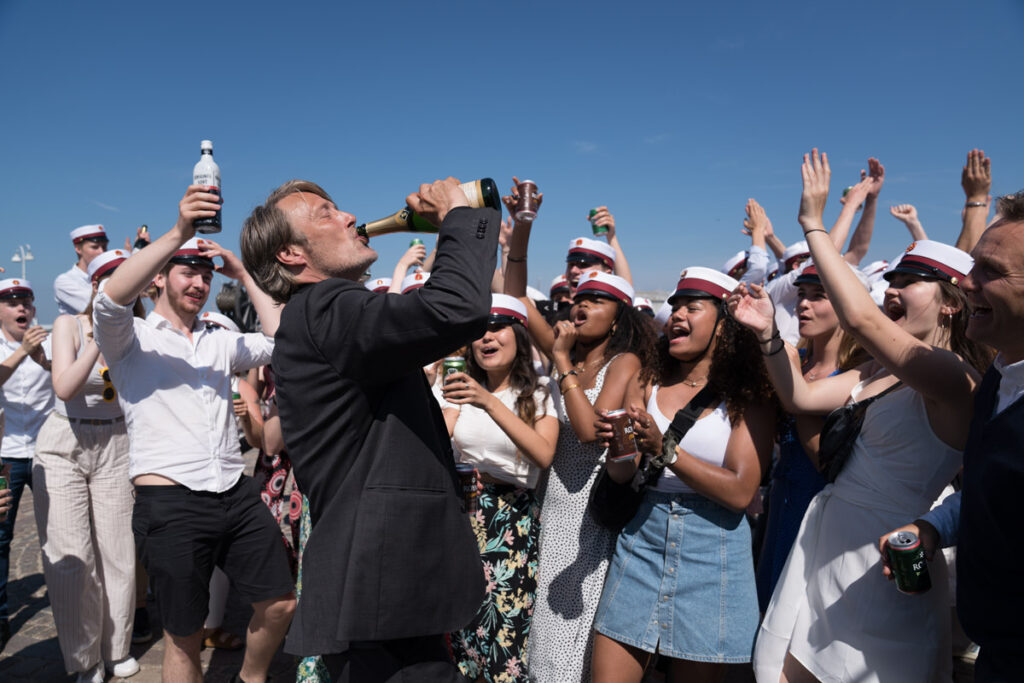 Fizzing with energy: a rejuvenated Mads Mikkelsen in Another Round (pic Henrik Ohsten/StudioCanal)

It is tempting to mix in a few drink-sodden clichés when talking about Thomas Vinterberg’s Another Round (Druk), which I was lucky enough to see at the BFI London Film Festival 2020. This comedy-drama about four middle-aged Danish men experimenting with a state of permanent inebriation, stars Mads Mikkelsen, who played the sadistic Bond villain Le Chiffre in Casino Royale. It left me shaken, stirred and, above all, entertained — no small feat in these joyless and careworn times.

History teacher Martin (Mads Mikkelsen) is stuck in a rut at home and at work. His wife Anika (Maria Bonnevie) is drifting away from him and his lacklustre classroom performance is worrying his pupils and their parents.

Martin joins colleagues and friends Nikolaj (Magnus Millang), Tommy (Thomas Bo Larsen) and Peter (Lars Ranthe) for a lads’ night out, where they hit upon a solution to their flagging self-confidence. Before you can say Jack Daniels, they’ve all signed up for a self-monitored regime of daily drinking that will keep their blood alcohol level permanently elevated at 0.05% — as recommended by Norwegian psychiatrist Finn Skårderud. There will be no drinking after 8pm or at weekends, and Nikolaj will record the effects on their ‘performance’ at home and at work. What could possibly go wrong?

What follows is an exhilarating trip through the pleasures, perils and double standards of drinking to excess, while trying to convince yourself that you’re doing good for yourself and others. The re-energised Martin regales his class with some background on the drinking profiles of Second World War leaders Churchill, F. D. Roosevelt and Hitler (the Führer was teetotal). He surprises his wife and sons with a canoeing trip, where he’s too pissed to put up a tent but performs his matrimonial duties more effectively.

The clandestine drinking is undignified and funny, with awkward moments like sports teacher Tommy refusing to share his bottle of fortified ‘water’ with pint-sized pupil ‘Specs’ during a football match. Nikolaj, who moans that his three kids often pee on him in bed, soon has his own problems with drink-related incontinence – to the disgust of his long-suffering wife, Amalie.

With repeated references to author (and alcoholic) Ernest Hemingway as a role model for this boozy lifestyle, Vinterberg and his co-writer Tobias Lindholm give a strong hint that this story won’t end happily for all the protagonists. To their credit, they don’t turn this into another maudlin cautionary tale about the perils of drink. That’s partly because of the joyous outdoor partying scenes that bookend the film and provide a visual counterpoint to the rather gloomy interiors of Martin’s home.

Another Round begins with sozzled students doing circuit laps around a lake and ends with a rejuvenated Mads Mikkelsen dancing under a spray of champagne, surrounded by cheering youths. It’s a reminder that Denmark has shockingly high rates of alcohol abuse among teenagers and that finding a healthy balance between booze, socialising and academic success is a complicated business.

Vinterberg’s film isn’t going to enter the canon of bleak studies of alcoholism, like The Lost Weekend, Days of Wine and Roses or Leaving Las Vegas. Held together by Mikkelsen’s stellar performance, Another Round is a thought-provoking ensemble piece, that will leave you tapping your toes and launching into a chorus of ‘What a Life’ by Scarlet Pleasure, as you sip a glass of something cool and intoxicating.