John Terry and the C-Word 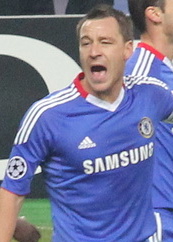 “John Terry’s career has been defined by courage, commitment and . . . controversy.” That was the verdict of an earnest BBC reporter with airtime to fill but not much in the way of new information about the latest drama to engulf the Chelsea captain. On the eve of his FA disciplinary hearing on a charge of racism, Terry announced last night that he was quitting the England team with “a broken heart”.

It was all a world away from the cosy Sunday evening fare usually provided by the likes of Downton Abbey. But in terms of narrative incoherence, unintentional humour and a total lack of character development, perhaps the John Terry Story could have come from the pen of Julian Fellowes.

Of course the BBC tactfully omitted to mention that it was John Terry’s use of a four-letter C-word that may end up defining his topsy-turvy career as football’s Man You Love to Hate. But an unwritten law only allows that word to be used by BBC presenters when discussing the former Culture Secretary Jeremy Hunt.

I don’t want to downplay the importance of eradicating racist language and behaviour from football, sport and society as a whole. But Terry’s dispute with QPR’s Anton Ferdinand has always struck me as a playground spat between a couple of numbskulls rather than racism per se. That’s just my opinion, though, so do feel free to go on Twitter and abuse me if you disagree. (Just kidding.)

Sadly, John Terry’s attempt to present himself as the victim of an FA witch hunt has gone down about as well as Lib Dem leader Nick Clegg’s recent apology for raising tuition fees. Terry thought his acquittal on criminal charges back in July should have been the end of the matter, but those sages at the FA have to see the bigger picture.

So now we have another C-word to throw at the Chelsea captain — capitulation. Some believe that he’s chosen to call time on his England career rather than lose his place if this disciplinary hearing goes against him. Come to think of it, we could probably review a decade’s worth of headlines on John Terry — “Captain, Leader, Legend” — without getting much further than the third letter of the alphabet.

In 2010 it was Terry’s ex-colleague Wayne Bridge making the headlines for refusing a handshake. It turned out that the amorous JT had done a lot more than just shake hands with Vanessa Perroncel, Wayne’s former squeeze and mother of his son, Jaydon. Bridge quit England in a huff and those supersubs at the Daily Mail came up with this really clunky headline.

Capello falls on his sword

Always a model of consistency, Fabio “the Communicator” Capello was the England coach who stripped Terry of the England captaincy in 2010 over the “Bridgegate” affair, and then reinstated him in 2011 to the astonishment of Rio Ferdinand and just about everyone else. Earlier this year the FA decided to remove Terry from the job again, prompting Capello to quit in a huff. Are you seeing a pattern here?

April fool JT was banned from playing in the 2012 Champions League Final against Bayern Munich after his “knees-up” with Barcelona’s Alexis Sanchez in the semi-final second leg. Never one to miss a party, JT changed into his full Chelsea kit to collect the Champions League Trophy, prompting some wags on Twitter to mock-up other scenes of (unearned) Terry triumphs.

Court in the act

The racism trial wasn’t the first time John Terry found himself in court. In 2002 a fresh-faced Terry was one of three players prosecuted after a brawl in a Knightsbridge club. He was acquitted of assault and affray. A year earlier he’d been fined by Chelsea for mocking American tourists at Heathrow after 9/11. Over the years there have been many other piss-taking incidents, including one involving a glass full of urine.

Finally, who can forget the sight of John Terry crying after missing his penalty in the 2008 Champions League Final. The Sun’s “Tears of a penalty clown” caption summed up the sight of rain-soaked and blubbing JT. I almost felt sorry for him.