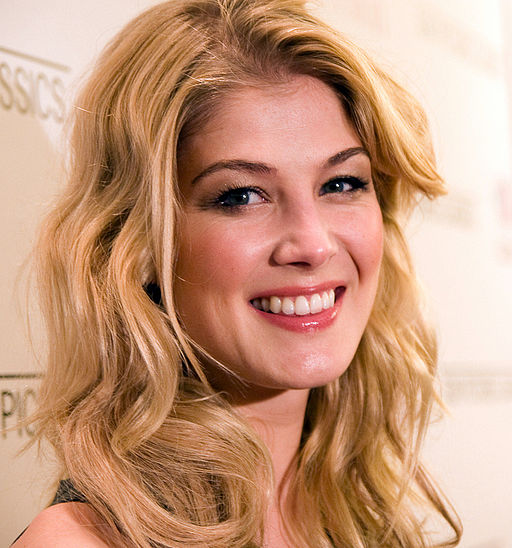 Gone Girl will be best enjoyed with your blood-alcohol level raised and your expectations lowered.

Before the 2014 BFI London Film Festival gets under way next week, I decided to indulge in some mainstream, big-budget Hollywood entertainment – David Fincher’s Gone Girl. This eagerly anticipated adaptation of Gillian Flynn’s runaway bestseller stars Ben Affleck and Rosamund Pike as the picture-perfect Nick and Amy Dunne. When beautiful blonde Amy disappears from the couple’s home in North Carthage, Missouri on their fifth wedding anniversary, the police uncover suspicious blood spatter quicker than you can say Dexter Morgan. From then on Gone Girl is a roller-coaster ride of plot twists, culminating in that old BFI favourite: “strong, bloody violence”.

I haven’t read Gillian Flynn’s novel, but those familiar with the source material will know that it’s difficult to reveal too much about the plot of Gone Girl without plunging headlong into spoiler territory. It starts out a bit like a police procedural (Nick even cracks a joke about Law & Order), as the (not sufficiently) distraught husband comes under intense scrutiny from the cops, the locals and excoriating TV host Ellen Abbott (Missi Pyle). Meanwhile, flashbacks of Amy writing in her diary fill us in on their past life as yuppie journalists in New York, and what may have proved to be a fatal attraction.

Gone Girl is a story in which two highly unreliable narrators pursue high-risk agendas that pull audience loyalties one way and then the other. Though the opening half hour is a bit slow, skeletons soon start tumbling out of closets and something nasty (or at least very unwelcome) turns up in the woodshed, as the protagonists revel in media manipulation, role-playing and illicit sex.

With her patrician beauty, English rose Rosamund Pike might seem like more obvious casting for genteel period drama like Downton Abbey than the rigours of a David Fincher movie. (Remember what happened to Gwyneth Paltrow in Se7en?). But despite the occasional wobble in her accent, she is a revelation here as the missing trust-funder with a penchant for picking the wrong guys. Chomping hamburgers on the fly and splashing about in buckets of blood, Pike throws herself into the extremes of “Amazing” Amy’s jaw-dropping antics with gusto.

Some people don’t like Ben Affleck (maybe it’s the Oscar wins, his politics or the fact that he’s really an Affleck-Boldt). For me he’s the natural successor to Jeff Bridges in Jagged Edge, as the handsome, lazy and morally reprehensible bar-owner Nick Dunne. Neil Patrick Harris and Tyler Perry are also highly effective as, respectively, Amy’s creepily devoted ex-suitor and Nick’s hot-shot attorney.

The problem is that while director David Fincher seems tailor-made for this kind of high-concept thriller, I didn’t find Gone Girl nearly as much fun as some of the critics who’ve gone overboard with their praise this week.

Of course it’s not essential that any of the main characters are likeable or sympathetic – they’re certainly not in this film. I didn’t bring art-house level expectations of a profound meditation on modern relationships or media excesses to what is, after all, just a pot-boiler. But given my unfamiliarity with the material I did expect to be much more shaken, stirred, excited and even horrified by this ugly tale of a thoroughly toxic relationship.

Perhaps the problem is that at 145 minutes long Gone Girl continues the 21st-century trend for films that outstay their welcome by a good 20 minutes. I also found that the content and the presentation of Amy’s diary entries made for a boring, bland introduction to the character, though perhaps that was deliberate.

Gone Girl will be best enjoyed with your blood-alcohol level raised and your expectations lowered. Despite the hype, this is not a modern masterpiece.