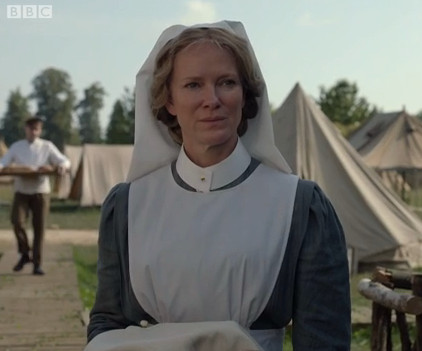 In a makeshift tent somewhere in France, three rookie nurses are set the exacting task of making up a hospital bed in just two minutes under the steely gaze of Matron. They’re cheered on by a motley band of supporters. Is this “The Great British Bed Off”, a new spin on the BBC’s hugely popular The Great British Bake Off? No, it was episode one of The Crimson Field, BBC1’s much-hyped First World War drama about VAD nurses.

In 1915 three young ladies arrive at “Hospital 25”, somewhere in northern France, to begin their baptism of fire at the hands of formidable Matron Grace Carter (Hermione Norris) and her sidekick Sister Margaret Quayle (Kerry Fox). A clumsy expositional scene reveals that Grace has recently (and unexpectedly) won promotion over Margaret, who brushes off the snub with a none-too-convincing “I couldn’t be more proud” speech. Fox, who’s been turned into a “Silver Fox” for this role, later enjoys a couple of moments of villainy, when she steals a cake and helps send a traumatised soldier back to the Front.

The Hour’s Oona Chaplin plays Kitty Trevelyan, the most insubordinate – and therefore most appealing – of the new arrivals. We know she has a romantic past because she’s first glimpsed tossing a ring off the prow of the Boulogne-bound ship, in a scene that might have come straight out of Titanic. With her smoking, blaspheming and answering back to Matron, Kitty was courting trouble even before she almost got herself killed by a distressed and dying patient.

Marianne Oldham’s priggish Rosalie Berwick – “The rules are there for a reason” – tries to lay down the law to the defiant Kitty and gets a tongue-lashing for her trouble. Dim-witted Flora Marshall (Alice St. Clair) provides most of the lighter moments in this episode, mainly thanks to her faltering attempts to deal with a large heap of bloodied bandages containing some putrefying body parts.

A soldier instructs floundering Flora to toss the severed digits (they look a bit like raw chipolatas) into something that resembles an outdoor pizza oven. “They’re rotten – neither use nor ornament,” he explains, thereby summing up the likely contribution of VAD nurses to the war effort.

The brilliant Blackadder Goes Forth showed how black humour can be an effective way to convey the horrors of mechanised slaughter. But I imagine the producers of The Crimson Field were also aiming to provoke sorrow at this endless parade of broken bodies and souls, and anger at the apparent callousness of some senior officers. As the head of the hospital, Lt-Col Roland Brett, Downton Abbey’s Kevin Doyle has a couple of good scenes in which he tries (and fails) to engineer a humane exit for a psychologically broken soldier.

Until the belated arrival of Suranne Jones as the motorcycle-riding civilian nurse Joan Livesey, the main reason to keep watching The Crimson Field was Hermione Norris. Admittedly, Matron Carter was saddled with a very predictable storyline here, as she alternated between tender concern for her moribund patients and barely disguised contempt for her new charges.

You can stick her in a WWI nurse’s outfit in a field in France (it’s actually Wiltshire), but Hermione Norris will always be Ros Myers, the ass-kicking, terrorist-chasing, leather-jacketed heroine of spy drama Spooks. Watching her castigate the hapless Flora for wearing scent (“just rosewater”) I found myself wondering how the take-no-prisoners Ros would have dealt with these simpering females.

My best guess is that Ros would have dunked Flora’s empty head in that bowl of water, washed out the impudent Kitty’s mouth with the bar of soap and then told Rosalie to stop being such a sycophant.