Fed Up with Wimbledon 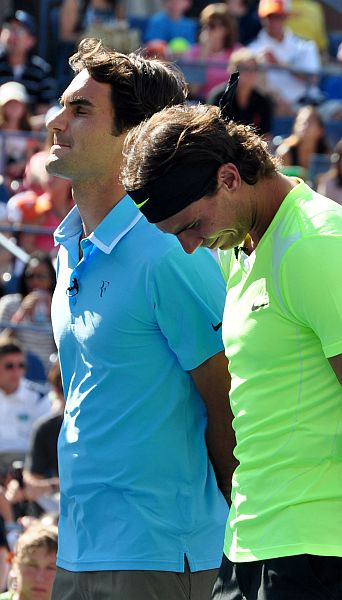 Spare us the running commentary

Good news for EastEnders fans: Andy Murray’s 4th-round match against Richard Gasquet at Wimbledon is scheduled first on Centre Court today. So unless the 4th seed and his French opponent get involved in a contest of truly Isner-esque proportions they won’t be playing havoc with BBC schedules this evening. The nail-biting drama and intemperate language on BBC1 tonight will be coming from Albert Square not SW19.

Usually I’d be excited about the second Monday of Wimbledon and the prospect of wall-to-wall match-ups between the greatest tennis players in the world. But after more than 30 years of dedicated ball-watching I think I’ve finally had enough. Even the sight of Rafael Nadal’s digitally enhanced torso wrapped round last Friday’s edition of Metro didn’t reignite the flame.

It’s not the game itself that’s become a big turn-off for me. I’m not so decrepit that I can’t still leap out of my chair when Rafa bends one of his trademark forehands round the net or Federer disdainfully swats back an indifferent second serve. The problem is the BBC coverage, which has been in steady decline ever since someone decided that the world’s greatest tournament could be boiled down to the perennial question: “Can Andy Murray Win Wimbledon?” To be fair this tendency began with “Timbledon” in the 90s and Murray’s arrival has merely changed the accent slightly.

I have complained about this before — only to be rudely slapped down by posters who confuse my criticism of the British sports media with a lack of support for Murray himself. If I lived anywhere but the UK, I’d be free to enjoy the quality of Andy’s tennis without all the attendant hype. I may be wrong, but I suspect viewers in the US and Australia don’t have to watch reporter Garry Richardson’s teeth-grindingly awful post-practice encounters with the Scot. Murray, unshaven and dripping with sweat patiently endures a grilling over his pre-match preparations. But do we really care which film he watched on TV last night? Actually, Garry’s questions are so rambling that if he was in court (as opposed to on court), the opposing lawyer would be shouting “Relevance, Your Honour!”

The BBC’s role as self-appointed Andy Murray cheering squad is just one annoying aspect of today’s inferior tennis coverage. As an armchair spectator you’re totally at the mercy of Sue Barker, John Inverdale and the BBC’s army of commentators, experts and former players. Unless you choose to watch with the sound off (I frequently use the mute button these days), you can’t avoid being crushed under the weight of (irrelevant) statistics, oft-repeated anecdotes and sniggering comments about Nadal’s shirt-changing routine.

You might think that the increased court coverage and wide range of commentating talent would be good news for viewers, but I’m not so sure. If you have a “red button” you can now opt to watch the players you like — as opposed to joining the collective dismay over the early demise of Elena Baltacha, Anne Keothavong, et al. But thanks to the BBC’s (not-so) wonderful interactive service, I still missed the end of Andy Roddick’s third-round defeat by Feliciano Lopez, because the feed had cut away to Francesca Schiavone on Court 5!

The bigger question is how so many different people can all end up sounding exactly the same. I don’t mean, of course, that John McEnroe, Boris Becker and Pat Cash have the same accent. It’s more that they all seem to be spouting from what you might call The Big Book of Universal Truths About Tennis. These include:

As a Nadal fan, I’m particularly amused by the fact that (as usual) he’s being written off in the rush to talk up Murray and Federer. The guy’s won four of the last five Grand Slams, yet there still seems to be only a grudging acceptance of his genius. I don’t care how imperious Federer looks in the early rounds — it’s what happens this week that counts. Should he and Rafa make it through to their fourth final here, my money is on the Spaniard.

Martina Navratilova’s opinions are usually worth hearing, but in today’s Times, she echoes The Guardian‘s Kevin Mitchell in declaring Fed the most likely winner. What really caught my eye, though, was her assertion that the top women players aren’t getting their fair share of time on the show courts. “Research shows that people turn up wanting to watch the men but when they leave the tournament is was the women they really enjoyed watching.”

In the words of John McEnroe, “You cannot be serious!” What kind of research was that, Martina? Not to be crude, but did you ask them whether it was the tennis or the acres of tanned flesh on display that they found most attractive? Admittedly I did enjoy watching the contest between Venus Williams and the Japanese veteran Kimiko Date-Krumm. This all-court encounter was a bit like stepping back in time — more emphasis on guile and less on grunting. What a shame the commentators ruined it by reminding me every five minutes that Date-Krumm is (wait for it) 40 years of age!

I might tune in later today to see whether Rafa can beat Juan-Martin del Potro. I’m sure the Spaniard won’t be guilty of underestimating del Potro. But even if he reaches Sunday’s final to play Federer again I’m already yawning at the prospect of being reminded about the last time they met in 2008. That final is now universally acknowledged to be Wimbledon’s Greatest Ever Match. If like me you disagree and still harbour fond memories of Borg vs Gerulaitis (1976) or Borg vs McEnroe (1980), just remember to turn down the volume on your set on Sunday — and keep it there for the duration.