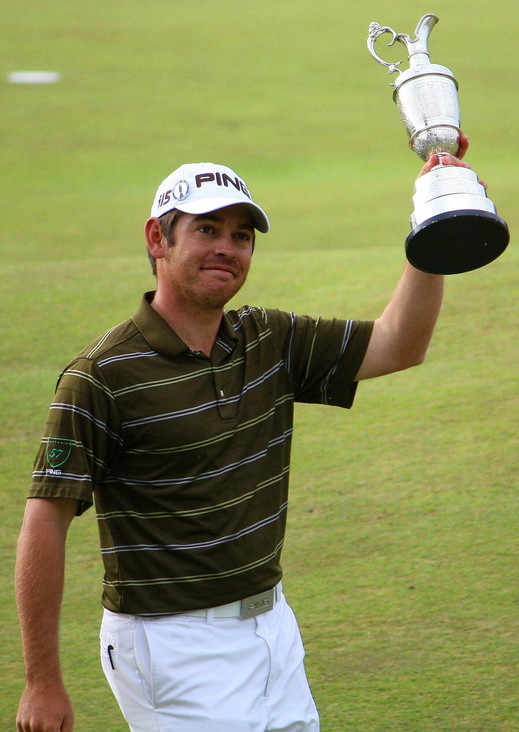 It’s a commentator’s nightmare: a name you can’t quite pronounce leading the field at golf’s most venerable championship. South African Louis Oosthuizen — nicknamed Shrek — offered stumbling broadcasters a host of tantalising possibilities, ranging from “Oosthousen” to “Oosterhazen”, for those who can never resist adding that extra syllable.

After the damp squibs that were Wimbledon finals weekend and the World Cup final, this Great Summer of Sport needed an exciting finish almost as much as BP needs an airtight seal or a new CEO. As Oosthuizen, a rank outsider at the start of the tournament, went into the final round at St Andrews with a 4-shot lead over England’s Paul Casey, we hoped for an afternoon of thrills.

The good news — according to the BBC — was that coverage of the 139th Open Championship was available to some lucky viewers in glorious high-definition. But repeated sightings of John Daly’s latest offenses against golfing fashion — trouser designs that were straight out of a bad acid trip — reminded me why I was quite happy to be watching in plain old standard definition. Though he wasn’t a contender, Long John still made a big impact on the final day, striding up the 18th fairway in his eye-popping stars and stripes pants. As his clothing website helpfully puts it: “John Daly is about being comfortable with who you are”.

It’s not clear to me how “comfortable” Tiger Woods is with his new role as the pariah of world golf. The World Number 1 arrived in Scotland with his reputation still under a cloud and his last major win more than 2 years ago. The new game of “bait the Tiger” is one that some members of press pack seem to relish almost as much as Woods used to enjoy his Rat Pack revelries in Vegas. A winner on this course in 2000 and 2005, he must have been relieved when the competition finally got under way and attention switched from marital meltdown to his new putter. But his performance on the greens was lacklustre by his own high standards, with Tiger finishing at 3 under — 13 shots off the winning score. He was never really in contention.

If first-round leader Rory McIlroy had been in one of the final pairings on Sunday afternoon, Oosthuizen might have endured a much more testing afternoon. A duel involving one of golf’s rising stars would surely have injected some tension into what turned out to be a very pedestrian climax to the event. But after shooting a 63, the tournament’s best ever opening round, McIlroy crashed and burned on Friday with what you might describe as a weather-affected 80. Yes, the 40mph gusts of wind were brutal on the second afternoon: I now know what an anemometer is and how to spell it.

With Woods and McIlroy out of the picture and no “charge” from Phil Mickelson, who would halt Oosthuizen’s unlikely run to his first major? Home fans looked forward to a challenge from Shrek’s playing partner Paul Casey, who began the day four shots behind, or from golf’s “nearly man” Lee Westwood. But I was more curious to see what would happen to the smartly attired Henrik Stenson, if he was careless enough to put his ball into the Swilken Burn. Last year the Swede provided some much-needed thrills for female fans, when he stripped to his underwear to play a ball out of a muddy lie during the WGC-CA event.

But any possibility of a dramatic or even mildly intriguing finish disappeared in a welter of mediocre putting and dropped shots from the rest of the field. The commentators kept trying to convince us that there was still time for the South African to screw things up, but a magnificent eagle on the 9th effectively ended that possibility. There never seemed the remotest chance that this steadiest of competitors, who strode the course with a broad smile on his face, was going to lose his nerve. You wondered whether the cosy chats with Casey were part of a cunning plan to dent the killer instinct of his nearest rival. But the truth is that Casey never looked remotely likely to mount a challenge — especially after a triple bogey on the 12th. Oosthuizen finished on 16-under par — 7 shots ahead of Westwood.

A week ago, the family of Nelson Mandela complained that the frail former President was being put under pressure to attend the closing stages of the World Cup. I guess those bully boys from Fifa just won’t take no for an answer. It’s somehow fitting that Mandela’s 92nd birthday should coincide with a resounding South African victory in the Open Championship, following great names like Bobby Locke, Gary Player and Ernie Els. Many happy returns.