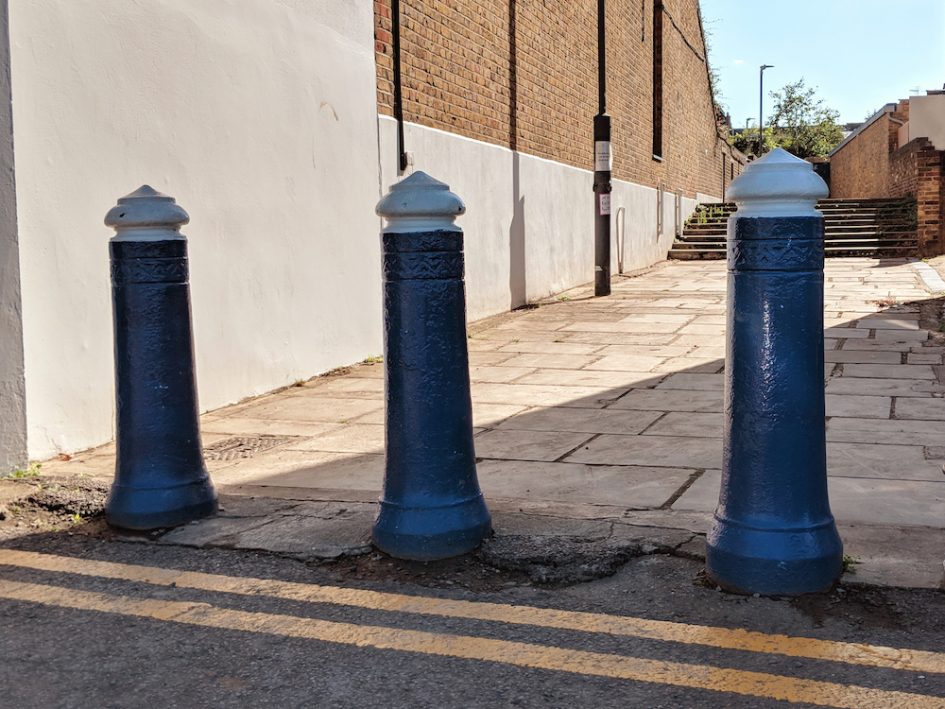 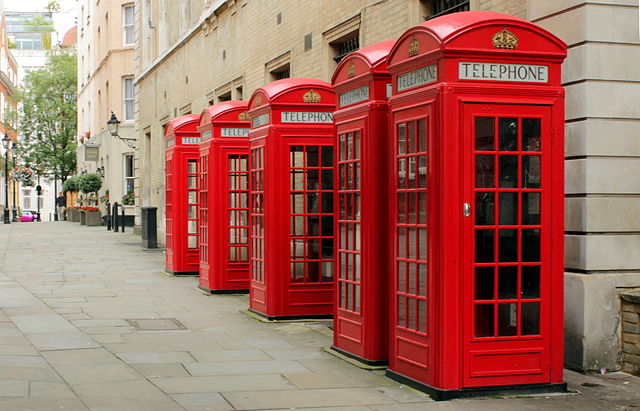 Last night Londonist editor-at-large Matt Brown, author of Everything You Know About London Is Wrong, talked pointless bollards to a sell-out audience of London Society members. I’m not being disrespectful: Matt’s illustrated talk ‘Never mind the bollards’ on London’s extraordinarily varied range of street furniture was fascinating, humorous and, at times, a little risqué.

He began with London’s much loved but now little used red phone boxes. We learned to distinguish between the glazing in Sir Giles Gilbert Scott’s iconic K2 (short for Kiosk No. 2) and the later (and smaller) K6 models. Gilbert Scott’s other works include Battersea Power Station and Waterloo Bridge, which is probably why the K2 is now iconic and its (attractive) K1 predecessors are not.

The K2 is a thing of beauty – from its elegant domed roof, which was based on Sir John Soane’s tomb, to the ‘cup’ style handle and essential ‘drip cap’ above the door. Huge thanks should go to the Thirties Society (forerunner of C20 Society) for its campaigning work in the 1980s to stop the philistines at British Telecom from destroying the K2 and its successors in the drive for ‘modernisation’.

Some phone boxes have been upcycled for the 21st century, and reinvented as compact retail spaces for ice cream, coffee or books. When I lived in Kensington in the 90s, the booths around Kensington High Street were notable mainly for the huge number of adverts for the services of London’s sex workers.

Matt was enthusiastic about these ‘tart cards’ as ephemera, and he reckoned they would have value to future historians as a record of shifts in social attitudes, sexual tastes and growing proficiency in DIY printing and publishing. I wasn’t convinced. 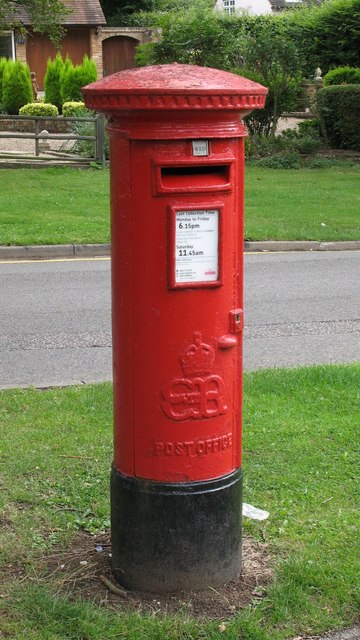 Pillar boxes have also undergone a few makeovers over the years. In the mid-19th century they were green, before the eye-catching crimson look was introduced in 1874. More recently,  some of them have been painted gold in tribute to the feats of our gold medal-winning British athletes at the London 2012 Olympics.

I may have walked past a rare Edward VIII pillar box – there are still a few of them left in London. I suspect they smell a lot better than urine deflectors,  an urban innovation of which I was blissfully unaware until last night. According to Matt’s blog, many of them ‘hide in plain sight’, though I suspect none of these sloping surfaces is likely to be winning a design award. 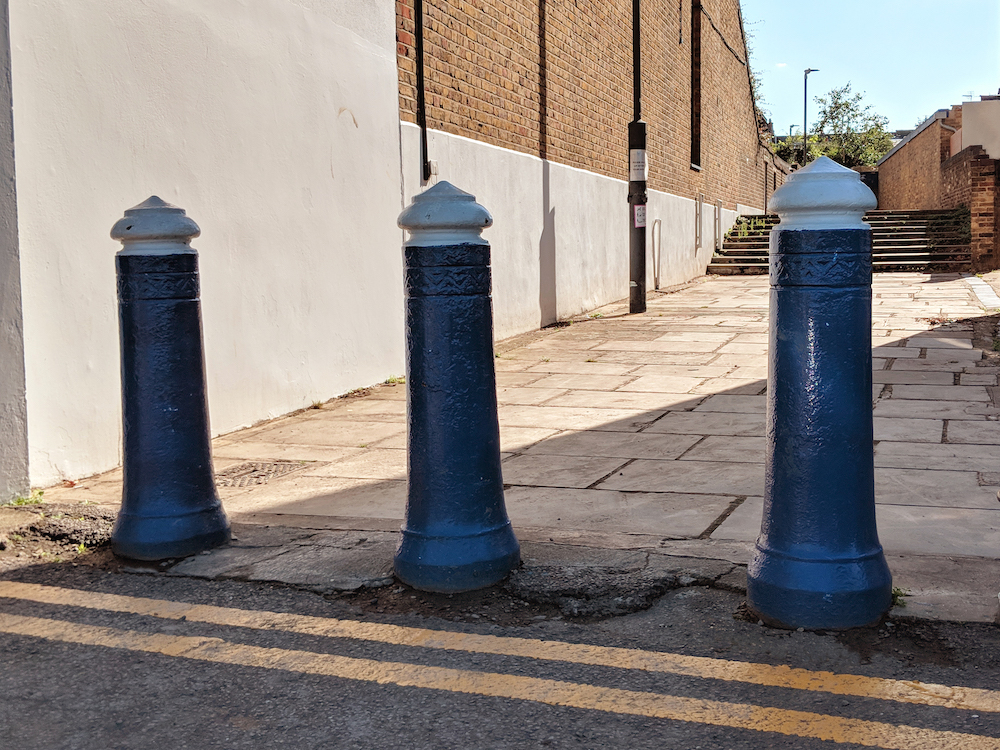 A trio of bollards standing guard at the junction with Putney Embankment, London (By Potatoradius – Own work, CC BY-SA 4.0, https://commons.wikimedia.org/w/index.php?curid=72872868)

The climax of the evening was the section on bollards. From repurposed French cannons, to cast-iron bells and ‘bell-ends’ (bollards are often phallic in shape), these weighty pieces of street furniture act as traffic and security barriers.

Just off the King’s Road, Chelsea you can see Allister Bowtell’s ‘Two Pupils’ sculpture, featuring a young boy leapfrogging an old bollard. Clearly you get a better class of bollard in SW3 because I’ve got some very ugly, pebble-dashed ones near my home in Pinner. 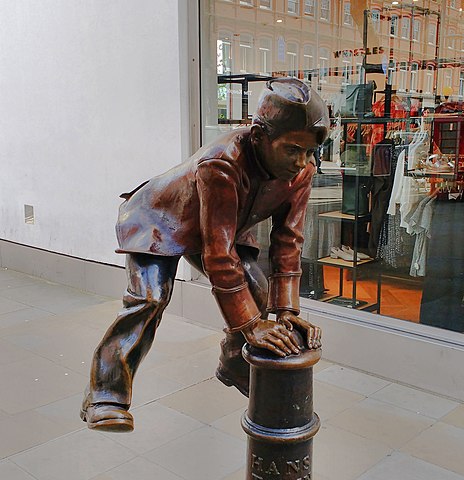 The biography of Matt Brown on the Londonist website describes him as ‘probably the most London-obsessed person in the world’, but judging by the level of knowledge and nerdiness in last night’s audience I’d say there are several London Society members who could challenge him for that title.

I came away enlightened and entertained, but also reminded that despite the fact that I’ve been living in London for 30 years I still have a lot to learn about my environment. With the help of Diamond Geezer’s excellent blog – recently recommended to me by my polymath plumber – I hope to become better informed about everything from bus routes to bollards.