The final room of Ocean Liners: Speed and Style offers a sombre reminder of the perils of sea travel. A piece of carved wooden panel salvaged from the RMS Titanic is displayed bobbing gently on a simulated sheet of water. The ill-fated liner sank on its maiden voyage in April 1912. This chunk of wood from the first-class lounge speaks more eloquently of what was lost that night than photos, passenger lists or James Cameron’s titanically boring 1997 movie (also featured in this exhibition).

The latest blockbuster show at the V&A features more than 250 objects – from posters, paintings and wall panels to evening wear and two-piece bathing suits. It delivers all the elegance, extravagance and design flair you’d expect from an era when Britain still ruled the waves and shipbuilding was booming on the Clyde, the Mersey, on Tyneside and at Harland and Wolff in Belfast.

The inclusion of scale models, engines and the painting ‘Riveters’ – one of the panels from Stanley Spencer’s  Second World War series Shipbuilding on the Clyde – reflects the achievements of those who actually built these great vessels. You can’t get much more heavy-duty industrial than a sepia portrait of Isambard Kingdom Brunel posing in a stovepipe hat in front of the massive launching chains of the Great Eastern in 1857.

Most visitors to Ocean Liners: Speed and Style won’t be drawn to the nuts and bolts but to the sheer luxury that seeped into every aspect of the furniture, fashion and interior design. From the late 19th century until the end of the 1960s, well-heeled passengers enjoyed all the trappings of a floating stately home on ships like the Normandie, the Queen Mary, the Olympic and the Lusitania.

Many of the great names in British design are represented in this exhibition, including Eileen Gray and Ernest Race, who both designed chairs suitable for lounging on deck (at sea or at home). There is tableware by Edward Bawden and his colourful mid-century English Pub Mural, which was designed for the SS Oronsay.

William De Morgan’s beautiful tulip design on the earthenwire tile panel for P&O’s the Sutlej dates from around 1882 and is one of my favourite objects in the exhibition. 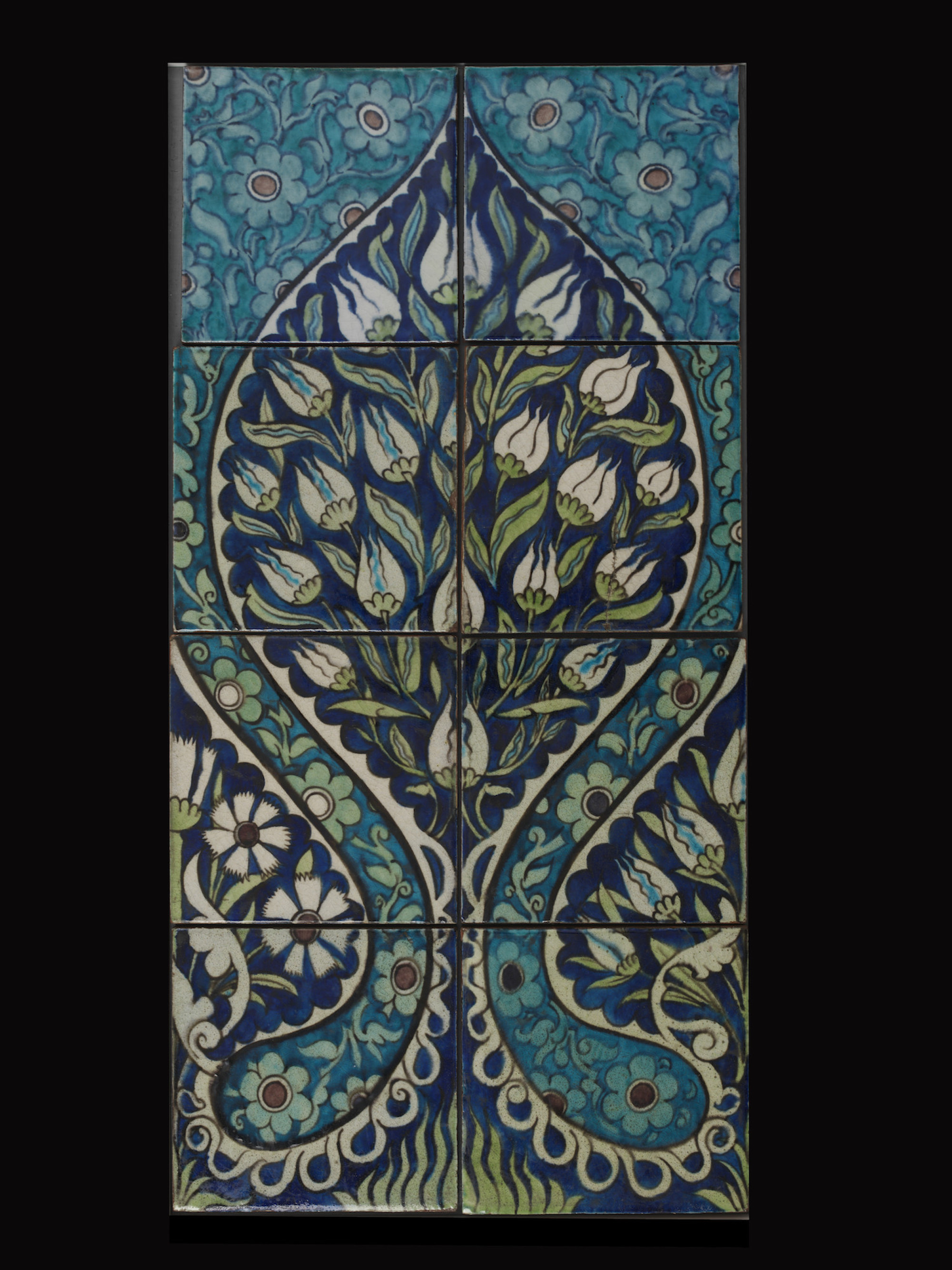 But it was Art Deco that really put the wow factor into the golden age of ocean travel, with the French-built SS Normandie exemplifying the virtues of ‘speed and style’. One of the most spectacular features of this show is a 5-metre-high lacquered gold-leaf panel,  depicting idealised bodies in athletic poses (‘Les Sports’). The non-athletic types enjoying the smoking lounge of the Normandie during the 1930s were no doubt left breathless with admiration.

There’s always a point in a V&A exhibition where I’m stopped in my tracks by the sheer scale and imagination of what I’m seeing. In 2016 there was an attempt to recreate the sights and sounds of Woodstock at the climax of You Say You Want a Revolution? (Records and Rebels 1966-1970).

This time they’ve tried to recapture the elegance and hedonism of life on the ocean wave for those with oodles of money and a wardrobe to match. Mannequins lounge around a 30s-style deck pool, while behind a big screen shows a liner gliding by on the cool blue waters. Night-time brings a fashion parade, as guests make their ‘grande descente’ down the staircase before dinner, showing off the latest evening wear by Lanvin. It’s all brought together under a simulated starlit sky.

Also sparkling was Lady Marguerite Allan’s stunning Cartier tiara, which was commissioned by her Canadian husband in around 1909. She was travelling on the RMS Lusitania to England with two of her daughters, when the ship was torpedoed by a German U-boat in May 1915. Lady Marguerite and her tiara survived, but her daughters were among the 1,198 passengers who died.

The Titanic and the Lusitania are not the only ill-starred vessels in Ocean Liners: Speed and Style. The magnificent Normandie was only in service for a few years from 1935, before being commandeered for a troop ship in 1942. She caught fire, capsized and was eventually scrapped.

Turbo-electric power and Art Deco style are all very well, but you can’t put a price on good timing.

Ocean Liners: Speed and Style continues at the V&A until 17 June 2018