Back to black: seven things I love about vinyl records 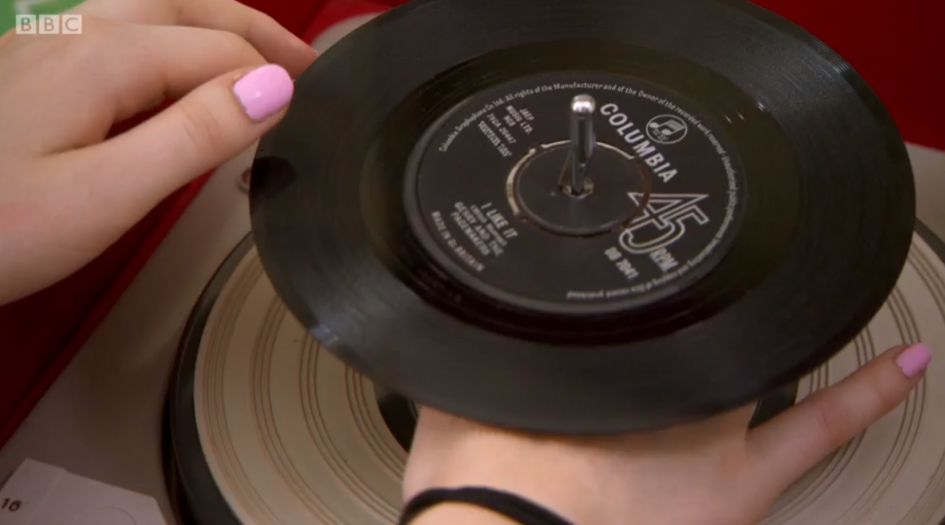 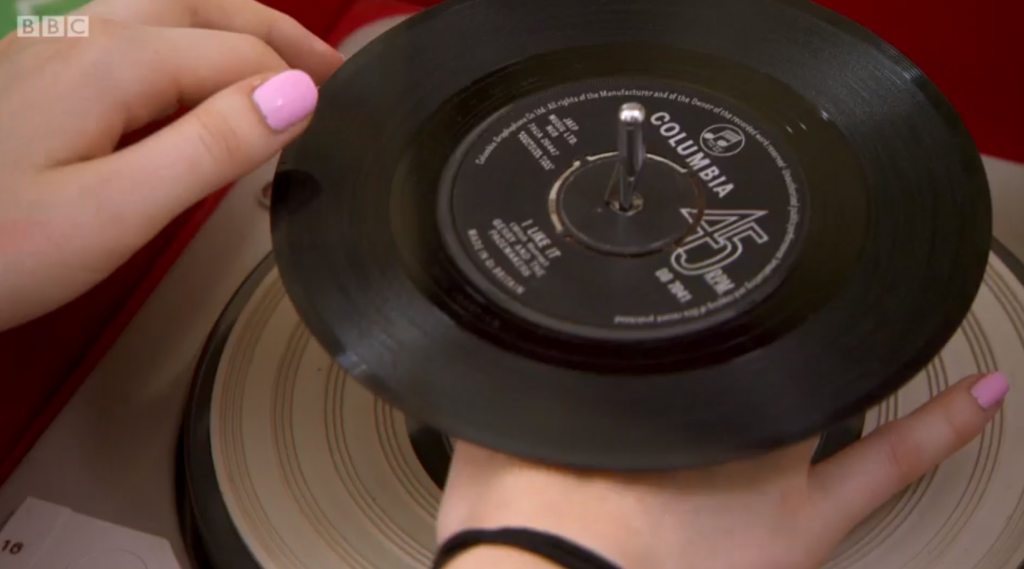 On a recent episode of the BBC’s Back in Time for the Weekend we got a timely reminder that vinyl records still have the wow factor. I thought teenager Daisy Ashby-Hawkins would be far too entrenched in the world of iMusic to be impressed by a pile of old 45s. But there she was in her bedroom, hunched over the sort of “portable music player” that doesn’t fit in your pocket. “That’s so cool!” 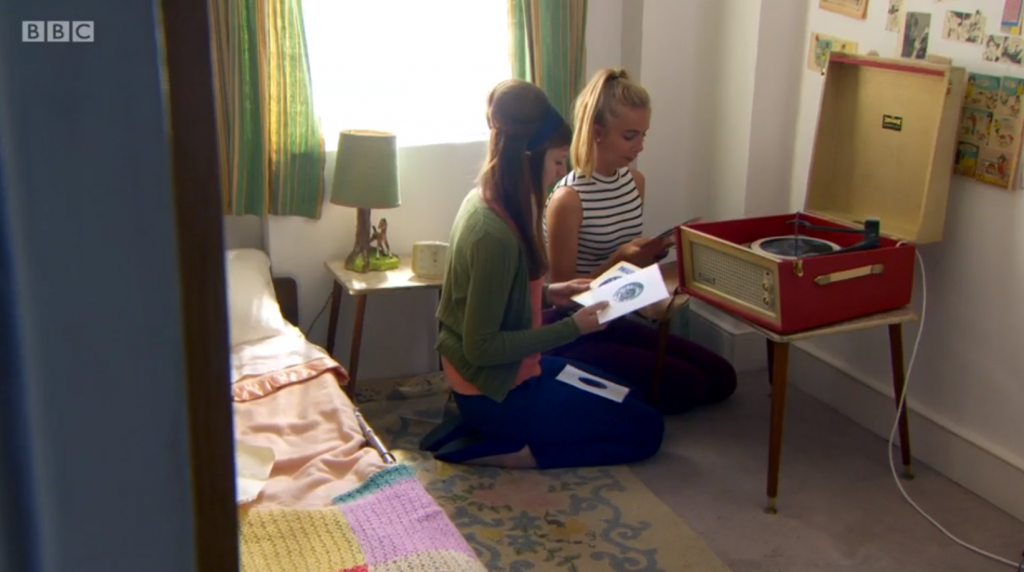 When portable music was plugged in

I jettisoned my turntable in the late 80s and put my my LP collection into storage, to make way for tape cassettes, CDs and (eventually) an iPod. This was a bad move, as some of my cherished LP covers went mouldy in my parents’ basement. Harnessing the digital power of Shazam, YouTube and iTunes, I embraced the convenience of being able to locate almost any song I wanted within seconds.

But lately I’ve been thinking there might be a vinyl-shaped hole in my life. After all, there’s more to music than MP3s, playlists and trying to navigate your way around the latest iTunes update. I’ll leave the analysis of why vinyl sounds better than digital to the purists. Here’s what I have missed:

The beauty of LP cover artwork

I used to spend many happy hours scrolling through the cover flow view on my iMac, until Apple’s media mismanagement system got rid of its best feature. But digital approximations are no substitute for holding real record sleeves. In its glory years of the 60s and 70s, the LP cover was art for the masses – affordable, available and a perfect adjunct to the aural experience. I picked up The Beatles Sgt. Pepper and Rubber Soul on vinyl in a charity shop a few months ago, for a pound each. Priceless. 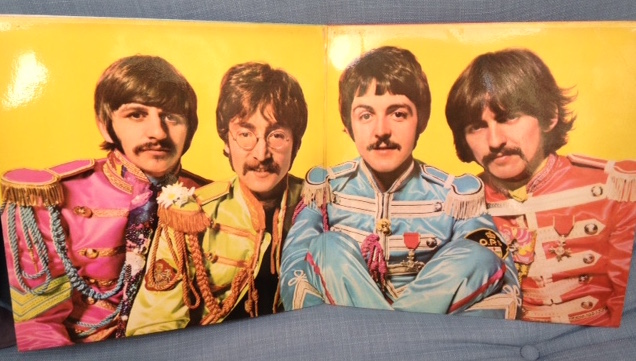 The Fab Four have taken up residence on my sofa

You can read the lyrics on a record sleeve

Even before I needed glasses for reading I knew that CD booklets were just too miniaturised to do justice to lyrics, track listings or band info.

Nothing says I’m a collector quite like a meticulously catalogued wall of vinyl. In the cut-throat legal drama Suits, Harvey Specter prides himself on his spotless records in litigation and in vinyl. 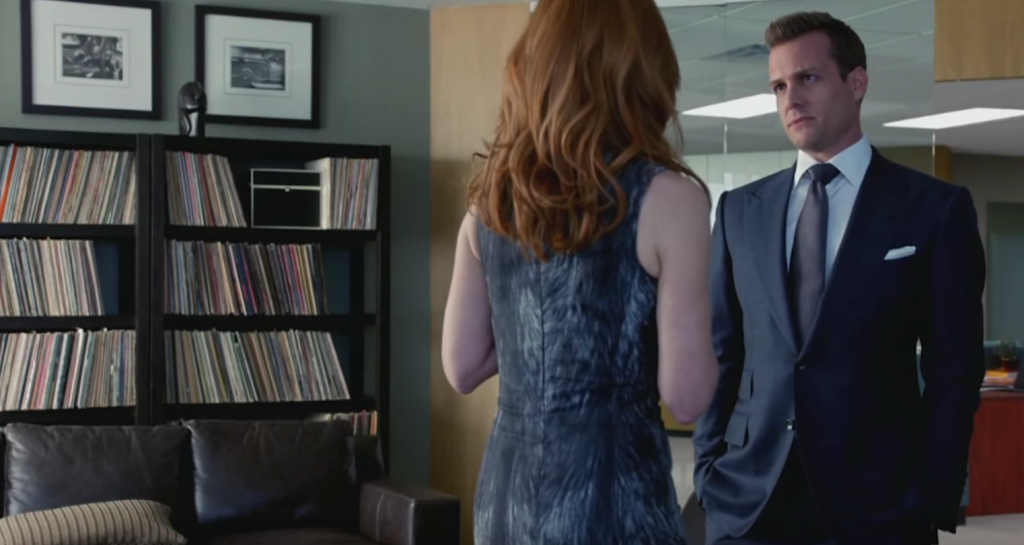 Has Donna been messing with Harvey’s wall of sounds?

“Do I go with Oscar Peterson or Bartok’s String Quartet No. 5?” Vinyl has given us many classic movie moments, including Woody Allen’s futile attempt to look cool before a blind date in Play It Again, Sam, by leaving his precious vinyl where it will be seen. 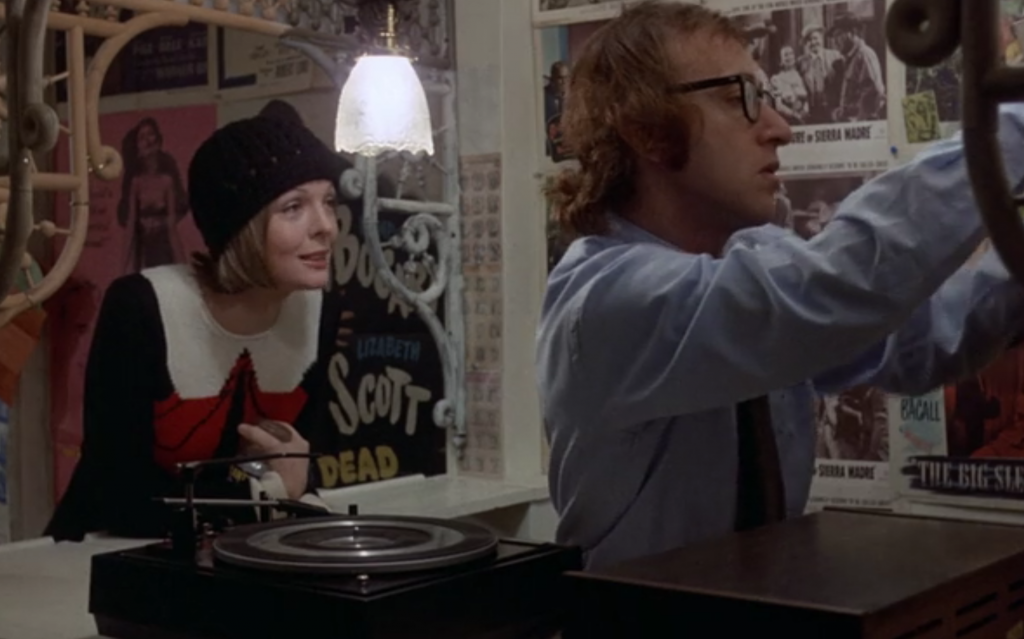 The fragility of vinyl records

Can you really value something unless there’s a risk that it will be damaged or lost? The snap, crackle and pop of my favourite LPs gave them character and uniqueness, despite the fact that they were mass produced. One day they would wear out.

The ceremony of vinyl

In these days of swipe ‘n’ play, I select music by putting fingermarks on the touchscreen of my phone. How different from the elaborate procedure of carefully wiping dust off the surface of a record, cleaning the needle and then sitting back to enjoy.

Records had a beginning, a hole in the middle and an end

Shuffle. Repeat. Add to playlist. Do you ever listen to an LP in its entirety now? I had almost forgotten that albums used to be recorded to be heard in a certain order, sometimes with tracks segueing into one another. You wouldn’t read book chapters in random order, would you?

Back in Time for the Weekend, LPs, Play It Again Sam, Suits, The Beatles, Vinyl records, Woody Allen