Have yourself a Morecambe and Wise-free Christmas

Excluding Morecambe and Wise from the festivities would be as unthinkable as sticking cigarette advertising on the side of the manger, or pouring sweet and sour sauce over your turkey dinner

Nothing says Christmas quite like yet more repeats of Morecambe and Wise. In a post-Christmas-lunch-induced torpor I sat through some of Morecambe & Wise In Pieces on BBC2. This hour-long show was billed as a celebration of the duo’s “most memorable and well-loved sketches”.

This year Morecambe and Wise were served up with a delectable accompanying dish of Dame Penelope Keith – aka the imperious Margo Leadbetter from vintage BBC sitcom The Good Life. All three are icons of the (now very tarnished) golden age of BBC TV in the 1970s and 80s – that innocent time in which Jimmy Savile was still venerated as an altruistic, cigar-chomping eccentric. How things have changed.

By Boxing Day night, the late lamented comedians (Eric Morecambe died in 1984 and Ernie Wise in 1999) had skipped over to Channel 5. There Morecambe & Wise Live! 1973 formed the meat in a cross-generational comedy sandwich of Rob Brydon and Tommy Cooper.

Of course Eric and Ernie are a Yuletide institution, and only a Scrooge like me would suggest otherwise. Excluding them from the festivities would be as unthinkable as sticking cigarette advertising on the side of the manger, or pouring sweet and sour sauce over your turkey dinner before flambeeing the Brussels sprouts.

But as you’ve probably guessed by now, I don’t like Morecambe and Wise. I didn’t find them funny in their 70s heyday, and despite my advancing years I’m still not moved to helpless laughter when they sidle back onto our screens during December.

So I deliberately didn’t use the word “watch” in my opening paragraph because Eric and Ernie form part of a rarely changing backdrop of Christmas TV that doesn’t demand my attention.

On the plus side,  Morecambe and Wise are reassuringly inoffensive by today’s expletive-ridden standards. Their schoolboy humour and ritual mockery of each other and their guests – Andre Previn (“Mr Preview), Shirley Bassey and Glenda Jackson – is still family friendly. You wouldn’t feel embarrassed to watch them with your granny, although she would probably have to explain who those 70s A-listers were.

It’s not that I don’t appreciate TV nostalgia at Christmas. I used to look forward to watching Judy Garland warbling her way through Meet Me in St Louis, or staying up for BBC2’s post-midnight offerings from the world of film noir or the House of Hammer. As a kid I could even enjoy a Yuletide season of Elvis Presley musicals – it helped pass those awkward hours between opening my presents and sitting down to lunch. I was less discerning in those days.

No, my gripe is that the diet of rehashed repeats is so predictable at this time of year and so heavily dominated by the 70s, a decade from which BBC executives and schedulers in particular seem unable to extricate themselves.

The ongoing veneration of 70s TV reminds me of “The Speech”, an episode of a more recent comedy classic, The IT Crowd. Moss (Richard Ayoade) and Roy (Chris O’Dowd) con clueless IT “relationship manager” Jen (Katherine Parkinson) into believing that the whole of the internet is contained in just one small and rather unimpressive-looking black box that has recently been demagnetised by none other than Stephen Hawking.

I imagine that the bosses at the BBC are a bit like those gullible (non-techy) employees at Reynholm Industries. They’re all in thrall to a small box in which a whole decade of 70s TV has been lovingly preserved for future generations. Every year they bring it out and pray over it, before once again revealing its treasures for the telly-watching masses.

So let’s go cold turkey next year and just cut Eric and Ernie from all the channels, along with The Good Life, the Carry On films and the execrable On the Buses. If you love this stuff (I am a big fan of the early Carry Ons) you can still get your fix on other “platforms”. 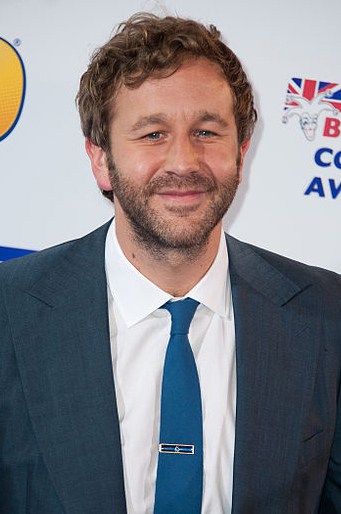 Have you tried turning him off and on again? The IT Crowd’s Chris O’Dowd (pic Christopher William Adach)

In our house we had the internet on loan for Christmas Day so we could watch back-to-back episodes of The IT Crowd. My nephew, Gadget Boy, had a new smart watch and his dad had just been given a Chromecast, to convert the box into a wi-fi enabled wonder.

Our comedy fix was handily streamed from Gadget Boy’s wrist to the TV screen, without any interference from schedulers or 70s obsessives.

I wonder what everyone will be watching in 40 years’ time. I hope it’s not Morecambe and Wise.