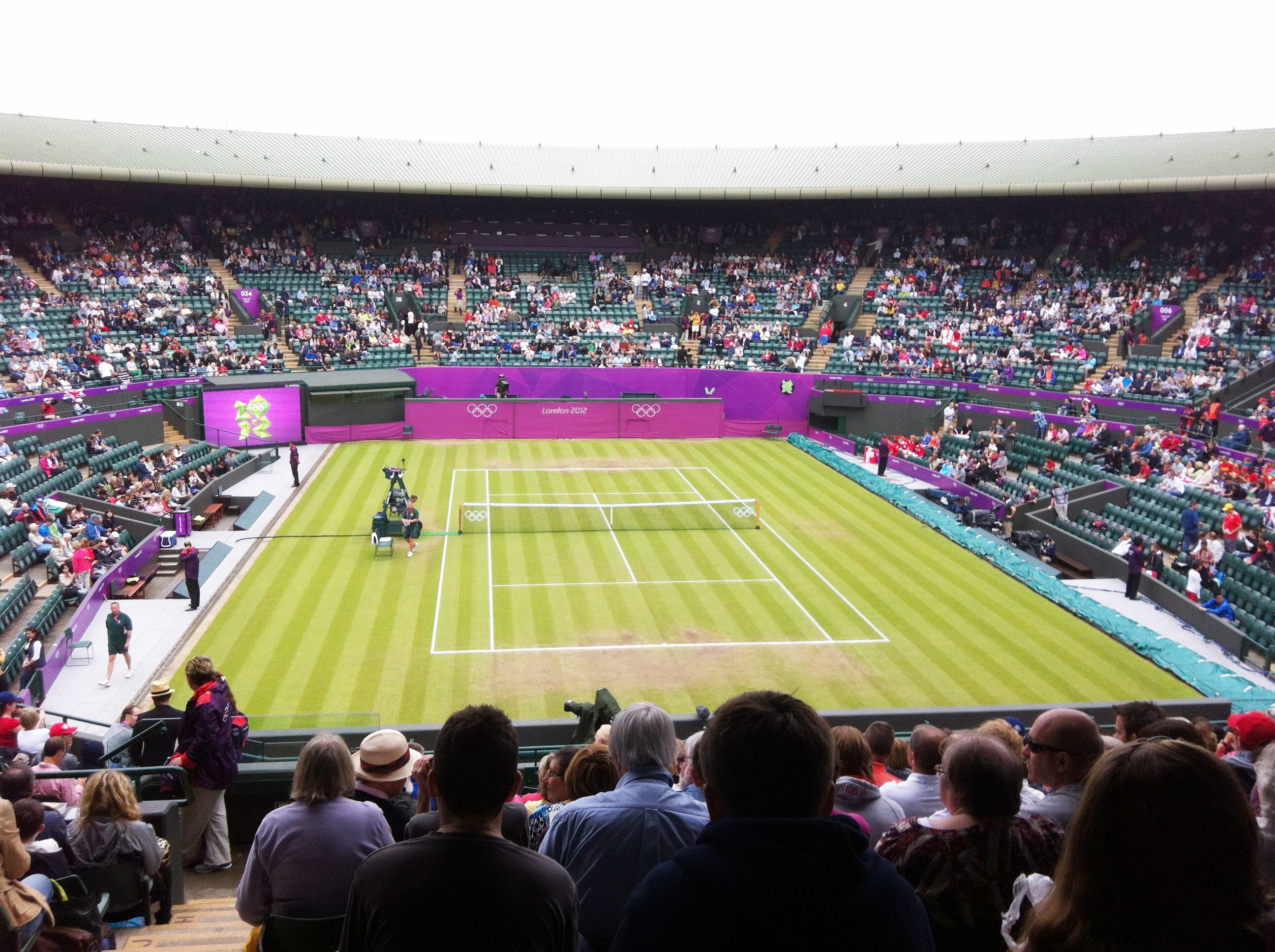 Does the Olympics really need tennis? Until my visit to the All England Club yesterday, I’m one of those who would have questioned the point of holding an attenuated version of the world’s greatest tennis tournament so soon after Wimbledon 2012. Perhaps it was the rare appearance of the sun, or the sheer enthusiasm of all the 2012 volunteers, but I left SW19 feeling that “Inspire a Generation” might be more than just an empty slogan.

First up on Court 1 was reigning Wimbledon Champion, Roger Federer, against Uzbekistan’s most famous export, Denis Istomin. Other superheroes might wear a red cape or mask, but the “Federator” was sporting an elegant red shirt, with matching head and wristbands. I’m not Federer’s biggest admirer, but watching him in action must be somewhere on that list of 1001 things to do before you die. Bamboozling opponents with his spins, slices and unerring placement, Roger could be the tennis equivalent of the Taj Mahal. Not white marble perfection, but poetry in motion — and not a drop of sweat in sight.

You can’t really appreciate the genius of the man on TV, because you’re constantly distracted by the fawning commentary and the sight of Roger rearranging his well-tended locks so as not to obscure the sponsor’s “swoosh”. Unfortunately, it would have taken something much larger than Federer’s head to obscure that very uninspiring London 2012 logo, which is on display around Wimbledon this week. Nike’s ubiquitous “swoosh” is a design classic; the London 2012 logo is like a clumsy rearrangement of a second-rate Matisse cut-out, and it looks even worse in green than it does in pink.

Wimbledon has been subtly rebranded for the Olympic tennis event. With a three-set singles format (apart from the men’s final) and no third set in the mixed, there’s less chance of an Isneresque marathon. But it’s the colourful new look of the place and the hordes of young volunteers manning everything from security to the catering outlets that make this feel like a different event. They’re also pumping pop music into an arena that’s previously been the sole domain of Cliff Richard.

Centre Court is still wreathed in ivy and the courts look almost as pristine as Roger’s shoes — despite the recent wear and tear. But the classic Wimbledon green and purple palette has been replaced by something a bit brasher, and the players aren’t restricted to predominantly white attire. Radek Stepanek’s blue and red shoes fell foul of the tournament’s rules this year, but they were conservative compared with the gaudy green, yellow and red London 2012 footwear designed for India’s doubles maestro, Leander Paes. 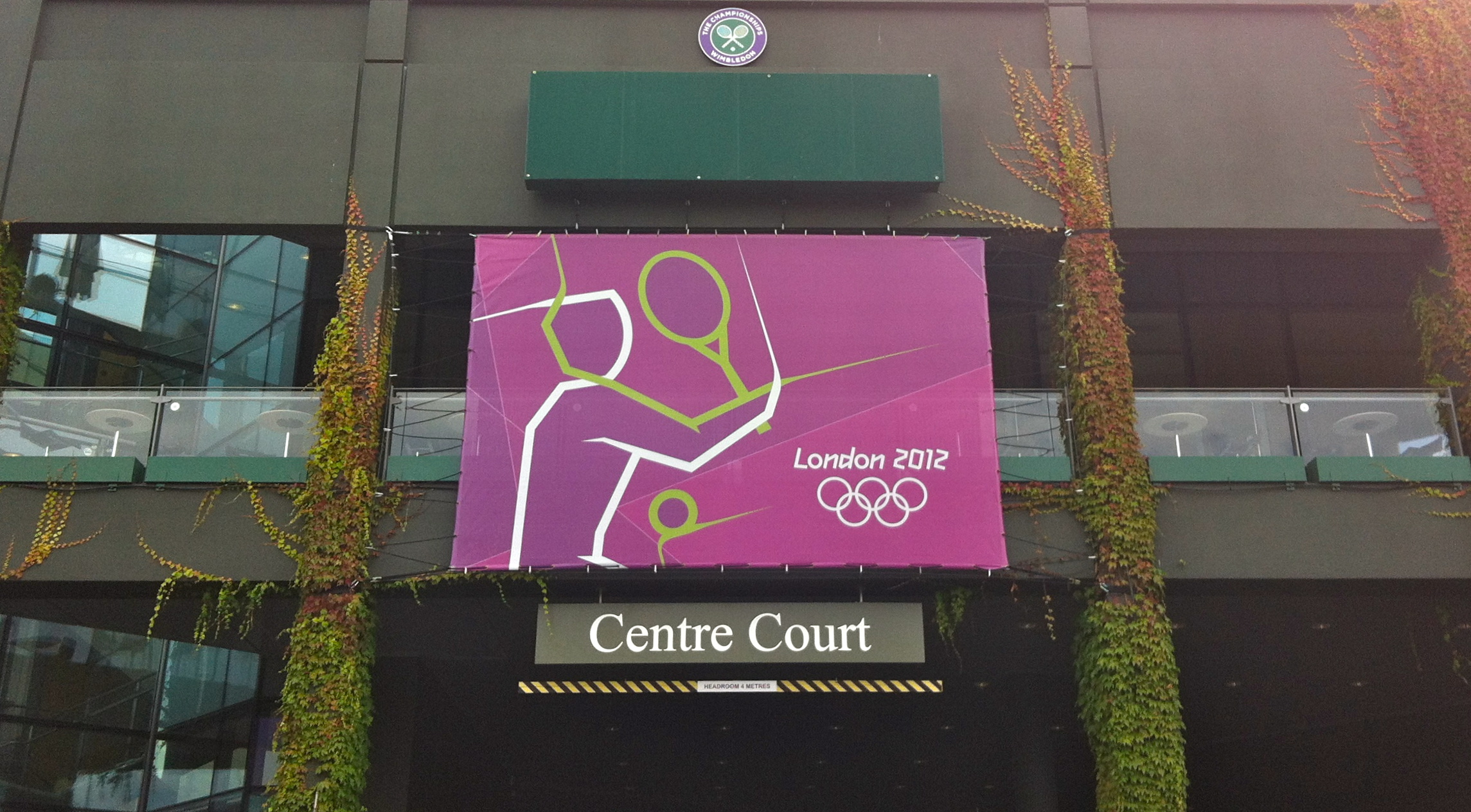 Judging by the number of flags and brightly painted faces I saw, fans are embracing the fact that Olympic tennis is about more than just the year-round scramble for dollars and ranking points. Seeing Federer in fetching Swiss red or Andy Murray in patriotic shades of blue makes them more identifiable as representatives of their country. But I can’t work out what Istomin’s dreary black and white ensemble had to do with the Uzbekistan national colours.

Though the fans were loudly supporting their home nation, there was room for plenty more of them. The grounds were emptier and the queues shorter than on my previous visits to Wimbledon. It felt like another ticketing fiasco, but perhaps they’d all just migrated to the overstocked 2012 shop or to Murray Mount to watch Britain’s Number 1 in action on Centre Court.

Back on Court 1, top seed Victoria Azarenka was doing her best to “Inspire a Generation” by wearing down Russia’s Nadia Petrova. Like John McEnroe, I used to think that Azarenka was the most famous living sportswoman from Belarus. We were both wrong. “Mother of Gymnastics” Olga Korbut, who rivalled Mark Spitz as the superstar of the 1972 Munich Olympics, is also Belarusian.

But Vika7 (as she’s known on Twitter) was entertaining the younger fans not with her crushing baseline game but by the trademark “whoop” that accompanies every shot. After a few minutes I realised that the on-court racket was being copied — even mocked — by some of the kids in the stands. “Why is she making that noise?” asked the seven-year-old girl behind me. To his credit, her dad came up with a very plausible explanation about “effort”.

Azarenka went through to the semi-final today, beating Germany’s Angelique Kerber. If she wins a gold medal this weekend, I just hope it’s her tennis and not her extravagant vocal performance that echoes down the years and inspires a generation.