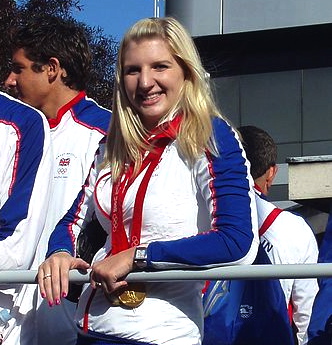 For years the BBC’s voice of swimming was the unfortunately named Hamilton Bland, whose TV career ended in controversy in the late 90s. There’s nothing bland about his successors, former Olympians Adrian Moorhouse and Andy Jameson, who sounded as though they’d swallowed several gallons of Red Bull as they jabbered their way through last night’s pool action at London 2012.

There was endless talk about “strong back ends”, which I’m hoping was a reference to the swimming rather than the anatomies of some of the more well-built competitors. Andy, a butterfly bronze medallist in Seoul, foolishly attempted a critique of a breaststroker’s technique and was gleefully slapped down by his more clued-up partner. (Moorhouse took gold in the 100m breaststroke in 1988.)

Through all the chortling and frequent cries of “I’m so excited!”, I sometimes lost track of what was going on in the water. But with the ongoing furore about empty seats at Olympic venues, it was good to hear the Aquatics Centre buzzing with the sound of excited fans and even more excited BBC commentators.

You couldn’t help getting caught up in the atmosphere, as our Beijing golden girl Becky Adlington picked up a hard-earned bronze medal in the women’s 400m freestyle final. Moorhouse and Jameson were both genuinely thrilled as perennial underachievers France beat Michael Phelps’s USA team in a closely contested 4 x 100-metre freestyle relay.

These are testing times for TV viewers who don’t like sport, with up to 24 live streams broadcasting Olympic events on the BBC website. Even if you couldn’t care less about the rivalry between prolific medallist Phelps and Hunk of the Moment, Ryan Lochtie, the interaction between the various BBC pairings was intriguing.

On Saturday the men’s cycling road race featured just two beleaguered commentators (Chris Boardman and Hugh Porter) and one unbelievably tactless interviewer, Jill Douglas. (She won’t be getting an invite to Alexandre Vinokourov’s retirement bash.) But for the swimming, the “Andy ‘n’ Adey” double act was backed up by Sharron Davies asking the questions, with Clare Balding and Mark Foster perched above the pool.

With her sensible haircut and no-nonsense approach, Clare increasingly reminds me of the school games mistress who used to counsel us against the dangers of sitting on hot radiators. Balding has drawn criticism for questioning the extraordinary performance of China’s 16-year-old Ye Shiwen, who won gold in a world record time in the women’s 400m individual medley. (She swam faster than her male counterpart, Ryan Lochte.)

Needless to say, the Beeb has defended Clare’s right to raise this thorny issue with her co-presenter, Mark Foster. But I think many female viewers will also be asking whether poster-boy Foster has an all-over tan and — more important — what the hell is wrong with Ian Thorpe?

Australia’s “Thorpedo” was watching the action from the BBC’s Olympic Studio with host Gary Lineker. Neither of them looked particularly happy. Away from Match of the Day, Gary doesn’t have a whole lot to offer, apart from talking up Britain’s medal prospects and introducing frequent puntastic (“Oarsome”) tasters for forthcoming attractions.

The fashion-conscious Thorpe, obviously knows swimming inside out — he’s got five Olympic gold medals in his bulging trophy cabinet. But he looks miserable about being wheeled out as the BBC’s star pundit on the swimming action. Seeing him tear up every time he talked about his own glorious days as a teenage swimming prodigy, was like watching a lachrymose James Dean wind himself up for a particularly strenuous bout of method acting.

Cheer up, Thorpey, you’re only stuck with Lineker for a couple of weeks — we have to put up him 52 weeks of the year.