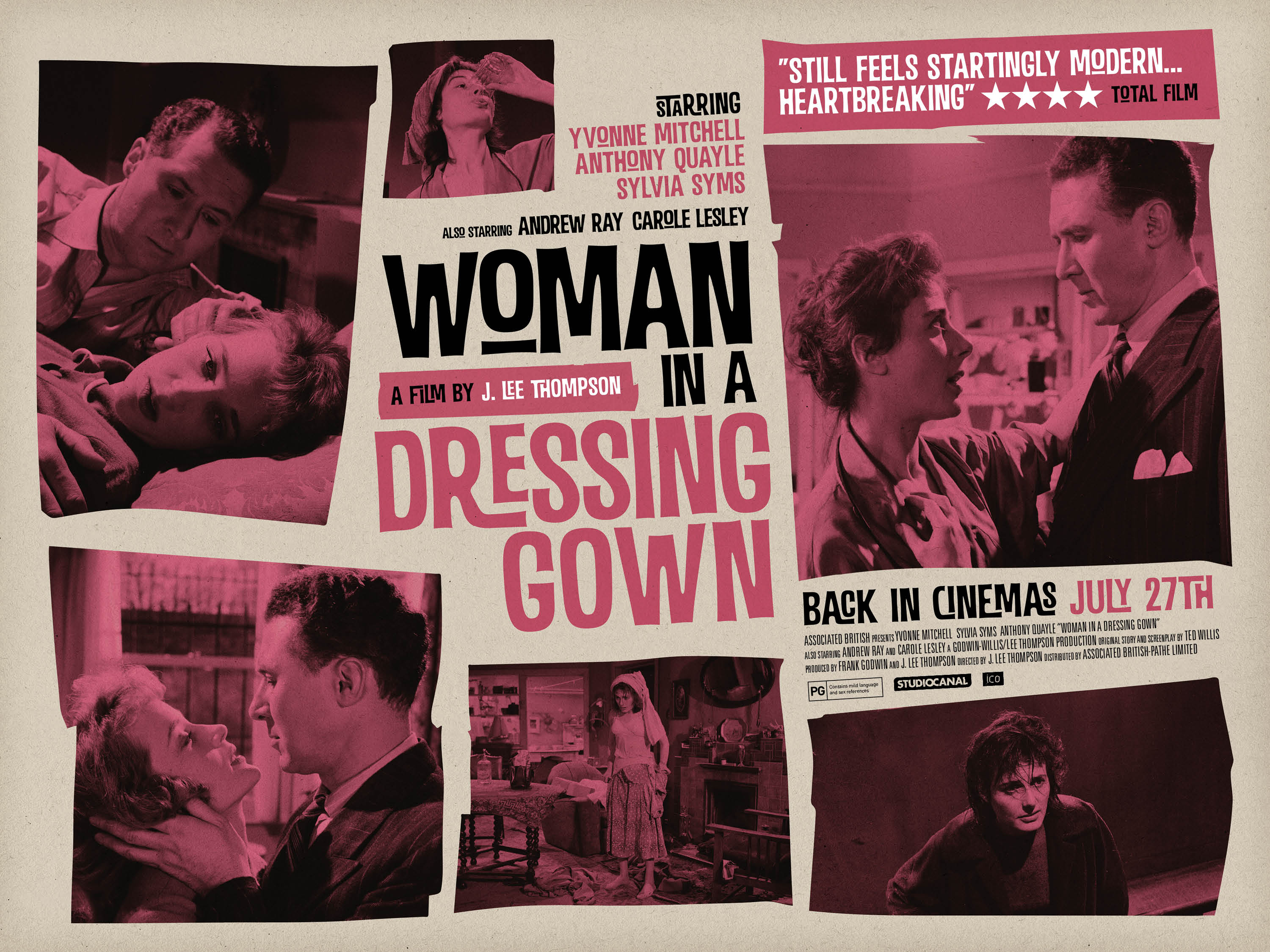 “You work like a horse but you never seem to get anywhere.” After decades in the cinematic wilderness, director J Lee Thompson’s Woman in a Dressing Gown returns to cinemas this week, reminding us how tough it was to be a desperate housewife in drab 1950s Britain. The title may be unappealing, but Yvonne Mitchell’s performance is utterly compelling — both in and out of her nightwear.

Middle-aged Amy Preston (Mitchell) lives in a cramped tower block flat, with her dull but dependable husband Jim (Anthony Quayle) and kind-hearted son Brian (Andrew Ray). While the men can escape to their jobs, dowdy Amy struggles to manage her appearance and the multitude of domestic tasks she never quite gets round to finishing.

In a brilliantly edited opening sequence, director J. Lee Thompson (Yield to the Night, Ice Cold in Alex) takes us right to the heart of this kitchen-sink drama. The camera glides around the home, giving us snapshots of Amy’s mundane world — dishes in the sink, a milk bottle next to the newspaper that’s open at the competitions page. We cut between a distracted Amy scraping the recently incinerated toast and her beloved “Jimbo” meticulously shaving in front of the bathroom mirror. His world is neat, ordered and perhaps a little sterile; her world is utterly chaotic.

It’s Sunday, and hard-working Jim tells his trusting wife that he’s off to do some overtime at the timber importers where he works. In reality, he’s spending this day of rest in the arms of a young colleague, the glacially beautiful Georgie (played by Sylvia Syms). Her apartment looks more like something out of Good Housekeeping than Nightmare on Wisteria Lane; she addresses her lover by his surname, as if to emphasise that she really means business. “It’s got to be settled,” she insists, pushing the reluctant Preston towards a heartbreaking decision.

Woman in a Dressing Gown takes a romantic dilemma that we’ve seen many times before and manages to make it seem fresh. That’s down to the well-modulated performances and a judicious use of music and close-ups. I can’t think of many films that have used a soundtrack so effectively to underscore the main character’s emotional journey. 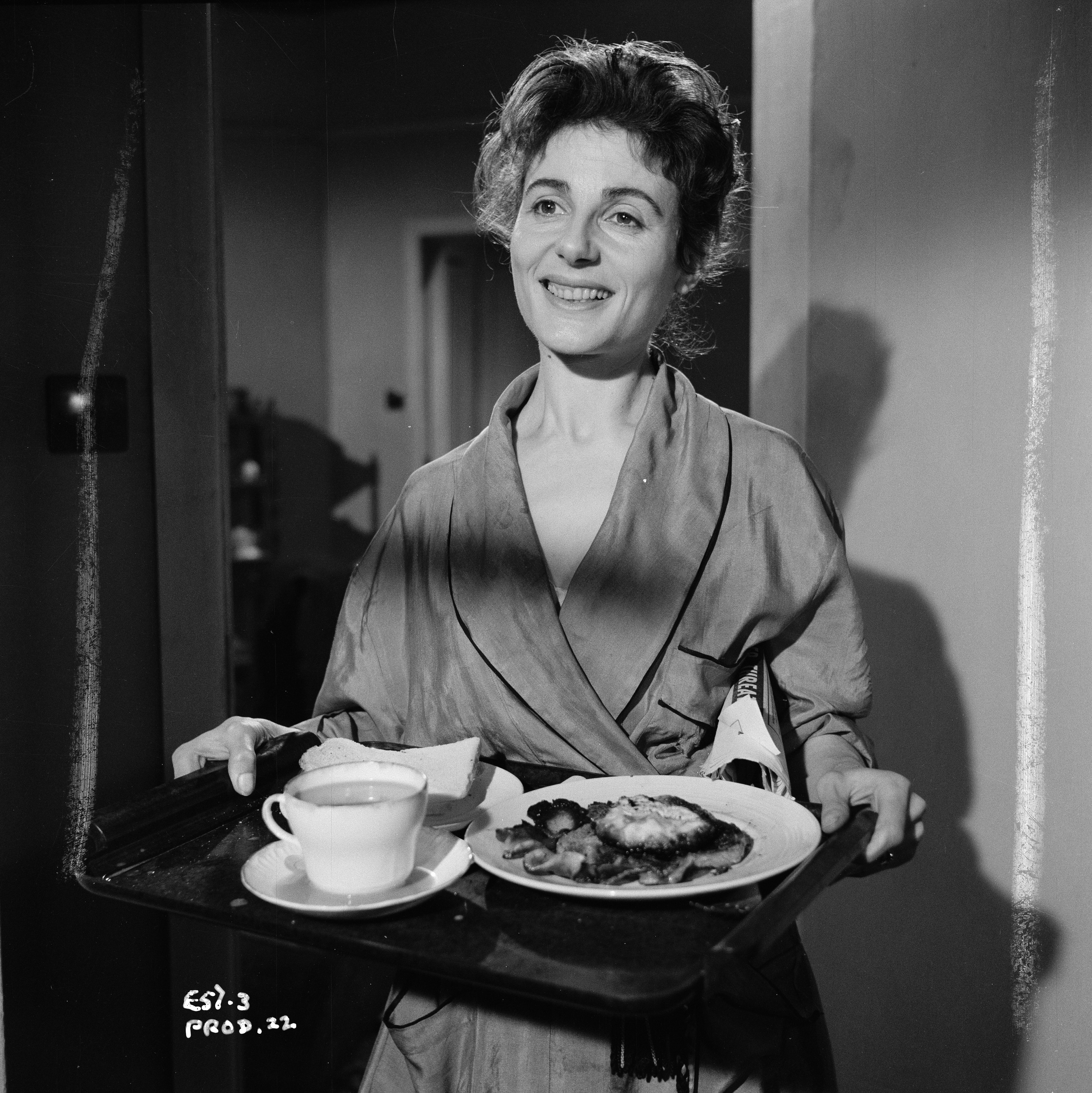 Amy listens to the radio incessantly, and from the opening scenes her changeable mood seems to be reflected in the sounds that fill her home. The light orchestral Housewives’ Choice-type selection that plays over the Prestons’ morning routines, misleads us into thinking that this is domestic harmony. It’s cruelly ironic that she’s later forced to listen to some “groovy” jazz, at what must be the lowest point in her 20-year marriage. As Amy tries to absorb the news of her husband’s infidelity the camera wobbles around, a plate smashes and she is on the point of fainting.

Anthony Quayle brings an unexpected air of old-fashioned decency to his role as the unfaithful but still considerate husband. Amy asks sadly why a glamourpuss like Georgie would even bother with a man like Jim, who’s not “handsome or clever”. But the care with which cinematographer Gilbert Taylor has lit and framed the love scenes makes Jim seem almost heroic rather than contemptible for straying from his marriage.

Some may find Yvonne Mitchell irritating as the hapless wife who can’t hang on to her man. She’s hopelessly scatty, has an irritating laugh and seems pathetically grateful when her husband grudgingly offers to take her to the pub. I think that’s the whole point: Amy is a real woman, not an immaculately groomed domestic goddess, effortlessly dispensing breakfast and bons mots.

If this film had been made in 60s America, we might have seen Amy swap her dull dressing gown for a kaftan and a commune. Instead there’s real anger and anguish here, but probably no escape from domestic servitude for this desperate housewife.