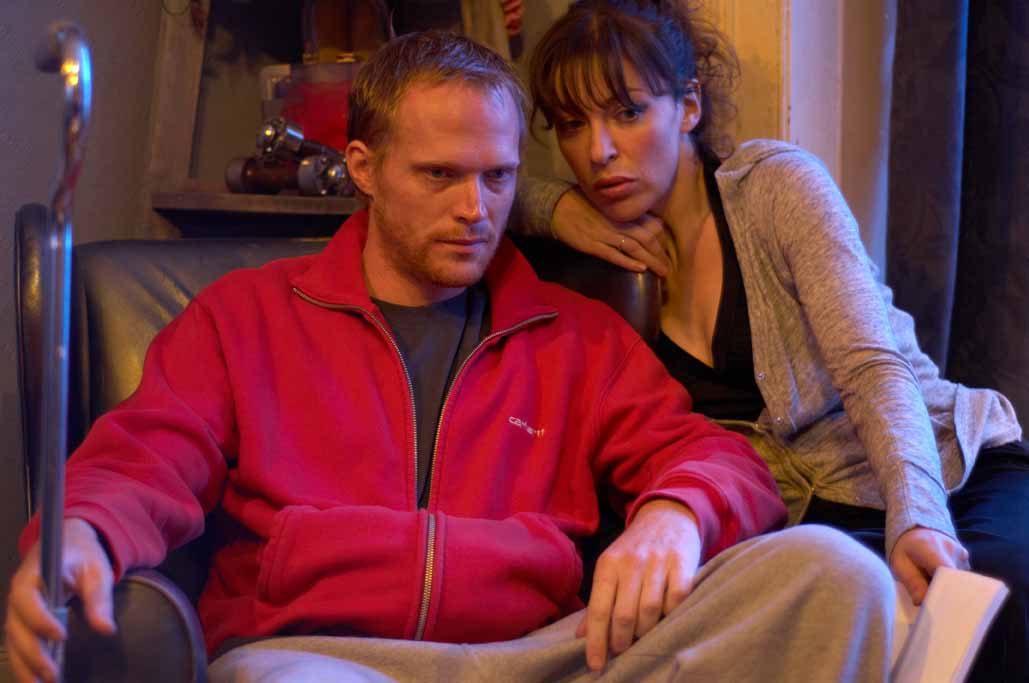 It’s tempting to reach for some tried and trusted sporting clichés to describe Paul Bettany’s performance in Broken Lines. Like many other critics, I think he’s a knockout as partially paralysed ex-boxer, Chester. Atrophied muscles and a bruised psyche have turned him into a virtual recluse, sustained only by the care of his girlfriend B (Doraly Rosa).

Chester, though, is not the protagonist of Broken Lines, a thoughtful but sombre drama about love and loyalty set in North London. The film begins with 30-something property developer Jake (Dan Fredenburgh) returning to his Jewish roots for his dad’s funeral. Angrily shovelling dirt onto the coffin, he seems animated more by rage than grief. He meets waitress B and initiates a tentative courtship over cigarettes and dodgy chat-up lines – “If this was your last day how would you be spending it?”

The two men vying for B’s affections are both hiding out in their own ways. Jake’s home is now in Kingston-upon-Thames and he’s engaged to teacher Zoe (Olivia Williams). But this happy-ever-after scenario seems far from his mind as he ties up loose ends with his family and (by his own admission) skives off work. He seems as uncomfortable with Zoe’s solidly middle-class family as he does visiting his own mother (played by Harriet Walter).

Jake bitterly compares growing up in Finsbury Park to a prison, but at least he’s free to roam its mean streets and brood in his car. Unknown to B, he watches and sketches her at night from across the street in his father’s tailoring shop. His rival is marooned in front of the TV all day, waiting for news from the outside world. Bettany subtly captures Chester’s torment through small gestures (he keeps dabbing at his corner of his mouth), as well as the awkwardness of a once-powerful frame that now imprisons him.

Broken Lines was co-written by actors Fredenburgh and Rosa, after they workshopped together on another project. Watching the interviews on this DVD it’s clear that they’ve worked hard to pare the script back, so that we’re left to fill in some of the blanks here. The relationship between Chester and B hardly needs dialogue anyway: you can sense the growing tension in their daily routines and enforced domesticity.

Less successful are the brief interludes showing Jake and Zoe’s relationship. Their conversations – including a spat over the MSG content of a Thai takeaway – feel a bit like an afterthought. It’s a thankless role, but Williams does bring a genuine froideur to her sole encounter with B.

On film London is often unrecognisable to those of us who live here – heavy-handed use of CGI and a total disregard for geography don’t help. Director Sallie Aprahamian (EastEnders, The Bill) makes the world of Broken Lines feel both drab and authentic and the street scenes help to balance the claustrophobia of what the writers call B and Chester’s “bubble”.

But despite excellent work from Doraly Rosa, Harriet Walter and Rita Tushingham (as B’s sympathetic aunt), I think Broken Lines would have been a better film if Jake had been a more peripheral character. Bettany is so compelling as the tragic Chester that he feels like the central figure in the story. It’s when he’s on screen that this low-key drama really punches above its weight. 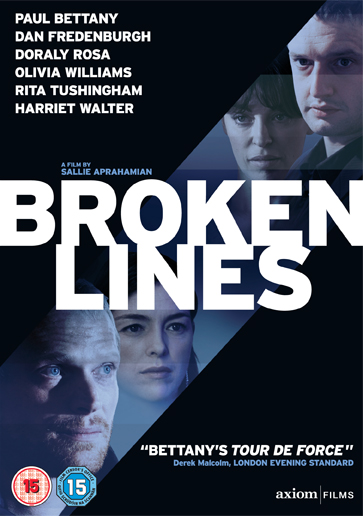