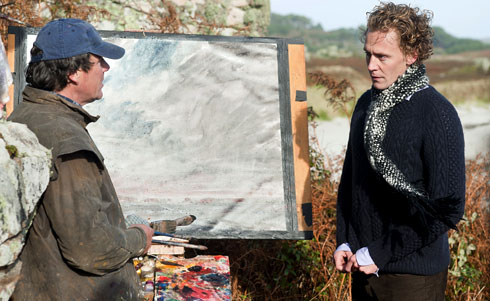 Writer/director Joanna Hogg’s beautifully judged drama, Archipelago, will strike a chord with anyone who has endured a family dinner served with a side order of angst and simmering rage. Her first feature, Unrelated (2007), was set during a Tuscan vacation, and this film takes the middle-class Leighton clan to the picturesque island of Tresco, off the Cornish coast.

Edward (Tom Hiddleston) arrives on the island to join his mother Patricia (Kate Fahy) and older sister Cynthia (Lydia Leonard) for a long goodbye, before embarking on a year’s voluntary work in Africa. Dad William has been delayed, and his absence is felt more keenly with each passing day. As they wait, these pampered folk luxuriate in the deserted beaches and lush vegetation and anticipate the next gourmet offering from cook Rose (Amy Lloyd). Amidst the growing tension, artist Christopher (Christopher Baker) completes the picture of bourgeois indulgence by conducting painting lessons and dispensing fatherly advice.

All of this could have offered possibilities for satire, mystery or perhaps even a new spin on the reality TV genre. Hogg’s genius is to give these characters the time and space in which to breathe. Her approach – working without a conventional script, restricting close-ups and not using any music — makes this fictional material seem less staged than most documentaries. The fact that Christopher and Amy are not played by professional actors gives their interactions with the family members a looser, more improvised feel.

Like much of Mike Leigh’s work, Archipelago is about the pain, embarrassment and sheer frustration engendered by close proximity to your relatives. The conflicts between the siblings feel mundane yet horribly familiar: Cynthia makes a scene in a posh restaurant; Edward expresses resentment at not being allowed to bring his girlfriend on holiday. But whereas Leigh’s characters sometimes set your teeth on edge, Hogg never allows these people to slip into caricature.

There’s an extraordinary conversation between Edward and Rose over a (gently) simmering lobster pot that will send you back to Woody Allen’s Annie Hall. This scene could have been played purely for laughs, but Hiddleston’s understated performance reminds us that Edward’s innate decency and good manners are part of his problem. You wonder how much responsibility William bears for his son’s decision to leave his job and take what Cynthia dismisses as a belated “gap year”.

The leisurely pace of Archipelago and lack of exposition will frustrate some viewers. Hogg’s film places great importance on the painstaking act of painting but it also displays painterly qualities. She explains the lack of close-ups by arguing that she likes to “give the viewer a chance to explore the frame”, rather than just focusing on faces. This is most obvious in the increasingly fraught phone calls between the absent William and his family. Showing the figures of Patricia and Cynthia silhouetted against a view of the bay, speaks volumes about their barely suppressed anger.

I usually regard music as an essential part of the cinematic experience, but I really enjoyed the fact that Archipelago is just a symphony of birdsong, crashing waves and wind. You don’t always need songs or an orchestral score to manipulate your emotions. In culinary terms, you could think of this lovely film as a refreshing palate-cleanser after years of watching over-edited, over-acted and (frankly) overrated Hollywood domestic dramas.