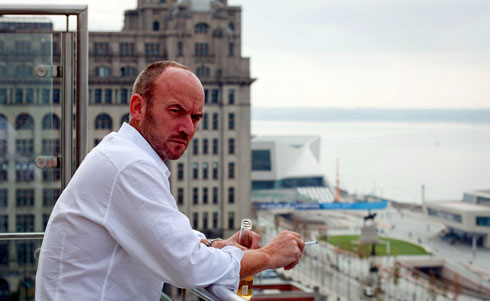 [pullquote align=”full” cite=”” link=”” color=”#1871bf” class=”” size=””]If you like insipid performances and explosive endings, and believe that water-boarding is a legitimate interrogation technique, this might be your kind of thriller.[/pullquote]

If I was in a charitable mood, I would describe Ken Loach’s Route Irish as a film with good intentions, undermined by clumsy execution. But 109 minutes spent watching a increasingly deranged antihero rampaging round Liverpool have left me distinctly low on goodwill. Billed as a conspiracy thriller that offers “a fresh insight into the moral and political corruption at play in Iraq”, Route Irish seems determined to hammer home the message that “violence begets violence”.

It all starts calmly enough, with George Fenton’s lovely score playing over shots of a man enjoying the view of his home city from the Mersey Ferry. Fergus (played by Mark Womack) is mourning the death of his best mate Frankie (played by comedian John Bishop), who has been killed in Iraq. Both men were private security contractors, earning a cool £10,000-a-month (tax free) to police the mean streets of Baghdad. But after the funeral, Fergus angrily rejects the official story about how Frankie died on “Route Irish” — the notoriously dangerous road between Baghdad airport and the Green Zone.

Fergus sets out to expose the lies told by venal security boss Haynes (Jack Fortune), and assuage his own guilt at having lured his mate back to this dirty little war. As with In the Valley of Elah, key evidence of war crimes turns up on a mobile phone and fuels Fergus’s moral crusade. Was this really just a case of “wrong place, wrong time” both for Frankie and the hapless Iraqi family whose shootings he recorded just days before his death?

Like Fergus, I think Route Irish suffers from an overdose of righteous indignation. Like those ubiquitous roadside bombs, it keeps setting off small explosions all over the place. Before you’ve had a chance to react to one outrage there’s yet more collateral damage. If Loach and his regular screenwriter Paul Laverty had stuck to making a character-based drama, this could have been much more compelling. But they would have needed a more focused script, and much stronger performances from Womack and Andrea Lowe, who plays Frankie’s widow, Rachel.

Post Traumatic Stress Syndrome is supposed to explain Fergus’s behaviour here, but it’s hard to generate much sympathy for the ranting, self-pitying monster portrayed by Womack. A tone of hysteria is established early on, when he jemmies open Frankie’s coffin inside the church, and removes the corpse’s tie! From there it’s a relentless descent into bullying, abduction, torture and murder. Lowe’s Rachel might have acted as a counterbalance to these excesses, or at least helped to humanise Fergus during a fumbling love scene. But she seems to have been cast largely for her looks and leaves us with little sense of who Frankie was.

Apart from its total lack of restraint, Route Irish is yet another film that makes the death of one wealthy white man seem far more important than the slaughter of nameless Iraqis. That pattern continues in Liverpool, where an Iraqi called Harem (played by singer Talib Rasool) is more or less bribed into helping Fergus uncover evidence – only to pay a high price. A needlessly protracted scene shows Harem and his family being attacked by Nelson — the thug who may have killed Frankie. No one seems to care, though.

You would expect the film-makers behind My Name is Joe, Bread and Roses and The Wind that Shakes the Barley to rail against social injustices, yet not be afraid to address brutality in all its forms. We should all feel angry about the iniquities of private security firms, who profit from the human misery of war, yet seem to be totally unaccountable. But it’s hard to share Laverty’s outrage at mercenaries being the forgotten casualties in this war. Surely that role falls to the countless innocent Iraqis, who don’t get paid a small fortune before being blown up or gunned down in their own country?

If you like insipid performances and explosive endings, and believe that water-boarding is a legitimate interrogation technique, this might be your kind of thriller. For genuine excitement and bloody vigilante justice, I’d rather watch Liam Neeson in Taken and spare myself the moralising.