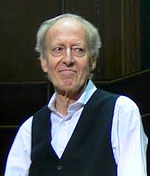 It’s a sad irony that composer John Barry has died in the week that sees the release of a new film adaptation of Brighton Rock. In 2004 a musical version of Graham Greene’s novel was produced at the Almeida Theatre in London, with songs by Barry and lyricist Don Black. The reviews were mixed, with The Guardian’s Michael Billington calling Barry’s score “sugary”. It’s not a word I’d normally associate with a story about sadistic violence, Catholic angst and twisted loyalties — or with the distinctive sound of one of Britain’s finest movie composers.

In those far-off days before DVDs, MP3s or YouTube I used to tune in to LWT on Sunday afternoons, hoping to catch the beginning of The Persuaders!, with Roger Moore and Tony Curtis. To be honest, I wasn’t that interested in the antics of those middle-aged playboys. It was the opening credits sequence I wanted to see — sepia-tinted footage that juxtaposed the wildly contrasting upbringings of the old Harrovian and the tenement kid. Best of all was Barry’s unforgettable Moog synthesiser theme music, a sound that encapsulates the early 70s for me in the same way Bill Conti’s Dynasty theme does for the decade of shoulder pads and lip gloss.

Most James Bond fans will know that Barry was the creative force behind 11 of the 007 movies, including Goldfinger, You Only Live Twice and (my favourite) On Her Majesty’s Secret Service. It’s a shame that in later years Barry was mired in a controversy over whether he — rather than Monty Norman — had composed the theme for the first Bond movie, Dr. No. (Barry is not credited at all on that film.) Whatever the truth, it is Barry’s name that remains most closely associated with the golden years of the franchise.

Barry’s long career wasn’t just about providing the right combination of brassiness and seductive strings around which Shirley Bassey could wrap her extraordinary tonsils. A quick glimpse at IMDb reveals that he worked on more than 100 films and TV shows, including composing the theme for the BBC’s Juke Box Jury and appearing on a show called Drumbeat with his band, The John Barry Seven.

Appropriately, for a man whose music encapsulates the best of the 60s, Barry’s third wife, Jane Birkin, was one of the icons of that decade. He won five Oscars, including two for Born Free, though I can’t say that the tedious Dances with Wolves or the risible Out of Africa are films that encapsulate the best of Barry. Isn’t that always the way with awards?

In his sleeve notes for “The Best of John Barry Themeology” CD, fan boy Jonathan Ross wrote: “The man’s a god. If he were French then they’d name a park after him and cover him in medallions.” Even allowing for the usual Ross hyperbole, the man does have a point. A paltry OBE seems like a very poor reward for the man who wrote the music for “We Have All the Time in the World”. After all, Mick Jagger has a knighthood!

Great film music should complement the action rather than drown it out — something Alexandre Desplat has so far failed to grasp. It should stand up on its own and yet remain inextricably linked with the images it describes. Here are my five selections for the Best of Barry.

On Her Majesty’s Secret Service theme