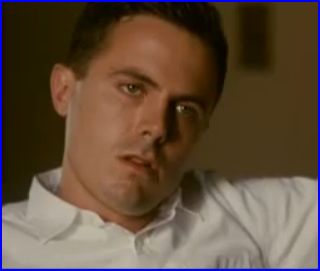 Casey Affleck is a big hit with the ladies

“Out here you’re a man and a gentleman or you aren’t anything at all.” Or you could be a smooth-talking lawman by day and a psychopath with a penchant for kinky sex by night. Welcome then to The Killer Inside Me and the twisted world of author Jim Thompson, the “dimestore Dostoevsky” with a distaste for happy endings.

Michael Winterbottom’s adaptation of Thompson’s 1952 novel is proving so controversial that it seems to have spawned its own microsite within The Guardian’s film section. But all the blogging and moralising about screen violence and misogyny has left me feeling, like the story’s protagonist, “split right down the middle”. Should I join in the widespread condemnation or admit that I don’t understand why this film has generated quite so much debate?

Of course Winterbottom (9 Songs, The Road to Guantanamo) is no stranger to controversy, while Thompson’s brand of hard-boiled fiction isn’t for the faint-hearted. So this project was pretty much guaranteed to upset someone. This is a genre in which women tend to be duplicitous whores or victims — not happy home-makers. But I’m more interested in whether this is a piece of neo-noir that stands comparison with Stephen Frears’s 1990 adaptation of Thompson’s The Grifters, a tense, well-plotted tale of greed, deception and broken dreams.

Be warned: this is a story in which lusty Lou’s belt is enthusiastically employed in a variety of recreational activities.

The colourful, retro-style opening credits, jaunty soundtrack and seemingly banal narration, initially offer no hint that clean-cut deputy sheriff Lou Ford (Casey Affleck) is anything other than a nice guy. But a routine assignment to run prostitute Joyce Lakeland (Jessica Alba) out of his small West Texas town soon turns ugly. She gets annoyed and slaps him around a bit, so he responds with the brutality that is, we realise, his modus operandi. Even more disturbing is the fact that she enjoys it. Be warned: this is a story in which lusty Lou’s belt is enthusiastically employed in a variety of recreational activities.

The best crime stories often centre around over-elaborate plots, with framing devices and flashbacks that both elucidate and confuse. But when the narrator is clearly deranged, it is even harder to make sense of what you are seeing and hearing. After some preamble with union boss Joe Rothman (Elias Koteas), Lou gets involved with property developer Chester Conway (Ned Beatty), who may have been responsible for his brother’s death. But a routine pay-off scheme to get Chester’s son Elmer away from Joyce ends in a bloodbath. Lou doesn’t just double-cross Joyce and shatter her dreams of a happy future, he absolutely pulverises her.

The much-debated scene in which Lou pulls on his gloves and mercilessly batters Joyce is like watching the most graphic boxing bout ever filmed. But this isn’t Raging Bull: there’s no sanitising black and white or artfully desaturated photography to lessen the impact of what is happening. Winterbottom pulls no punches in his decision to show the full horror of Lou’s brutality. But as the camera lingers on Jessica Alba’s bloody and mutilated face you have to ask whether the director really needed to take his interpretation of pulp fiction quite so literally.

After a sucker punch like that what can the film do to maintain interest, sympathy or suspense? The best noir tales require a moral or intellectual counterbalance to the villain’s cunning, to create tension – think of Edward G Robinson’s conscientious Barton Keyes in Double Indemnity. But here all our information is filtered through the killer’s increasingly warped perception, with the result that the other characters seem rather peripheral. I’m not sure how doggedly the investigating DA Hendricks (a miscast Simon Baker) is pursuing the man he thinks may have shot Elmer and left Joyce (for now) in a coma. Seen through the eyes of Affleck’s cocky psychopath, neither Hendricks nor the upstanding sheriff Bob Maples (Tom Bower) looks capable of solving these brutal crimes.

Winterbottom and his regular cinematographer Marcel Zyskind are more successful in evoking an atmosphere of danger, ambiguity and doomed romanticism around the women in Lou’s life. Jessica Alba is both feisty and seductive in a role that doesn’t give her much to work with. A brunette Kate Hudson initially brings much-needed normality to her part as Lou’s loving but exasperated girlfriend, Amy. But the gloating voiceover confirms what we see all too clearly, that her role is to submit willingly to the same kind of punishment that Joyce enjoyed. Amy’s eventual downfall gives the film its second ruthlessly choreographed moment of horror.

The Killer Inside Me stands or falls on the strength of Affleck’s performance and his ability to convey the torment of a man who, we learn in flashbacks, has been abused as a child. He moves seamlessly from “downhome” observations on small-town life, to sneering at his accusers and then lashing out with his face contorted with rage. It’s a compelling performance but, for me, it lacks the element of pure menace that made the late Dennis Hopper’s Frank Booth the real star of Blue Velvet.

This film contains less than 10 minutes of explicit violence, within a deliberately ambiguous storyline that builds to a truly incendiary climax. It’s glossy and mostly well-acted but nowhere near as absorbing as the best crime dramas like Chinatown and LA Confidential, nor is it as horrific as Henry: Portrait of a Serial Killer. Like the protagonist, it tries hard to punch above its weight but has difficulty landing the killer blow.