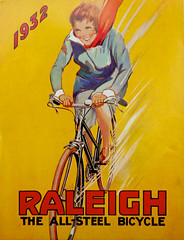 “Whoever invented the bicycle deserves the thanks of humanity.”

Perhaps if Lord Charles Beresford (1846-1919) had been forced to navigate the overcrowded pavements of 21st-century London instead of patrolling the high seas he would kept this oft-quoted nonsense to himself. As John McEnroe once succinctly put it, “You cannot be serious.”

Now the wheel, of course, was a really great idea. I give thanks to the nameless Sumerians or Mesopotamians responsible for that particular “light bulb moment”. But if I am ever forced to prostrate myself before the Great God of Inventions, I think telephones, chocolate and the flushing toilet will be rather higher up my list than the accursed bicycle.

Cycling is a subject that polarises opinion. On one side we have the British government’s tax-busting Cycle to Work scheme and Beresford’s spiritual descendants joyously spreading the word that “Cycling is fun, fast, green and healthy”. In the opposite camp are the massed ranks of motorists and pedestrians who’d be happy never to clap eyes on another lycra-wearing, pannier-toting, cycling evangelist ever again.

I must admit that I’m a pedestrian and fully-fledged velophobe. I’m not prepared to go quite as far as The Times columnist Matthew Parris did with his call for litterbug bike riders to be decapitated. But I’m definitely right behind him when he asks: “Does cycling turn you into an insolent jerk? Or are insolent jerks drawn disproportionately to cycling?”

In the middle-class suburb of west London where I live, a weekend shopping trip involves running the gamut of clipboard-wielding charity workers, newsreaders and buggy-pushing “yummy mummies” with their scooter-riding offspring in tow. Add into the mix the increasing number of riders who feel it is their God- or perhaps government-given right to invade pedestrian space with their bikes and their bad attitude and you have a problem.

I have lost count of the number of angry encounters I have had with riders both male and female, of all ages, races and social classes when they squeeze past me with millimetres to spare, or come at me head on with a look that says “Get the hell out of my way!” The flashpoint tends to be my assertion that they have no right to be there. As the Department for Transport website helpfully reiterates: Cycling on the footway (pavement) is an offence under Section 72 of the Highways Act 1835 as amended by Section 85 (1) of the Local Government Act 1888.

But not only are cyclists repeatedly intruding into areas where they shouldn’t be, they can’t even be civil about it. In my experience, any attempt to challenge the right of the two-wheeled menace to invade the pavement will be met with a volley of abuse or blank incomprehension. I have yet to encounter a single offender willing to apologise for being where he/she should not have been.

Recently I’ve grown bored with this one-sided argument. I tend to stand aside and give way to encroaching cyclists rather than risk a situation where I might be driven to punch one of them. But a recent incident in which both my parents were mowed down by a speeding bike rider outside their home has reminded me that I’m not the one most at risk from their antisocial antics. No, it is small children, the elderly and those with impaired hearing who are most likely to get in the way of approaching bicycles. And iPod users beware: pedestrians with headphones welded to their ears are just waiting to be mowed down.

Now I know that motorists and cyclists have their own life and death issues to deal with, judging by some of the posts on the Raging Bike website. But that’s something for our politicians and law-enforcers to deal with. I’m just heartily sick of being caught in the crossfire between aggressive motorists and rude cyclists. The fact that cyclists feel, perhaps justifiably, victimised by motorists does not give them the right to make the pavements hazardous for pedestrians.

Perhaps those cyclists who feel the need to flout the law should remember that they, too, are pedestrians. We don’t all own cars or bikes but every able-bodied citizen has to walk sometimes – even if it’s just those few yards between their vehicle and the front door.

In her 2002 novel The Red and the Green, Iris Murdoch dubbed the bicycle “the most civilised conveyance known to man” . It seems to me that some of its newest devotees – flushed with their “green” credentials – need a reminder about the old-fashioned virtues of humility and good manners.

(Article first published as Hell on Wheels on Blogcritics.)