The Brexit debate is a tissue of lies 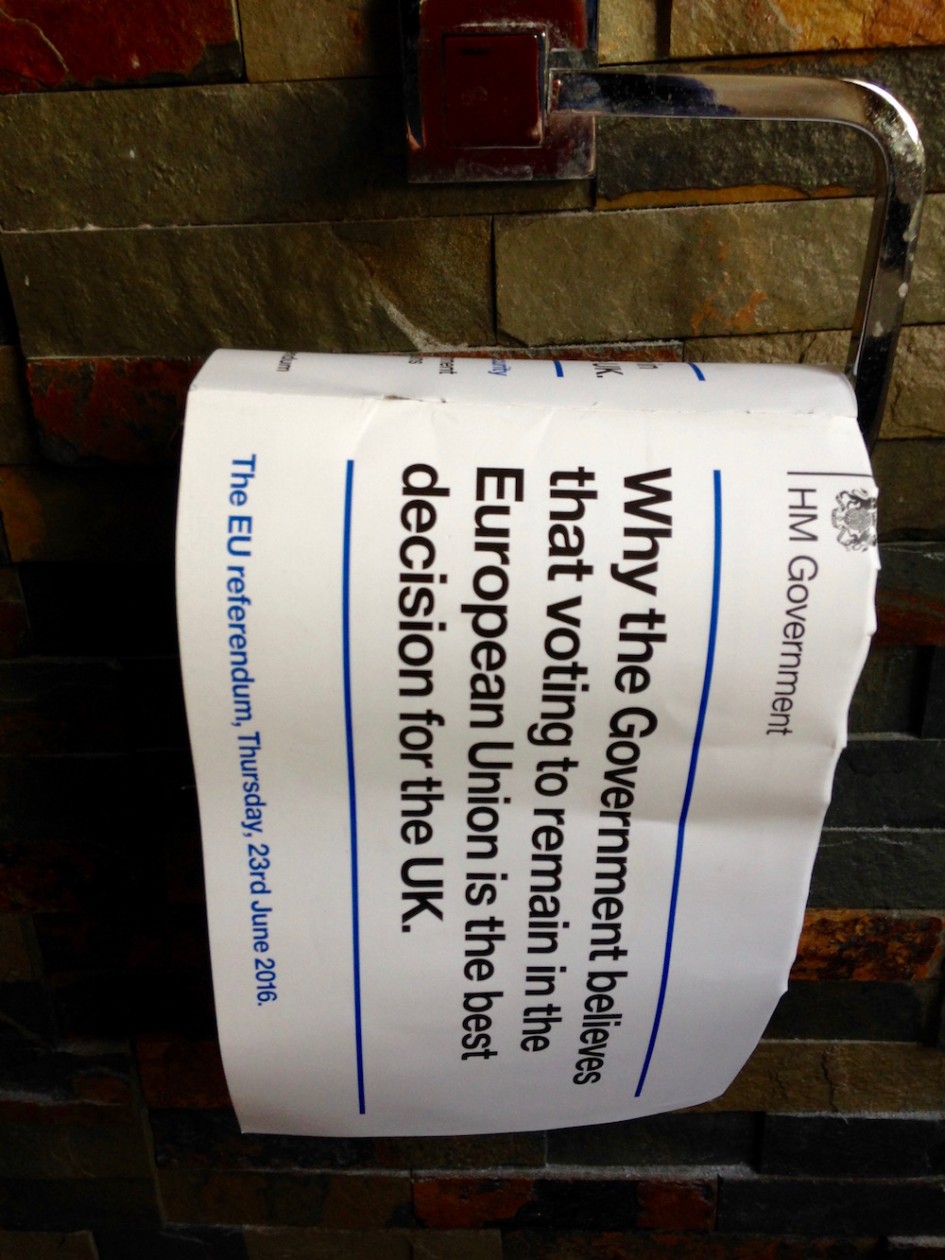 It’s taken me a few weeks, but I’ve finally found the perfect use for the Government’s much criticised EU referendum leaflet. As you can see, I’ve upcycled it into this very attractive Brexit loo roll.

Of course the Brexit roll wouldn’t be fit for purpose because it’s the wrong sort of paper. No doubt there is a raft of EU regulations concerning the weight, volume, whiteness and opacity of British loo paper that would preclude my upcycled roll ever finding its way into your bathroom.

But no matter what the bureaucrats and politicians say, I have no doubt that this patronising and expensively produced tissue of lies deserves to be flushed down the bog.

The EU referendum will take place on Thursday 23 June and it has all the ingredients of a gripping TV drama. Britain’s decision whether to remain in the EU or leave will have far-reaching consequences for decades to come – or so the “experts” keep telling us.

This is not like a General Election, where if we vote in the “wrong” party they only have a maximum of five years to destroy the country. It worries me that we are entrusting such an important decision to the same numbskulls in the British electorate who voted in a Conservative majority Government in 2015. That’s democracy for you.

Depending on which biased news source you believe, the Brexit referendum is still on a knife-edge, with up to 20 per cent of voters still undecided. This must be worrying for David Cam-moron and his cohorts in the Remain campaign, who have predicted a modern version of the Ten Biblical Plagues if we leave the EU. It won’t be lice, locusts and frogs hitting our benighted island, but more familiar woes like higher taxes and interest rates and fewer cheap flights to the Costa del Sol.

In the absence of facts, the EU referendum has had to rely on opinions delivered by a dazzling range of VIPs. Everyone from President Barack “Back of the Queue” Obama to Bank of England governor Mark Carney and the IMF’s Christine Lagarde has warned of an impending recession, international isolation and incalculable damage to British business if we leave the EU. Typically, Donald “I have no preference” Trump seems less enthusiastic about the “very, very bureaucratic” EU.

But despite the quality of the celebrities, the incredibly high stakes and the uncertainty of the outcome, the Brexit Show is proving to be a huge bore. With few hard facts to bolster their flimsy arguments, both sides appear relentlessly negative, repetitive and self-interested.

Despite his Hitler and Obama gaffes, Boris Johnson has contributed the best Brexit campaign soundbites so far. Calling David Cameron’s much vaunted EU deal the “biggest stitch-up since the Bayeux Tapestry” could have come straight out of Carry On 1066.

But Boris is deluded if he believes the Remain and Leave campaigns are engaged in a David and Goliath struggle. The two sides in the EU referendum debate seem more like Lilliputians playing with pea-shooters in a school playground than statesmen, intellectuals or serious politicians.

Whichever side you support, please vote on 23 June.