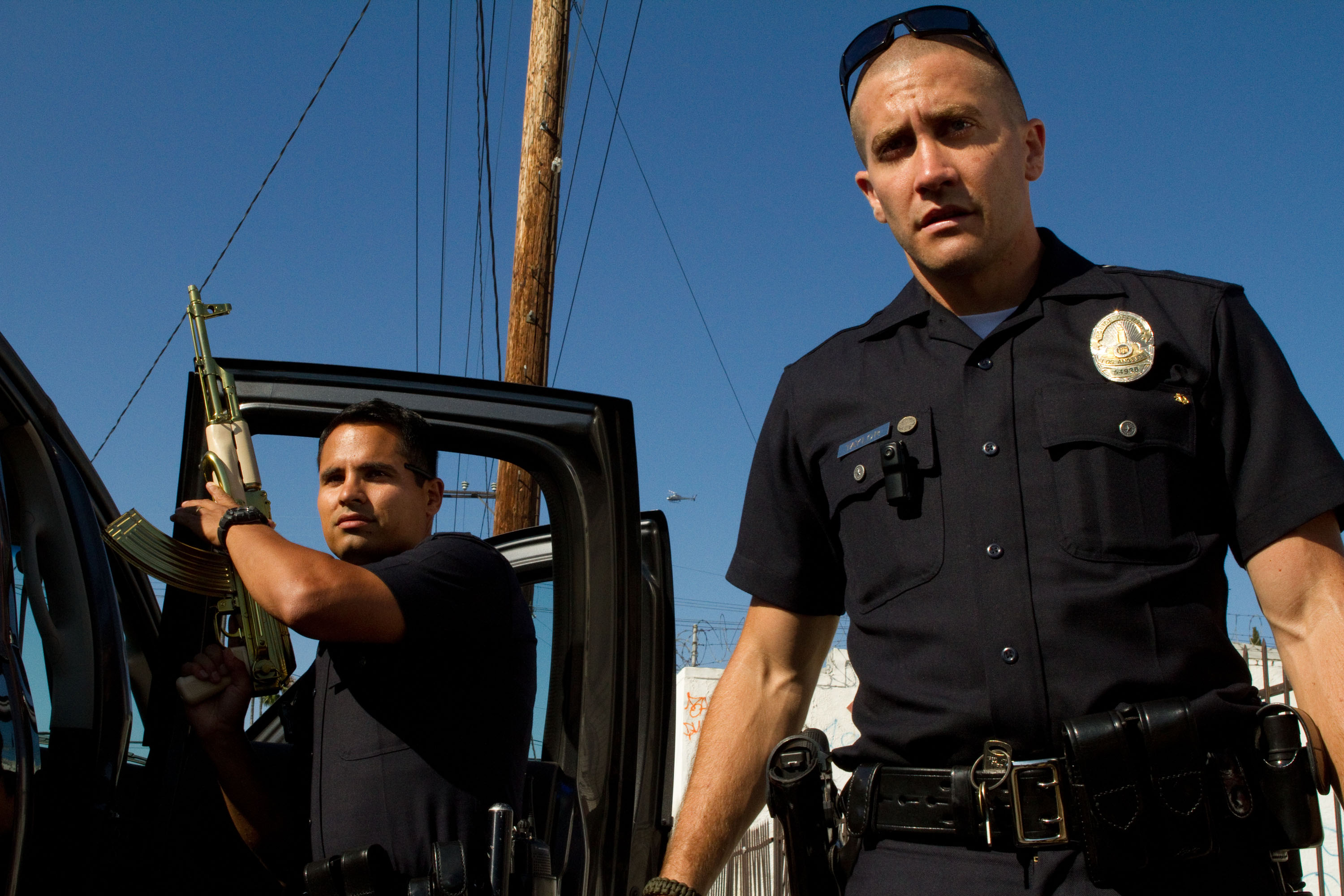 “Once upon a time in South Central . . .” Opening with police sirens, screeching tyres and the first of innumerable F-words, the aural landscape of David Ayer’s End of Watch seems very familiar. This LA-set police drama is not a radical reworking of the genre, but it does provide some new angles on a career in law enforcement. That’s partly because the “found footage” style of camera work allows the audience to walk (and run) in the footsteps of two very likeable LAPD officers.

Officer Brian Taylor (a shaven-headed, bulked-up Jake Gyllenhaal) and his Mexican-American partner Mike Zavala (Michael Peña) work out of Newton Division. Brian is studying film-making (as part of a Pre-Law course), so he’s constantly recording and commentating both during and after their shifts. Inside the patrol car it’s all banter and male bonding, as these buddies riff about their women – “Dude are you gonna hook up with a Mexican girl?” – and their aspirations. Outside, they save two kids from their crack-addicted parents, tackle a huge blaze and get into an impromptu fight with the angry “Mr Tre”.

For about half an hour, End of Watch reminded me of TV’s Southland, with its hand-held filming, dry humour and emphasis on routine crimes. But there is more going on here than ride-alongs and Brian’s budding romance with the perky Janet (played by Anna Kendrick). The opening scene shows our gung-ho heroes in a high-speed pursuit that ends with two men dead. That same fearless approach informs their later discovery of a house of horrors that is linked to drugs, people trafficking and a Mexican cartel. Warned that there is a hit out on them, a smiling Brian points out that everyone wants to kill them. Soon complacency gives way to panic in the bravura, all-guns-blazing, blood-soaked climax. 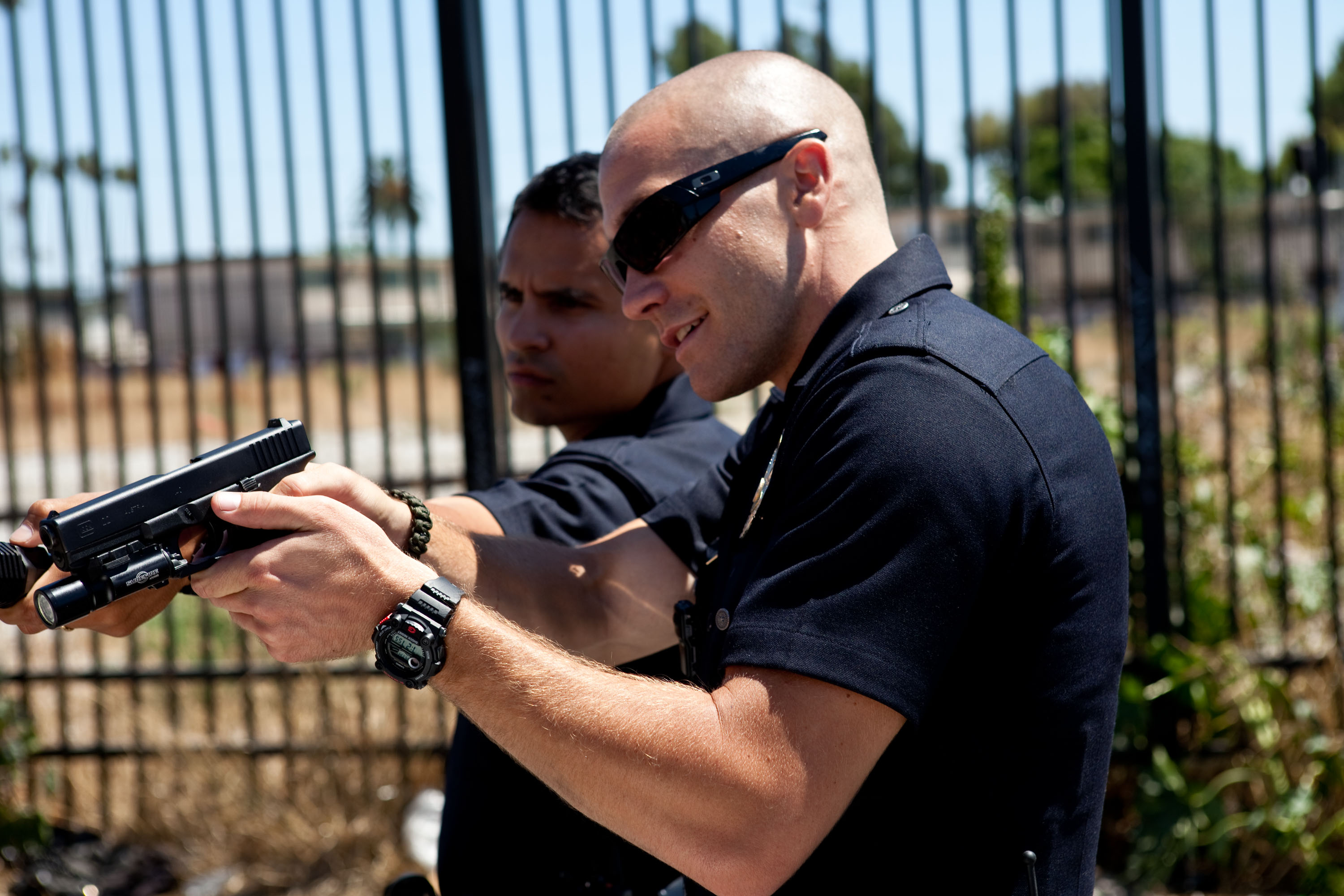 Writer-director Ayer’s previous films include Training Day, Dark Blue and Street Kings, so he’s certainly on familiar ground with the LAPD. The actors had several months of preparation for their roles and it has paid off – the Taylor-Zavala partnership is the linchpin of the movie. The softly spoken Gyllenhaal brings more self-confidence and physical presence than you might expect to his part as an ambitious young officer. Equally watchable is Peña, who wrings every ounce of humour out of Ayer’s droll script. David Harbour relishes his lines as veteran cop Van Hauser, the duo’s main antagonist: “Bad guys attack from the front. Department comes in from the rear.”

After Brian’s opening voice-over – “I am fate with a badge and gun” – I was worried that there would be excessive mythologizing of the LAPD here. Ayer’s film is certainly a long way from the LA of The Shield, where corruption and brutality are the only effective way to tackle crime. But I found it refreshing to have two heroes who aren’t weighed down by cynicism and tormented by inner demons.

With strong performances, a sharp script and some full-on action sequences, End of Watch is an entertaining ride. Its weak point is a narrow focus that never gives us much background on the cartel or its impact on the community. This is about the survival of two cops, rather than an examination of organised crime or the shifting demographics of 21st-century LA. So the local Mexican “enforcers” who eventually come after Taylor and Zavala prove to be annoying, incompetent and foul-mouthed, to the point where I wanted to mute them. The incessant use of the same expletive may be realistic, but it doesn’t make for compelling viewing. 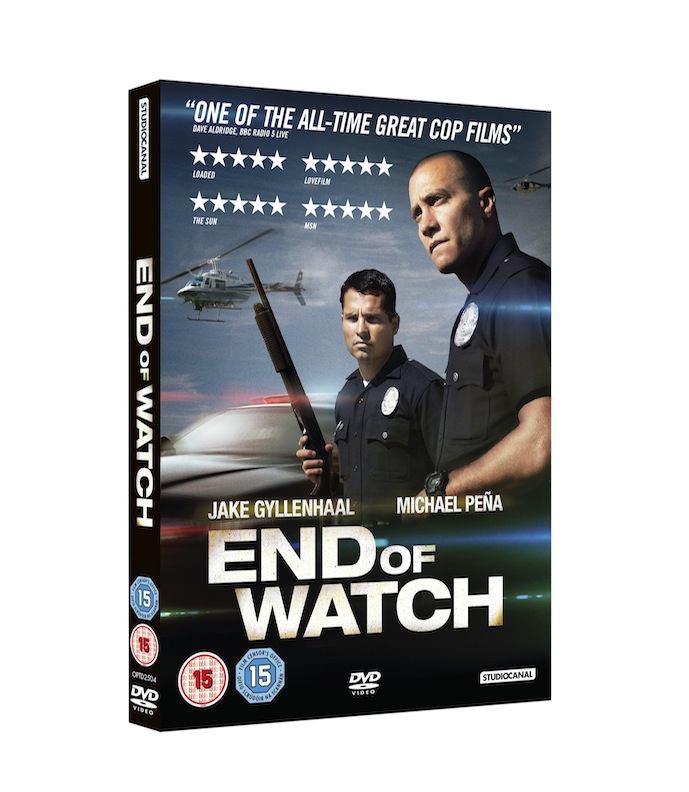