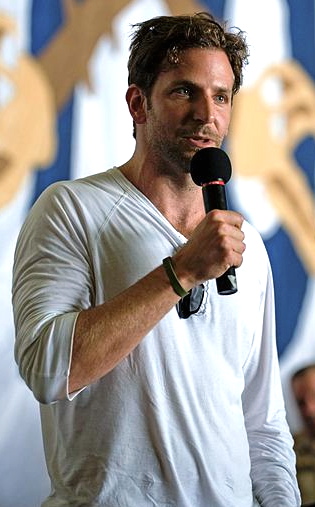 If the definition of a real movie star is that he looks good wearing a plastic bin bag, then Bradley Cooper has definitely made the transition from A Team to A-list. After watching Silver Linings Playbook, it’s also pretty clear that Cooper and co-star Jennifer Lawrence have the upper hand over the more tabloid-friendly Brad ‘n’ Jen (former lovebirds Brad Pitt and Jennifer Aniston). Hollywood may be increasingly driven by a tiresome addiction to sequels and CGI, but David O Russell’s romantic comedy drama proves there is still room for some old-fashioned screen chemistry: the new Brad ‘n’ Jen have that in spades.

I remember Cooper from his days playing the tonsorially challenged newshound Will Tippin in Alias, but these days he’s best known for starring in The Hangover and its sequel(s). In Silver Linings Playbook his character, Pat Solitano, is still feeling the effects of what you might call a monumental matrimonial hangover. He’s just spent several months in a Baltimore mental institution after attacking his wife’s lover. It’s one thing to catch your cheating spouse in flagrante delicto, but what really pushes Pat’s buttons is the wilful misappropriation of his wedding song, “My Cherie Amour”, as the score to this illicit nooky. Back home in Philadelphia with his mum (Jacki Weaver) and dad (Robert De Niro), the bipolar Pat juggles therapy sessions and self-help mantras with a rigorous course of intellectual and physical self-improvement. It’s all designed to win back his ex-wife Nikki, though it sounds as though their marriage was far from idyllic.

I’ve read at least one review that claims Silver Linings Playbook uses up its best material in the opening 20 minutes. It’s true that watching Pat trying to reintegrate himself into the family home and the neighbourhood, makes for an engaging start. Between a meltdown at the shrink’s office and a late-night (or very early morning) hissy fit about the literary shortcomings of Ernest Hemingway, Pat’s behaviour is predictable mainly for its unpredictability. But when Lawrence finally appears, it’s as though the missing piece in this cinematic jigsaw has fallen into place. She plays young widow Tiffany, who reacted to the loss of her husband by embarking on a series of office-based sexcapades with male and female colleagues. An awkward friendship with Pat, based around jogging sessions and frequent verbal sparring, eventually blossoms into something more romantic.

Lawrence, who’s still only 22, has already proved that she has the combination of intelligence, physical presence and sex appeal to carry blockbusters like The Hunger Games, as well as brooding indie dramas like Winter’s Bone and The Burning Plain. In terms of classic cinema, you could say that she allies the ballsiness of Barbara Stanwyck with the sultriness of Lauren Bacall, in her scenes here with Cooper. At the beginning, Pat appears the more needy and deluded of the pair — driven by his pursuit of the faithless Nikki. But though she’s been branded a floozy, Tiffany has much more to lose if she falls for a man who’s still in love with his wife.

At heart, Silver Linings Playbook is a mashup of old-fashioned romantic comedy with elements of the “mental illness” genre. So en route to the feel-good ending you know some emotional baggage will be unpacked, and Pat’s difficult relationship with his dad will be explored. Initially I was worried that De Niro would make his superstitious, gambling-obsessed Philadelphia Eagles fan into a Fockers-style caricature dad. Fortunately he doesn’t. But the football subplot is by far the least interesting aspect of the film and contributes to the protracted running time.

Silver Linings Playbook has its faults — not least a fondness for wobbly camera-work that leaves you feeling as off-balance as Pat and Tiffany. But Cooper does enough here to suggest that those Paul Newman comparisons aren’t totally fanciful. It might just boil down to a choice of Jennifers, so he should probably steer well clear of vacuous fare featuring the former Mrs Pitt. I’m really looking forward to seeing Cooper and Lawrence team up again in Susanne Bier’s Serena.