Standing Up for James 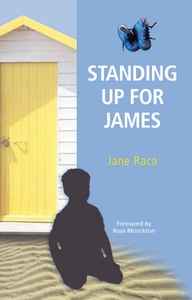 I try not to use this blog for promotional purposes, but I’m making an exception in the case of Standing Up for James, a memoir written by Jane Raca. It’s the story of her second son, James, who was born 15 weeks prematurely in August 1999. Though he weighed just 1lb 12oz at birth, this tiny boy did survive — thanks to expert medical and nursing care and the love of his family. That was just the beginning of their ordeal, because James had severe brain damage and was eventually diagnosed as epileptic and severely autistic. Jane’s book is about coping with these devastating disabilities, while raising two other children and battling with her local authority for funding and help. At times the enormity of this challenge overwhelmed her.

If my preceding paragraph has made you dismiss Standing Up for James as too depressing or not relevant to you, think again. Even if you’re not directly affected by physical, mental or developmental disability, the chances are that you know someone who is. Many people in the UK will be all too familiar with the day-to-day frustrations of trying to get help, or even a straight answer, from what can seem like a “don’t care” system.

I’m not going to review Standing Up for James here, or even tell you what life has turned out like for James, who celebrated his 13th birthday a couple of months ago. That’s partly because there are critics, charity workers and professionals who work within the field of disability who are far better qualified to review this book than I am. Those experts include Rosa Monckton, President of KIDS, who contributed the heartfelt Foreword to Standing Up for James.

The main reason I’m not reinventing myself here as a literary critic is that Jane is a friend and I was her editor on this project. We were fellow law students at Bristol University in the 80s, but we had been out of touch for several years when Jane emailed me in February, saying “I have written a book and could do with a bit of advice about publishing”. I’m sure there’s an unwritten law that says friendship and a rigorous editing process don’t mix well. But after reading a few sample chapters (not even in the correct sequence) I knew this was something I wanted to get involved with.

It turns out that editing a book is a much better way to get to know someone again than heading off to the pub for a lengthy session. It’s an intellectual, literary and emotional journey, which requires tact on both sides and a willingness to listen. Jane’s decision to self-publish Standing Up for James meant that we found ourselves debating everything from the finer points of punctuation and grammar, to what to put on the cover. The final decisions were hers, of course.

I would like to claim credit for contributing the first line of the back cover blurb: “How far would you go to stand up for your child?” In Jane’s case the answer is that you put all your resources – legal, financial, maternal – into supporting your own son, and then write a book in the hope that it will help someone else’s child.

Standing Up for James costs £8.99 and is published by Clarendon Publications. For details of how to order a print copy or the e-book, see Jane’s website: www.standingupforjames.co.uk