The Monk: Mad, Bad and Dangerous to Know

Dominik Moll’s The Monk is so redolent with Gothic gloom, overweening piety and suppressed lust that it’s almost in danger of self-combusting. It’s held together by a towering performance from Vincent Cassel, who played Natalie Portman’s tyrannical mentor in Black Swan, and seems to exude menace here without even trying.

From the moment a baby is left to be pecked by crows outside a Capuchin monastery in 17th-century Spain, you know we’re in very dark territory. Despite an ominous birthmark on his shoulder, the unfortunate boy is taken in and raised by the monks. Ambrosio (Cassel) grows up to be a man of unimpeachable virtue and religious zeal, and a beacon of hope for worshippers like the beautiful young Antonia (Joséphine Japy). But things start to unravel when Ambrosio ignores the misgivings of his brothers and allows a masked and supposedly disfigured young novice into the community.

I hadn’t even heard of Matthew Lewis’s 1796 novel before I saw this film. It seems that Moll (Lemming, Harry, He’s Here to Help) and co-writer Anne-Louise Trividi had a mammoth task on their hands trying to condense all the characters and subplots into a coherent 100-minute package. So while Moll keeps the action moving along here, there are times when you can’t see how the various strands will fit together.

A storyline involving a pregnant nun reveals the utter ruthlessness of both the abbess (Geraldine Chaplin) and Ambrosio. The wholesome romance between sweet, virginal Antonia and the lovestruck Lorenzo (Frédéric Noaille) is conducted in sunlit exteriors that provide a visual counterpoint to the decaying atmosphere of the monastery.

I won’t reveal the identity of the actor playing the mask-wearing Valerio, but if you’re familiar with the cast list you may well figure out the secret by process of elimination. Valerio is the key to Ambrosio’s transition from a man of God to an instrument of the Devil. Perhaps the monk was always fated to do evil because of the circumstances of his birth.

You can read a certain ambivalence in the very first scene in which he listens to the shocking sexual misdeeds of one of his penitents. But the forces of darkness that seem to leach from every one of those hideous gargoyles, finally coalesce in the slight figure of Valerio. The feverish, dream-like scenes in which Ambrosio is first poisoned and then seduced, are among the most disturbing in the film.

There’s little in the way of explicit violence or sex in The Monk — until the final scenes. But by then Ambrosio’s physical and psychological torments have been so exhaustively chronicled that you fear the worst. Blinding headaches and recurring visions of a woman in red are bad enough, but Moll drives his point home a bit too forcefully with the lurid scene in which Ambrosio bangs a crown of thorns into his own head.

Luis Buñuel planned to direct a version of The Monk back in the 60s. (He abandoned it to make Belle de Jour, but his screenplay with Jean-Claude Carrière was used for Adonis Kyrou’s 1972 film.) Given his extraordinary track record of combining anti-Catholic themes with elements of surrealism I’m sorry we never got to see Buñuel’s version. I suspect there would have been a streak of dark humour that is lacking in Moll’s film.

The Monk is beautifully shot by Patrick Blossier and well acted — particularly by Cassel and Déborah François. It’s probably best enjoyed if you immerse yourself in all the bells, smells and candles and don’t worry too much about who’s winning the eternal battle between good and evil.

Christopher Lee is Rasputin “History’s Man of Mystery” in Rasputin: the Mad Monk 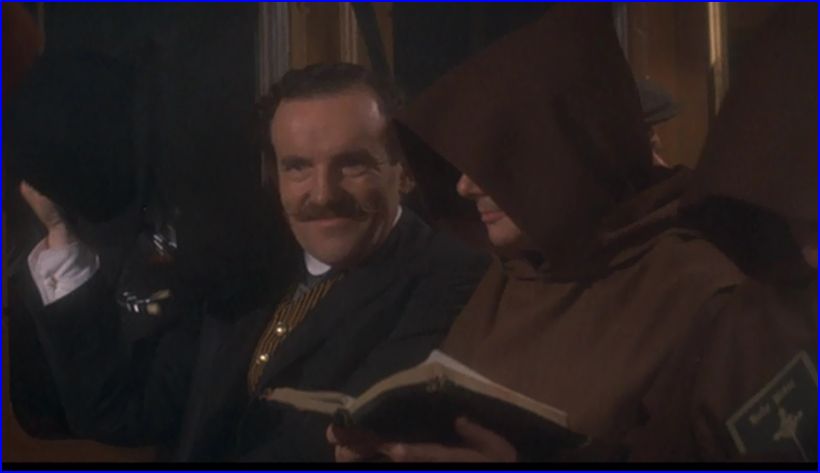 The Monk / Le Moine is on limited release in UK cinemas from Friday 27 April.