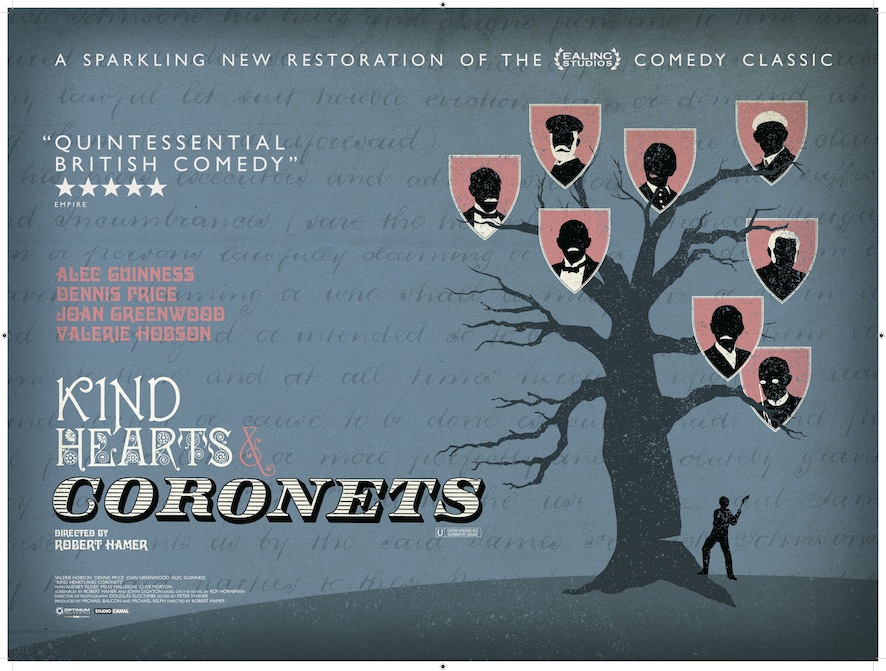 If you’ve never seen Kind Hearts and Coronets, I feel a little envious. I’m not so resentful that, like the film’s antihero Louis Mazzini, I’d actually go out and commit multiple murders. But first-time viewers are definitely in for a treat this year, with the UK cinematic re-release on 19 August and a new DVD and Blu-ray edition to follow on 5 September.

The phrase “blackly comic” has been done to death by unimaginative critics. Too often these days it seems to be synonymous with bad taste, a fistful of “F” words and a total lack of restraint. But Robert Hamer’s film, originally released by Ealing Studios in 1949, is a reminder that dastardly behaviour can take place in the most genteel of surroundings, without so much as a hint of blood.

Set in Edwardian London, Hamer’s film has convicted murderer Louis Mazzini (Dennis Price) recording his life and crimes, as he awaits execution the following morning. As his final hours tick away, we learn how this son of an aristocratic mother and an Italian opera singer plotted to bump off eight members of the snobby D’Ascoyne dynasty (all played by the great Alec Guinness). Along the way he romances the scheming Sibella Holland (Joan Greenwood) and the considerably more ladylike Edith D’Ascoyne (Valerie Hobson).

For me, narration in films and TV is always a risky business. My aversion probably began with Jeremy Irons’s Charles Ryder drawling his way through more than 12 hours of upper-class drama in Brideshead Revisited. Louis, though, invariably has something witty and insightful to say as he cuts a swath through the upper-class twits who stand between him and the dukedom he believes is his birthright. He’s even given to polite expressions of regret about the collateral damage from his murderous campaign. The female companion of his first victim — drowned in a boating “accident” — had “already undergone a fate worse than death” during the Edwardian equivalent of a dirty weekend by the Thames.

Writers like to serve up multiple murders conceived around some kind of literary pattern — the more baroque and fantastical the better. Douglas Hickox’s Theatre of Blood (1973) is a lot of fun, but Vincent Price’s Shakespearean-themed reign of terror does pall by the end. In Kind Hearts and Coronets Louis is ingenious and sometimes lucky in the way he manages to dispose of his relatives, but the screenplay by Hamer and John Dighton never dwells on ugliness of it all. In Price’s well-judged portrayal, the softly spoken Louis is a social climber and a cad but he’s not a sadist. Ironically, it’s his infatuation with the husky-voiced Sibella that proves to be his undoing.

No digital manipulation is necessary to appreciate the brilliance of Alec Guinness or the underrated Dennis Price.

Everything about this film screams elegance and understatement — from those lace-fringed opening titles, to the sound of Mozart’s Don Giovanni on the soundtrack. Those qualities are evident in all the encounters between Louis and his doomed relatives. Each of these brief episodes demonstrates virtuoso skills of Alec Guinness, who’s equally convincing playing a middle-aged suffragette, a mild-mannered photography enthusiast or an insufferably boring parson. The settings are all quintessentially English.

There’s something almost poetic about the demise of the formidable Lady Agatha, whose hot air balloon is neatly punctured by Louis during her moment of triumph: “I shot an arrow in the air. She fell to earth in Berkeley Square.” But my favourite moment is the death of the likeable young Henry D’Ascoyne. As Louis and Edith sip tea on the lawn and discuss Henry’s future, a plume of smoke in the background signals that he’s just been blown to smithereens in his potting shed.

This restored version of the movie will highlight the crisp black and white photography of veteran Douglas Slocombe. But no digital manipulation is necessary to appreciate the brilliance of Alec Guinness or the underrated Dennis Price, who struggled to find decent roles after the early 60s. A profile of Price is included on the DVD, which also features a commentary by Guardian film critic Peter Bradshaw, director Terence Davies and Guinness’s son, Matthew. The fabulous new poster design (top) is by Sam Ashby, who is also responsible for the rebranding of Ealing classics Whisky Galore!, Went the Day Well? and The Lavender Hill Mob.

This may be remembered as the summer of Bridesmaids and Horrible Bosses, but I’m pretty sure no one will be lauding them as five-star classics 60 years from now.