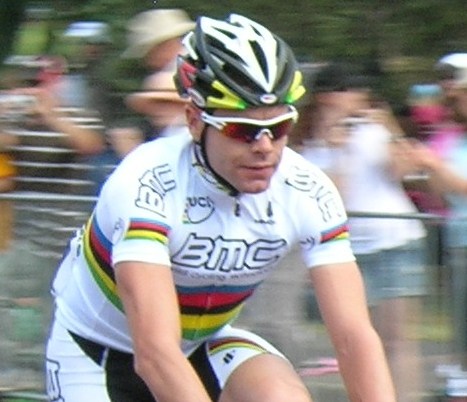 Alberto Contador belatedly attempted to reignite his defence of the Tour de France by punching an aggressive heckler on the Alpe d’Huez. But 24 hours later, his great rival Andy Schleck took the real body blow when the race was snatched away from him – this time by Cadel Evans. Schleck the Younger, entered Saturday’s time trial in Grenoble with a slim 57-second advantage over the Aussie. But with less than half of the 45km course completed it was clear that the yellow jersey was heading Down Under for the first time.

Just over a week ago, a Guardian headline suggested that the Tour de France 2011 had been a bit lacklustre, with the big guns failing to make a decisive move. In Tour terms I must admit that I’m a total “newbie”. (I only tuned in at a late stage of last year’s duel between Contador and the younger of Luxembourg’s cycling Schleck brothers.) But though I’d still have problems picking the legendary Eddy Merckx out in an identity parade, I have to disagree with Richard Williams’ piece. The last three weeks have been a great exhibition of sporting excellence, extraordinary stamina and, at times, sheer recklessness.

I knew the 98th Tour de France was going to be the perfect antidote to a frustrating Wimbledon when I tuned in on the opening day. ITV’s presenter Gary Imlach cheekily pointed out that the channel’s coverage of the 2011 Tour was, in some respects, a continuation of its coverage of the 2010 Tour. That’s because “L’Affaire Contador” — last year’s winner failed a dope test — has yet to be resolved. His home federation exonerated him (quelle surprise!), but the Spaniard still awaits the outcome of an appeal to the Court of Arbitration for Sport (CAS). So he entered the 2011 Tour under a big cloud, and was roundly booed by spectators during the opening ceremony.

You could call it karma — or just the vicissitudes of a punishing event — that Alberto’s first Tour for the Saxo Bank team (previously home of the Schlecks) seemed doomed from the outset. He fell behind his main rivals on Stage One, after getting caught behind a big pile-up on the road. Thereafter he was always playing catch-up, battling a sore knee and trying to shake off fatigue from winning the Giro d’Italia in May.

But Contador’s problems were pretty minor compared with the disasters that befell some of the 198 riders in this year’s race. Sky’s team leader Bradley Wiggins had to abandon, after breaking his collarbone on Stage Seven. The clumsily bandaged face of Holland’s Laurens Ten Dam was the result of a headlong dive into a ditch on Stage 15. Miraculously no bones were broken and he later commented: “You don’t quit the Tour because of a thick lip.”

Even my four-year-old nephew (who does a mean Novak Djokovic impersonation) has seen the graphic footage of the 2011 Tour’s most notorious incident. An act of vehicular madness by a French TV car almost took out Juan Antonio Flecha (Team Sky) and Dutchman Johnny Hoogerland on Stage Nine. As the driver swerved to avoid a tree, Flecha crashed to the tarmac and Hoogerland found himself wrapped around a barbed wire fence – his shorts in tatters.

Graphic photos of Hoogerland’s lacerated hind quarters dominated the sports pages for the next few days. His tear-stained face on the podium after the race also spoke volumes about his narrow escape. Both riders got back up and finished the stage. It’s that kind of stoicism that makes this event special. I’ll remember those guys next time I see a tennis player take a (tactical) injury time-out for a broken finger nail.

British TV doesn’t spend nearly as much time hyperventilating over the exploits of the Manx Missile Mark Cavendish as it does over Andy Murray or Rory McIlroy. You have to be all-rounder to win the Tour de France, so “Cav” won’t ever be a contender for the General Classification unless future itineraries exclude both the Pyrenees and the Alps. But thanks to rule changes this year, his four stage wins have given him a narrow lead over Jose Joaquin Rojas in the Green Jersey competition. For fans on this side of the Channel, the main interest in tomorrow’s final 95km from Créteil to the heart of Paris will be the prospect of another Cavendish dash for the line.

Sooner or later the jockeying for position between Andy Schleck, his older brother Frank and Cadel Evans had to produce some real fireworks. The surprise for them – and French cycling aficionados – was that the heroic efforts of Thomas Voeckler kept everyone at bay for so long. He held onto the yellow jersey for ten glorious days.

Most remarkable was that “Tommy” (as the commentators insisted on calling him) remained in front even after Andy Schleck’s “no guts no glory” Stage 18 victory on the Col du Galibier. Schleck gambled all, with a well-planned breakaway 60km before the end of the stage. But Evans and Voeckler minimised their losses with their dogged pursuit during the Tour’s highest ever stage finish.

Hitting the heights in the Alps may not have given the Schlecks the decisive margin they needed going into the time trial, but they did silence some of their critics. Olympic Gold medallist Chris Boardman had accused Andy “of throwing his dolly out of the pram” for complaining about the steep final descent on Stage 17 to Pinerolo.

That was a curious choice of words. After watching the world’s best cyclists battling the course, the elements and some unhinged spectators for 20 days, I wouldn’t begrudge any of them the odd moan – about anything.

After Evans’ storming performance in the time trial secured him a decisive 94-seconds advantage, he shed a few tears. As runner-up for the third consecutive year (Frank is in third place), Andy offered this thought: “We knew Evans would prove to be a true competitor and a tough guy to beat.”

(Article first published as Blood, Sweat and Tears: the Climax of the Tour de France on Blogcritics.)