If Little White Lies had been shorter, I could have forgiven its many flaws and remembered it like one of those so-so holidays where it rains a lot and you get bitten by mosquitoes.

Guillaume Canet’s Little White Lies starts with a big bang and ends with a whole lot of whimpering. The third feature from the director of Tell No One promised to be undemanding fun, accompanied by that veneer of French sophistication you don’t find in Jennifer Aniston movies. A bunch of affluent, self-obsessed Parisians on a beach holiday also sounds like material that’s just ripe for a Hollywood makeover. But it turns out that Canet’s film is a remake – a homage if you prefer – to that Baby Boomer classic, The Big Chill. The bad news is that Little White Lies runs to an extravagant 154 minutes. As the lachrymose finale dragged on and on, I’m afraid I almost lost the will to live.

The bravura opening gives no hint of the cinematic car crash that follows. The hedonistic Ludo (Jean Dujardin) smashes up his motorbike after another night of partying in a Paris nightclub. His friends, including ex-girlfriend Marie (Marion Cotillard) assemble at the hospital to weep and gaze upon their horribly disfigured friend. But mostly they seem concerned about their complicated love lives, and how Ludo’s ill-timed accident will impact on their forthcoming seaside vacation.

Meanwhile, restaurateur Max (François Cluzet) is alarmed to discover that his close friend Vincent (Benoît Magimel) has fallen in love with him. Both are married, and chiropractor Vincent is already on pretty intimate terms with the uptight Max – in a strictly professional capacity of course. This heartfelt confession lays the groundwork for much of the tension that mars the ensuing two-week holiday.

Along with Oscar-winner Cotillard, Cluzet (Tell No One) is probably the most recognisable actor in this strong ensemble cast. In both face and stature he resembles a Gallic version of Dustin Hoffman, and his perpetually stressed out Max definitely feels like a character Hoffman could have played with ease. From the moment the seven adults (plus kids) arrive at their destination, host Max is raging about everything from the unmanicured lawns, to those infernal weasels that keep him awake. When he finally takes an axe to his bathroom, it feels as though we’ve strayed into the Overlook Hotel, and you wonder why his long-suffering wife Véro (Valérie Bonneton) isn’t beating a hasty retreat. 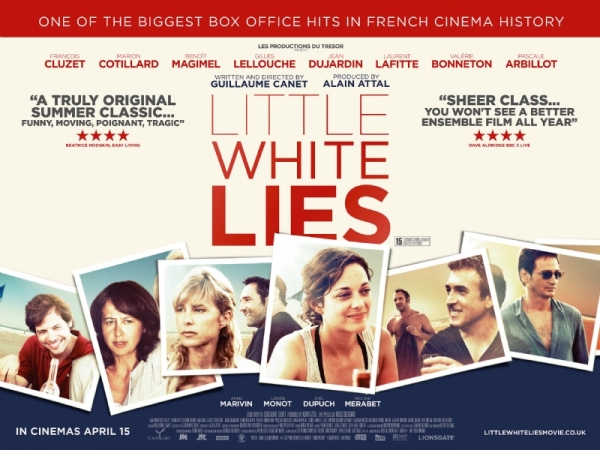 I enjoyed Cluzet’s energetic performance and Magimel handles his role as the deeply confused Vincent with great sensitivity. While Canet’s script cleverly pokes fun at Max’s materialism and Véro’s enthusiasm for organic food, it’s also peppered with the kind of crude sex references you’d expect from an American Pie movie. There’s a lazy reliance here on pratfalls, and an intrusive soundtrack of mainly American songs that often drowns out insight or character development. So when Eric (Gilles Lelouche) goes to the airport to pick up his girlfriend, not a word of their ensuing row is made audible.

If the contributions from Gladys Knight, the Isley Brothers and Creedence Clearwater Revival are anything to go by, Canet believes that a retro soundtrack is one way to conjure up that Big Chill ethos. (Another is to show the gang sitting around watching home movies from a previous holiday.) But here the selections seem clumsy — “My Way” is played during a funeral scene – and they undermine the “Frenchness” of the piece. I’m not saying we have to hear Edith Piaf, but Janis Joplin just doesn’t seem quite right.

There are some genuinely affecting moments, like Marie’s obvious discomfort when her musician lover Franck (Maxim Nucci) turns up uninvited. The men bond with him over a guitar, as the resentful Marie stays in the background. We’ve seen earlier that Marie doesn’t do sleepovers or messy break-ups. It’s well played by Cotillard and the handsome Nucci , and a frustrating hint at how much better this movie could have been if it had been edited to a manageable length.

The Big Chill was brilliantly structured, allowing the characters to confront their shared past and the importance of their recently deceased friend Alex (the unseen Kevin Costner). But whereas Kasdan’s film begins with a wryly humorous funeral scene scored to the Rolling Stones “You Can’t Always Get What You Want”, Canet’s movie simply disintegrates into a tearful mess. After a lengthy romantic subplot back in Paris it feels as though events should be drawing to a close. But it’s left to the group’s elder statesman Jean-Louis (Joël Dupuch) to deliver some home truths about Max’s treatment of Vincent and the shameful neglect of Ludo, before tragedy strikes.

If Little White Lies had been shorter, I could have forgiven its many flaws and remembered it like one of those so-so holidays where it rains a lot and you get bitten by mosquitoes. But after a bum-numbing two and a half hours, I have serious reservations about Canet’s judgment both as a writer and a director. To reference an earlier Cotillard movie, this is a very, very long engagement.

( Little White Lies is released in UK cinemas on 15 April.)