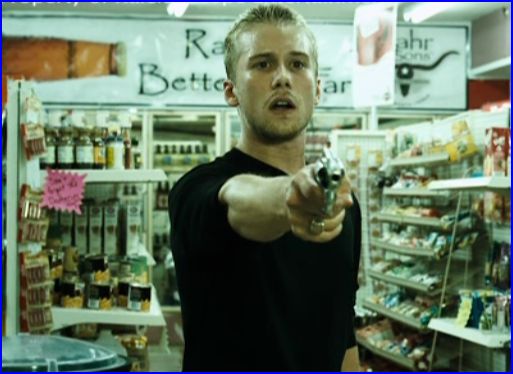 Watching 80 minutes of this movie will certainly be less traumatic than working in a convenience store or joining a fraternity.

Why do college fraternities give themselves those fancy Greek names? In Animal House John Belushi’s Bluto was part of the confederacy of toga-wearing dunces known as Delta Tau Chi. In Will Canon’s feature debut, Brotherhood, the trail of stolen toilet seats and botched robberies leads straight to the door of Sigma Zeta Chi. If you ask me, that big sign outside the frat house should just read “MORON IDIOT CRETIN” – it would save everyone a lot of time.

Canon’s movie isn’t a comedy: it’s a brisk, tense and entertaining thriller, which begins with a bunch of pledges carrying out a series of convenience store robberies. It’s all part of one of those lame hazing rituals – you know the ones that often seem to involve paddles, nudity and sexual humiliation. The twist here is that no one is supposed to get robbed, because there’s a guy standing outside handing out bags of cash – exactly $19.10 — to the pledges.

This being “frat world”, of course, it all goes horribly wrong. (They’d probably prefer the term “tits up”.) When the swag man fails to intercept pledge Kevin (Lou Taylor Pucci), he attempts to do the stick-up and ends up with a bullet in his shoulder. (Aspiring pranksters should note that yelling “We’re not really robbing you” doesn’t help in these situations.) Then pledge Adam (Mean Creek’s Trevor Morgan) realises that he knows Mike, the hapless clerk behind the counter, who’s been shooting at them.

This opening sequence is an exemplary lesson in how to set up a movie: everyone looks sweaty and says fuck a lot, while the frantic action is scored with driving rock music. The revelations about the fake robberies and the prior relationship between Adam and Mike offer strong hints as to the direction of the plot.

Back at the “house”, partying and routine pranks rapidly give way to a battle of wills between Frank (Jon Foster) the fraternity’s leader and Adam, the voice of reason. Let’s give the film-makers credit here for realistically portraying Kevin’s injury as messy, bloody and potentially life-threatening. It’s not quite up to the nerve-shredding standards of Tim Roth in Reservoir Dogs, but Kevin’s ordeal is a good deal less sanitised than in many Hollywood movies.

While he writhes in agony, the argument rages over whether to take him to a hospital. But Frank’s sole concern, of course, is protecting this pack of racist, sexist, dimwits from the long arm of the law. So the list of crimes grows to include kidnapping, attempted blackmail and assault – with a sprinkling of choice racial epithets.

Of course there are numerous precedents for a set-up in which a group of men blunder from one mistake into ever deeper water. From botched heist movies, to black comedies like Peter Berg’s Very Bad Things (1998) and the blockbuster comedy The Hangover, there’s always mileage in the all-encompassing genre of Schadenfreude, or perhaps I should call it FUBAR.

I like the fact Brotherhood plays it relatively straight and doesn’t try to be too clever or knowing with the material or the characters. There are moments of sheer absurdity, as when the enraged members of a neighbouring sorority set fire to the lawn in retaliation for the theft of their underwear and toilet seats. There’s even a dark streak of humour in the plight of poor Mike, whose complicity is key to getting these assholes of the hook. Without giving too much away, there is also a nasty sting in the tale to one of the pranks we saw earlier in the evening.

The performances are uniformly strong, with Foster’s swaggering alpha male act competing with Morgan’s misguided but somehow likeable newbie for control of this rapidly deteriorating situation. The shaky camerawork reflects the air of total panic, without becoming too distracting.

Best of all, the script by Canon and Douglas Simon is well paced and doesn’t resort to plot developments that are either totally unbelievable or excessively violent. There’s a pleasing circularity to a storyline that begins with a string of fake robberies and culminates with a couple of guys trying to hand back money to an utterly bemused convenience store clerk.

The 80 minutes you spend watching Brotherhood may not be the most rewarding of your life, but the experience will certainly be less traumatic than working in a convenience store or joining a fraternity.