It’s a Shame about Ray 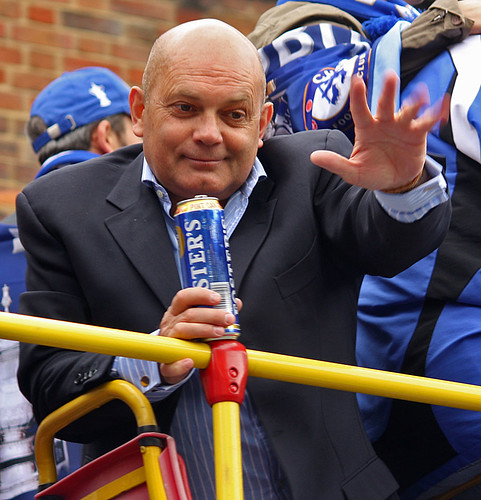 Was it a case of “Et tu, Carlo”, as the Chelsea management stuck the knife into their assistant coach?

I thought Alex Epstein’s dismissal from The Apprentice would be the only boardroom exit that captured my attention last week. I was wrong. On Thursday afternoon, news broke that another genial but slightly rotund man with strong connections to Manchester had been given his marching orders. Chelsea FC had decided to part company with their assistant coach, Ray Wilkins.

No one with even a passing interest in Premier League football should be surprised by the speed with which key staff can be jettisoned. Chelsea fans who have suffered multiple concussions over the years from the club’s managerial revolving door really should have known what to expect. The “Special One” (Jose Mourinho), the dreadlocked one (Ruud Gullit), the “Tinkerman” (Claudio Ranieri) and the gloriously bonkers Glenn Hoddle all raised fans’ hopes before departing in a blaze of negative publicity.

But Wilkins wasn’t Chelsea’s manager, he was Carlo Ancelotti’s consigliere, the guy who helped smooth the Italian’s transition to English football when he arrived from AC Milan in May 2009. For me, though, he will always be Butch Wilkins — Chelsea’s midfield general from the mid-70s onwards and their captain at the tender age of 18.

With his chin dimple, soulful brown eyes and chestnut locks, Butch was a teen heart-throb who occupied the space on my bedroom wall previously annexed by the likes of David Cassidy and Donny Osmond. As it turned out, Butch’s hair didn’t survive the march of time nearly as well as David’s or Donny’s. Mind you, neither of those guys has an MBE or has ever captained Manchester United and England.

Some unkind people have claimed that my one-time soccer Adonis now looks like a podgier version of Christopher Lloyd’s Uncle Fester in the Addams Family movies. Even it that’s true, it’s still a big improvement on a recent (and rather crude) description of Wayne Rooney: “Potato for a face, a turnip in his skull and a vermilion carrot in his trousers”.

Even in his heyday at Chelsea, Manchester United and England, Butch had his detractors. People were always complaining about his preference for passing the ball sideways rather than up the field, a practice that earned him nicknames like “square-ball Wilkins” and “the Crab”. Something tells me that if those epithets were applied to Rooney at the moment, it wouldn’t be in reference to his on-field activities.

While Butch wasn’t a prolific goalscorer in the mode of his modern counterpart “not-so-fat” Frank Lampard, who scored 27 goals last season, he did net 30 times in his 179 appearances for the Blues. The one I remember best though, was his spectacular left-footed solo effort for Manchester United in the 1983 FA Cup Final against Brighton.

Ironically, for a man noted for his equable temperament, Wilkins has the unwanted distinction of being the first England player to be sent off during a World Cup tournament match. In 1986 he saw red after chucking the ball at the referee during England’s match against Morocco. If only he’d used his hands to propel the ball into the net, as Diego “Hand of God” Maradona later did in Argentina’s quarter-final win over England, Butch would have been a hero. It’s a cruel game.

Conspiracy theories were circulating last week about the possible role of Carlo “the Terminator” Ancelotti in Wilkins’s shock departure from Stamford Bridge. One article made this bizarre claim:”In true Stalinist style, all reference to Wilkins has been purged from the Chelsea website as if the former England midfielder never existed.” Er, not quite. How about the article entitled “Wilkins: his Chelsea Years”, which was posted there on Thursday?

What is not in dispute is that Carlo and Butch had been watching a reserve team match against Bayern Munich last Thursday, when Wilkins was informed that his contract would not be renewed. The Italian had been fulsome in his praise of his “noble in spirit” assistant in his bombastically titled autobiography, The Beautiful Games of an Ordinary Genius. (I think something got lost in translation there.) But was it a case of “Et tu, Carlo” as the Chelsea management stuck the knife into their assistant coach, or did he want to hang on to his bald sidekick?

Ancelotti was choosing his words carefully in a press conference yesterday, during which he was quizzed about his recently departed assistant. It’s been suggested that he did play a role in saving Wilkins’s job earlier this year, but that proved to be only a temporary stay of execution. Let’s face it, when owner Roman Abramovich is paying you in excess of £5 million a season, you’d be an idiot to start questioning his decisions in public. So whatever Carlo really thinks, he’ll be keeping his lip buttoned if he knows what’s good for him. Wilkins, of course, was earning a considerably more modest £350,000 a year.

This might sound odd coming from a fan of Ray Wilkins, but I’m cheered by the fact that his sacking attracted as much outrage as it did. It would have been sad if the end of his long association with Chelsea had passed unnoticed because some Premier League footballer’s latest sexual indiscretions were plastered all over the tabloids. There’s no room for sentiment in football and, for once, I think Chelsea might have been right to look to the future.

Judging by their toothless performance in Sunday’s 3-0 home defeat by Sunderland, Chelsea have no reason to feel complacent about their current position on top of the league. A few more humiliations like that one, and we’ll be seeing Carlo and Butch reunited once more — on a park bench.