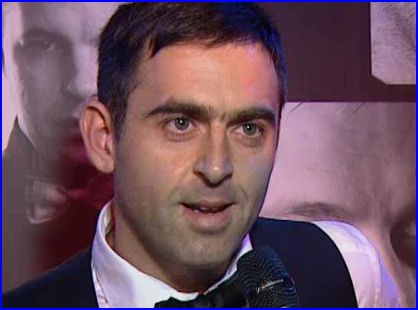 Money's too tight to mention

It’s tough being a top sportsman. Just ask former World Snooker Champion, Ronnie O’Sullivan, who wowed spectators at the World Open on Monday with yet another consummate exhibition of skill — a maximum 147 break. With just eight points on the board, it was a case of “Show me the money”, as Ronnie enquired whether he would be a line for a big payout. But the prize turned out to be a paltry £4,000, rather than the five- or even six-figure sum he’d been hoping for. So, after racking up 140 points, Ronnie decided he didn’t need another “maximum” on his CV and walked away. Thankfully, for the sake of the spectators and sporting posterity, he was persuaded to return to the table to sink that final black. What a hero.

Of course, it didn’t end there. The Rocket then gave an interview to a hyperventilating BBC reporter, who seemed overcome at the “fantastic display” he’d just witnessed. Ronnie shrugged and confessed that he wasn’t going to bother potting that final black: “What’s the point of making a 147 if they’re only going to give you four grand for it.” He didn’t seem that concerned about thrilling the audience either. When you’re a sporting genius who can just knock off breaks of 147 at the drop of a hat, worrying about being a crowd-pleaser is just a little bit vulgar, isn’t it?

The reaction to snooker’s latest mini-controversy has been a mixture of disapproval, disbelief and just a hint of envy. Ronnie, the monobrowed idiot savant of the green baize, is a hero figure to male sports journalists who have a sneaking admiration for his bad boy image and disregard for authority. His ambidextrous antics round the table leave commentators searching their (admittedly limited) vocabulary for superlatives. He’s a golden god — the Roger Federer or John McEnroe of the snooker world. We mere mortals can only sit back, admire, and pray that he never retires.

But as some misguided fools were praising Ronnie for his disarming frankness and “transparency”, I found myself shouting “This is NOT a sport and he is not a sportsman!” I’m prepared to turn a blind eye to greed, stupidity and arrogance in many fields of athletic endeavour, but not when the activity in question is little more than a parlour game played by pasty-faced couch potatoes in ill-fitting suits. I’m not disputing that it takes skill, basic numeracy and many hours of practice to knock balls in with the insouciance that Ronnie displays. Big deal. That doesn’t make it a sport that merits hours of TV coverage and acres of column inches on the back pages of our newspapers.

For me the real world of sport is out there on pitches and courts, in pools and athletic stadia, where physical courage, supreme fitness, teamwork and tactical know-how are all on display. Snooker’s popularity isn’t declining because of the lack of “characters”, it just isn’t a proper game. Yes, the rewards in sport do seem excessive to the average spectator, who’s still fulminating about bankers’ bonuses and money-grubbing MPs. But when Usain Bolt shatters world records and wins gold medals, or Tiger Woods does the golf Grand Slam, it is just a little more awe-inspiring than eight minutes of potting action on a snooker table.

For all the hot air he spouts, I suspect that Ronnie is as unimpressed as I am by his sport and his status as its resident genius. That’s one reason why he keeps threatening to quit after unexpected losses, as at this year’s World Championship. Then again, where else could he earn so much money and enjoy such unprecedented levels of sycophancy for doing so little?

Of course, Ronnie is not the only sporting figure whose public pronouncements make me want to put a brick through my TV. With the world of cricket convulsed by spot-fixing allegations against his team, the chairman of the Pakistan Cricket Board, Ijaz Butt, was on hand to deliver more ill-considered and incendiary remarks. In the noble tradition of investigative reporting established by The News of the World, The Sun newspaper weighed in with further allegations about Pakistan’s one-day match against England at the Oval last week. So, in a gesture worthy of the playground, “Butt-head” retaliated by saying “There is loud and clear talk in the bookies circle that some English players were paid enormous amounts of money to lose the match.” Cue much indignation in the press and hints of legal action for defamation by England captain Andrew Strauss.

Pakistan, already dogged by security issues at home and a growing humanitarian crisis, can ill-afford this latest investigation into its sporting probity. On one level, the question of whether players colluded with bookies to throw away wickets or deliver an excessive number of no-balls, seems utterly trivial. At best, it’s an infuriating distraction, coming at the end of an overlong season that has been padded with irrelevant one-day matches. At worst, this war of words started by a grubby newspaper that exists only to tempt the gullible, will drive Pakistan into the sporting wilderness for years to come.

Ronnie O’Sullivan, Ijaz Butt and others famed for their immoderate language, should take a leaf out of Rafael Nadal’s book. “The Muscles from Manacor” obviously didn’t read all those earnest, well-researched articles explaining how his game didn’t suit conditions at the US Open. Roger Federer and Andy Murray were the favourites, right?

Nadal doesn’t go in for boasting, pandering to journalists, or indulging in idle speculation about his prospects of being the greatest tennis player of all time. He prefers to let his racket do the talking. His four-set win over Novak Djokovic — arguably his greatest achievement to date — was achieved with a now-familiar combination of strength, fortitude and grace in victory. His prize was a whopping $1,700,000. Given Rafa’s incalculable contribution to making the world of sport seem just a bit more honourable, I really think he deserves it.

(Article first published as Peevish and Butt-head on Blogcritics.)