JK Simmons cuts to the chase 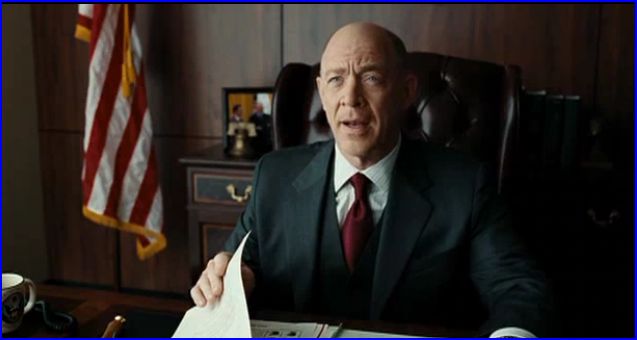 “Don’t you see, the complexity is what makes it all so brilliant!” For those who found Inception simply annoying and convoluted, those jokers at CollegeHumor.com have recently produced the instructional video “Inception Characters Don’t Understand Inception”. In it, an increasingly exasperated actress who looks nothing like Ellen Page attempts to get her head round the movie’s labyrinthine plot and interlocking dream sequences. (My advice: don’t bother.)

I found this skit very entertaining — unlike Christopher Nolan’s movie — and it has a great pay-off. But I can’t help thinking that the Coen brothers had a much better solution for explaining what had been going on, when they cast JK Simmons in the equally convoluted Burn After Reading.

In the Coens’ film, Simmons (as the blandly named “CIA Superior”) and his sidekick Palmer (played by David Rasche), perform the function of a Greek chorus. In other words, their scenes attempt to make sense of the bizarre plot of this screwball comedy, while simultaneously highlighting the absurdity of it all. As the great Roger Ebert puts it: “The boss [Simmons] doesn’t have much dialogue, but every line is a punch line.”

It’s hard to watch the end of Burn After Reading without wondering how many other movies would be improved by the addition of Simmons exclaiming “Jesus, what a clusterf***”. In just a few minutes of screen time, Jonathan Kimble Simmons demonstrates why he is Hollywood’s number one “cut to the chase” guy. He’s the dude with the permanently furrowed brow who sits behind a desk, under the flag, or in the boardroom railing at the utter stupidity around him.

For some people the ultimate (male) movie star would have Johnny Depp’s cheekbones, Brad Pitt’s torso, George Clooney’s honeyed tones and — of course — a great head of hair. He’d have Angelina waiting at home, along with a clutch of gorgeous, photogenic kids and a brace of Oscars. His salary would be at least $20 million per picture, but he probably wouldn’t be a Scientologist.

To my knowledge, JK Simmons does not currently fulfil any of these criteria, though his piercing blue eyes, wolfish grin and dry wit came close to upstaging Messrs Pitt and Clooney in Burn After Reading. Despite clocking up almost 100 TV and film credits since the mid-80s, the 55-year-old actor may yet have escaped your attention unless you happen to be a fan of shows like Oz, Law & Order and The Closer.

You need a strong stomach just to get through the opening credits sequence of HBO’s unflinchingly violent prison drama, Oz. I’ve only watched one series, but a single episode would be more that enough to get the measure of Simmons’s repellent white supremacist, serial rapist and general bad-ass, Vernon Schillinger. His sadistic exploits make Tony Soprano and his crew look like a bunch of choirboys, but the actor’s comedic gifts are also in evidence as he berates fellow inmates for mispronouncing his name.

Simmons currently stars as Kyra Sedgwick’s frequently exasperated boss, Asst Chief Will Pope, in the LA-set cop drama, The Closer. As in Burn After Reading, Simmons is, nominally, playing the man in charge. But anyone who’s watched Sedgwick’s Brenda Leigh Johnson playing fast and loose with protocol will know that his role is to look perplexed, stern and admiring, while attempting to rein in her unorthodox investigative methods.

I’ve enjoyed Simmons’ small but telling contributions to three recent films with writer/director Jason Reitman — Up in the Air, Juno and Thank You for Smoking. Perhaps none of these movies was quite as funny or subversive as critics would have you believe, but Reitman already has four Oscar nominations to his credit, so who cares that he isn’t (yet) the new Preston Sturges or Billy Wilder.

In Thank You for Smoking Simmons is in typically foul-mouthed form as “BR”, the belligerent boss of hotshot tobacco lobbyist Nick Naylor (Aaron Eckhart). Berating the employees of Big Tobacco for their failure to deal with a do-gooder environmentalist, he barks: “We don’t sell Tic Tacs for Chrissake, we sell cigarettes . . . and they’re cool and available and addictive. The job is almost done for us!” I find myself wondering if Simmons should become — or at least play — a politician, because he’s really effective when defending the indefensible.

Most movie fans, though, will recognise JK Simmons as J Jonah Jameson from the Spider-Man movies. He plays Peter Parker’s boss at The Daily Bugle, an archetypal old-style newsman with a big cigar welded to his lip, a ruthless negotiating style and a rapid-fire delivery that leaves journalists floundering in his wake. He does look a lot like Steve Ditko’s drawings, which helps, but it is Simmons’ ability to nail those one-liners that makes him so memorable. Luckily I’m not the only fan, as this compilation of his best moments from the three movies demonstrates.

JK Simmons is never going rival Clooney, Pitt or Depp in the matinée idol stakes, but there’s something about the aggressive way he attacks dialogue and his sheer physical presence that reminds me of another fast-talking figure from the Golden Age of Hollywood: James Cagney.

(Article first published as J.K. Simmons Cuts to the Chase on Blogcritics.)

Burn after Reading, Inception, Jason Reitman, JK Simmons, Oz, The Closer, Up in the Air