You Can't Count on Me

Article first published as Politics: You Can’t Count on Me on Blogcritics. 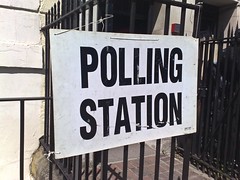 In the week that Britain went to the polls to elect a new government, this was the damning verdict on our antiquated methods of recording votes.  It was delivered by David Monks, from the Society of Local Authority Chief Executives, a man clearly well versed in mixing his metaphors. His organisation rejoices in the acronym Solace, but I doubt his words will bring much comfort to those who were prevented from voting in the UK General Election on May 6th. Yes, it turns out that administering ballots has joined the very long list of things that our once-great nation no longer does well.

Remember the controversy over the “hanging chads”? Back in November 2000, the British media had a field day gloating over the disputed Bush/Gore election and the subsequent disclosures about electoral fraud and faulty hole-punching machines in Florida.

I thought about those chads this week, when I went to cast my vote in the most eagerly anticipated General Election for years. As I grasped the pencil stub and contemplated the list of boxes into which I could place my “X”, all the talk about a hi-tech election seemed as distant as, well, Miami-Dade. We may be getting our soundbites via Twitter these days, but when it comes to conducting a ballot, we Brits still prefer the trusty equipment that has served generations of schoolchildren.

I was lucky enough to cast my vote in a virtually empty school hall at 10.30 in the morning. But as the polls closed at 10pm and pundits geared up for an all-night “talkathon”, it soon became clear that there was one issue on which everyone could agree. The deadline had passed leaving hundreds of voters out in the cold and unable to exercise their democratic rights. What a farce.

Indignation mounted as reports emerged about polling stations running out of ballot papers and disenfranchised voters trying to stage sit-in protests. From Manchester and Leeds in the North, to Hackney and Ealing in London, the British public’s appetite for queuing patiently – and to no avail – was being severely tested.

Our system is seriously flawed because it requires citizens to vote near their place of residence not their place of work. When polling falls on a week day, as it always does, it means that many will go to the polls in the evening, causing a bottleneck at polling stations. But in all the pre-election talk about floating (undecided) voters, no-one expected Britons to cast aside their usual apathy this time. So, with no provision made for a higher voter turnout (it rose from 61% in 2005 to 65% this time) the stage was set for disruption and disappointment.

Just getting through the doors wasn’t the only issue on Thursday night. There’s the antediluvian practice of poring over the electoral register to check off the voter’s name before handing over the ballot papers. It might be acceptable for a bingo game in a village hall, but this is democracy in the 21st century!

Last week, many students – first-time voters – complained about being shunted into separate (slower) lines than other residents, because they hadn’t brought their polling cards with them. One student from South Yorkshire emailed The Guardian website to say: “I was one of the around 100 or so denied the right to vote last night in Nick Clegg’s [Sheffield Hallam] constituency. I was appalled by the archaic set up, for a 24/7 society and an, allegedly, leading world power we run our democracy like a parish fete.”

All of this might seem rather trivial compared with the carnage that marred Iraq’s parliamentary elections earlier this year. Despite the discovery of a car bomb in Londonderry, Northern Ireland, this was not an occasion marred by armed conflict and mass intimidation of voters.

But watching amateur footage of “Voter fury in Hackney, east London” I’m struck by how polite it all is. In fact, it reminds me a bit of the satirical films made by brothers John and Roy Boulting in the 1950s and 60s. In I’m All Right Jack, the peerless Peter Sellers plays a militant trade unionist and he went on to star as a well-meaning vicar who falls foul of his wealthy parishioners in Heaven’s Above.

Satire, now that’s something Britain still excels at. Farces, like last week’s ballot-box shambles, are something we could definitely improve upon.