The Favourite: royalty through the keyhole 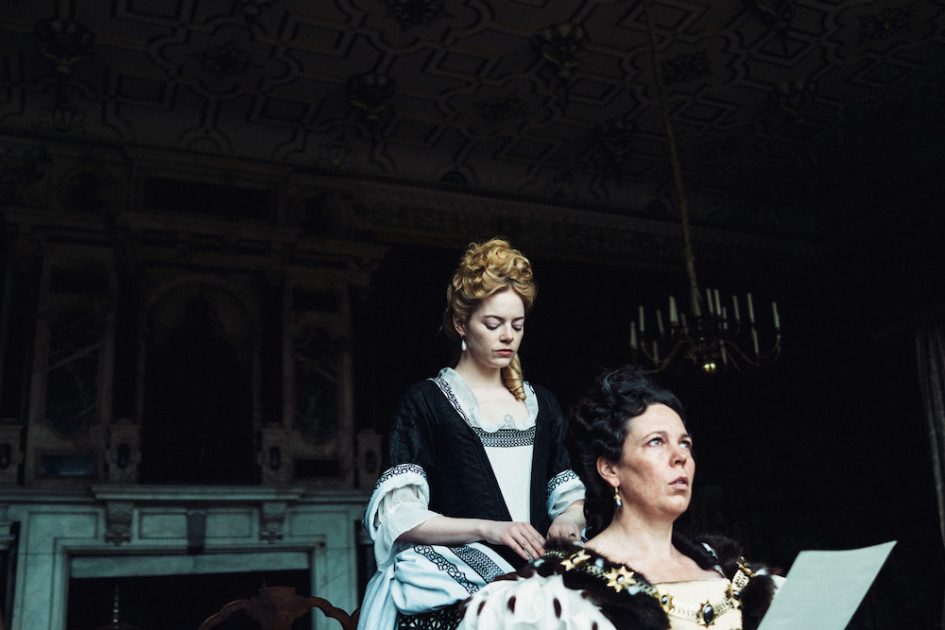 Director Yorgos Lanthimos’s bawdy, expletive-ridden historical romp, The Favourite, often feels as though it is veering off into Carry On film territory. Centring on the love triangle between Queen Anne (Olivia Colman), Sarah Churchill, Duchess of Marlborough (Rachel Weisz), and ambitious maid Abigail (Emma Stone), this is the type of costume drama that comes laced with mud, vomit and innuendo.

In the early 1700s the gout-ridden and widowed Queen Anne reigns over a nation embroiled in the War of the Spanish Succession. She’s wholly reliant on her confidante, political adviser and long-time lover, the Duchess of Marlborough, to manage the political and military crises. Sarah is also adept at handling the monarch’s cosmetic issues, ensuring that Anne isn’t seen in public made-up like a ‘badger’.

That relationship is shaken by the arrival at court of Abigail, Sarah’s cousin, who has fallen on hard times and now seeks work as a maid. Abigail uses her expertise with medicinal herbs to gain access to the royal bedchamber. At first Sarah deals harshly with the interloper, but when she promotes Abigail she unwittingly opens the door to a dangerous rival.

Abigail realises that the way to Anne’s heart is through being attentive to her collection of 17 pet bunnies (one for each of her deceased children). In two shakes of a rabbit’s tail, the maid graduates from applying poultices to the queen’s legs to attending to her more intimate needs. Sarah, who is preoccupied trying to raise funds for her husband’s military campaign in France, is comprehensively outmanoeuvred by her younger rival.

Olivia Colman, who previously appeared in Lanthimos’s The Lobster (2015), is equally adept at comedy and drama. Her Anne may lack dignity at times, as she’s wheeled around the palace barking at staff, but she is both vulnerable and relatable. Writers Deborah Davis and Tony McNamara don’t give Colman many lengthy speeches, but Anne’s physical pain and emotional anguish are all too real.

The most affecting scene in The Favourite is when Queen Anne and Abigail bond over the rabbits and the memory of all those lost children. But generally this film seems happier dealing in broad comedy than in the complex and shifting relationships between the three female leads.

Emma Stone’s shrewd and ruthless Abigail is literally kicked from pillar to post as she claws her way up the social ladder. On her arrival at the palace she’s booted out of the carriage into the mud and arrives at court trailing flies in her wake. (The mud contained liberal helpings of shit.) There’s a running gag that involves her being physically assaulted almost every scene, culminating in the bizarre sight of Abigail beating herself around the head with a book. (All part of her cunning plan to supplant Sarah as Queen Anne’s ‘favourite’.) 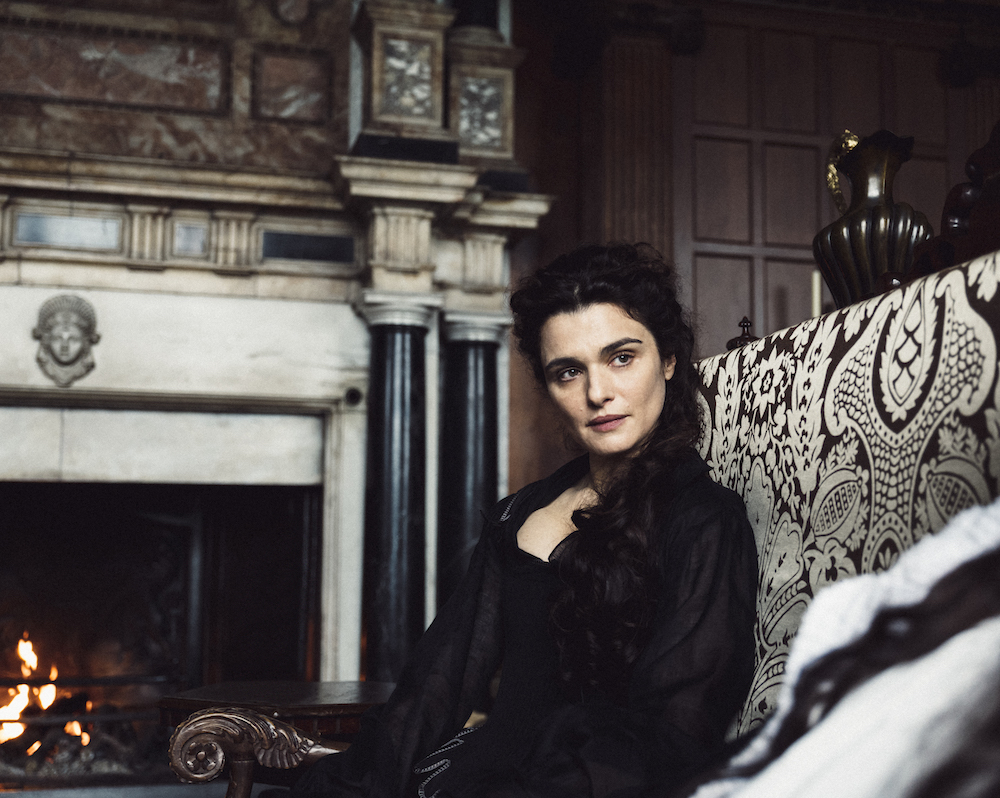 On top of this, we see Anne and Sarah (aka ‘Mrs Morley and ‘Mrs Freeman’) enjoying a mud bath, a naked man being pelted with oranges, and the most ‘off-hand’ post-nuptial sex scene you’re ever likely to see. The supporting cast of male characters, including a hilarious Nicholas Hoult as politician Robert Harley, are memorable mainly for their scene-stealing wigs.

It all makes for an entertaining opening 90 minutes, if you like breezy historical romps, but actresses of the calibre of Olivia Colman, Rachel Weisz and Emma Stone really deserve a screenplay with more substance. Weisz’s Sarah feels particularly underwritten and spends the film being largely reactive to Abigail’s schemes. When her downfall comes, Lanthimos focuses mainly on the comic potential of this aristocrat lying half-dead in a brothel rather than on her pain and humiliation. 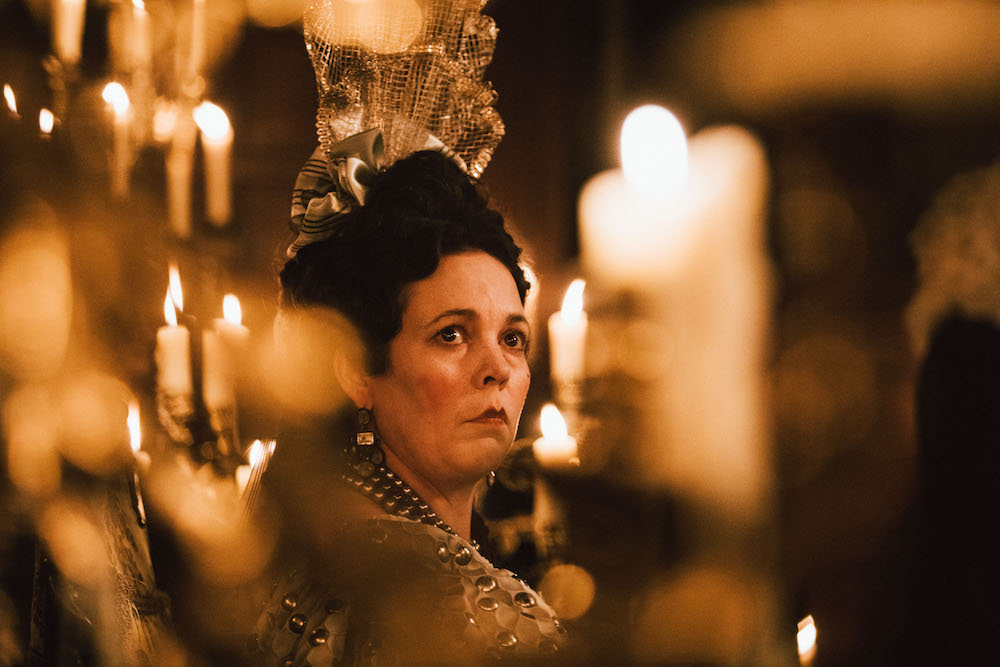 With much of the location shooting done at Hatfield House, The Favourite is replete with magnificent furniture, fan vault ceilings, wood panelling and wall hangings that dwarf the actors. Using only natural lighting, Lanthimos and cinematographer Robbie Ryan seem to be aiming for a Barry Lyndon look, rather than a glitzy Hollywood take on the early 18th century.

I was less impressed with the overuse of a distorting fish-eye lens, that makes you feel as though you’re watching the film through the keyhole, like some voyeuristic butler. It’s even more distracting in the exterior scenes.

Olivia Colman will remain a national treasure, regardless of whether she wins an Oscar for The Favourite. (The 2019 Oscar nominations will be announced tomorrow, 22 January.) But when it comes to exploring female empowerment and same-sex relationships in the early 18th century, this costume drama misses the target.