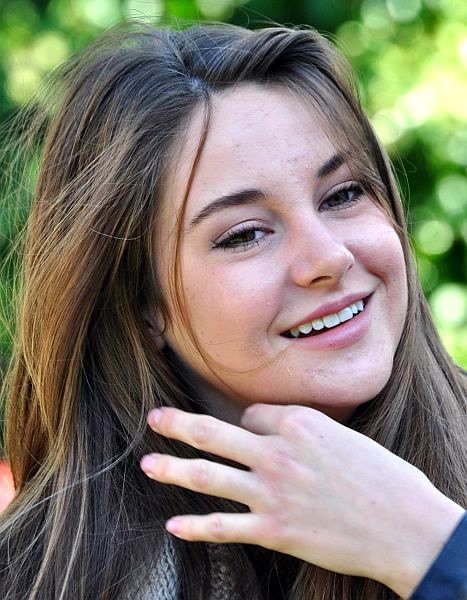 I have a confession to make. I’m not very excited about the forthcoming release of The Amazing Spider-Man 2, directed by the not-so-amazing Marc Webb. It’s the follow-up to 2012’s The Amazing Spider-Man, which I also gave a wide berth. I know that leaves a big question mark hanging over my movie geek credentials, but I don’t care. At least I don’t spend my time hanging round message boards posting mean comments about young actresses like Shailene Woodley, who have the temerity to look like real women instead of fantasy figures.

I have Twitter to thank for alerting me to the furore surrounding the publication yesterday of some on-set pictures of Shailene Woodley, who’s been cast as Mary Jane Watson in the new Spidey flick. No sooner had the website Cinema Blend unveiled some shots of Woodley and her co-star Andrew Garfield, than the trolls took a dump over them – figuratively speaking. Woodley has had her hair dyed auburn to play M-J, but that wasn’t enough to satisfy the fanboys. “Looks horrible as a redhead,” was one of the kinder comments in a no-holds-barred discussion that reached its nadir with this exchange:

“Burn it with fire” (Posted by anonymous troll “balls”)

No doubt “Dee” and “balls” would justify their ignorant, vituperative nonsense as nothing more than friendly banter. But since Taliban victim Aesha Mohammadzai has also been in the news this week, jokes about facial disfigurement don’t really cut it with me any more.

We’re all so inured to anonymous strangers using message boards to denigrate women that no one thinks censorship or intervention is necessary.

Today Cinema Blend has posted a follow-up piece, declaring that those who criticised Woodley’s looks “don’t deserve the movie”. Apparently this wasn’t the only site where fans of the Spider-Man franchise vented their spleen about Woodley’s inadequacies or as Cinema Blend puts it, her “natural looks”. Underneath a semi-glamorous shot of the actress, Editor-in-Chief Katey Rich takes the trolls, misogynists and fanboys to task for failing to distinguish between comic-book fantasy and reality. She tries to redress the balance, by arguing that Woodley’s success in the role should be judged on the basis of her acting – not her looks. Sadly, the notion that an actress in a big-budget comic-book franchise wouldn’t be rated solely in terms of her appearance is pure fantasy.

Cinema Blend’s distaste for some of its readers would be more convincing if they’d taken down the offensive exchange, or moderated the comments, or offered some kind of riposte at the bottom of the original piece. But we’re all so inured to anonymous strangers using message boards to denigrate women that no one thinks censorship or intervention is necessary.

There are certain cinema franchises where the casting decisions attract more than the usual level of scrutiny, but is that any excuse for just being abusive? When Daniel Craig was first chosen to play James Bond in Casino Royale he wasn’t everyone’s idea of 007 heaven. I remember people complaining that he was too blonde, too rugged or just too ugly to play Ian Fleming’s super-smooth spy. Some of those doubters changed their minds after they clapped eyes on a dripping-wet Daniel emerging from the ocean in his tiny blue swimming trunks. Yes, male actors are also relentlessly objectified.

It’s lucky that Cinema Blend didn’t use the same (free) picture of Woodley that I’ve got at the top of this post. The star of The Descendants and The Secret Life of the American Teenager is a mature and intelligent performer, but she does not have perfect skin. I shudder to think what the die-hard comic-book lovers would have said about a Mary-Jane with spots instead of a D-cup.