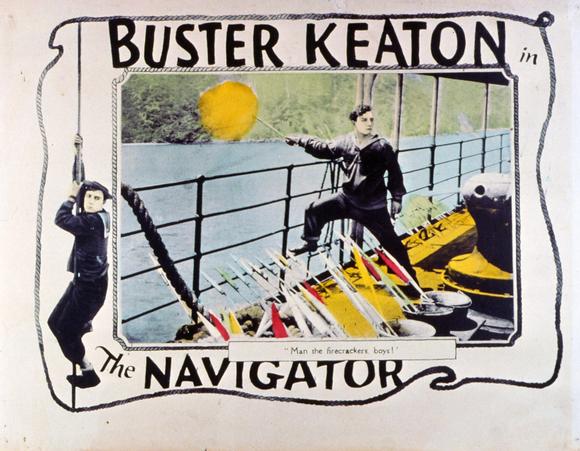 The Barbican continues its mission to make Sunday a day of silence, with a showing of Buster Keaton’s 1924 comedy, The Navigator. This film was Keaton’s biggest box-office success, but I suspect most of us in the audience weren’t that interested in the statistics. Jack Black’s Gulliver’s Travels might be packing them in at your local multiplex, but will he be garnering new fans 87 years from now?

The Navigator stars Keaton as Rollo Treadway, a rich layabout who takes it into his empty head to get married to Betsy (Kathryn McGuire). Sadly, proposing marriage is just the first of many things Rollo proves to be not so good at. Chastened, he decides to embark on a cruise to Honolulu without her.

The film is a mostly a two-hander, as several mishaps and an act of skulduggery leave Rollo and his intended adrift in the steam ship The Navigator. Singularly ill-equipped to deal with anything more challenging that summoning his butler, Rollo must learn to feed, clothe and protect his woman. Together they face the slings, arrows and spears of outrageous fortune – not to mention a tribe of bemused cannibals.

In The Navigator herself – an old liner acquired specially for the film – you can definitely say that Keaton’s enormous talent has once again found the perfect setting. The star and his co-director Donald Crisp exploit every square inch of this vessel in the course of 69 minutes of maritime mayhem. Those wide open spaces and yards of decking keep the unwitting cabin-mates apart during a frantic chase round their floating prison, before Rollo tumbles – quite literally – into Betsy’s lap.

The lengthy galley sequence that follows is one of my favourite parts of the film. Forget MasterChef: this is like watching a couple of sticky-fingered kids let loose in their mother’s kitchen. Starbucks may have its detractors, but even the most inept barista wouldn’t brew coffee with half a dozen beans and a bucket of sea water. Who though, has not felt like taking a knife, a chopper or even a drill to one of those infuriating cans that just won’t open, as Keaton’s clueless Rollo does here? It’s a mark of his consummate skill that he manages to appear nimble even while performing the clumsiest actions.

No review can really do justice to the wit and invention of this comedy. On first viewing, the images that have stayed with me include Rollo’s tireless attempts to park the wringing-wet Betsy on a sun lounger that keeps collapsing under both of them. Then there’s Rollo’s “now you see it, now you don’t” encounter with the ghostly face of a seaman that pops up outside his porthole. Most memorable is the sight of a row of cabin doors flying open behind the terrified Keaton.

Perhaps the film’s most celebrated sequence is the diving escapade, in which Rollo gamely suits up in one of those old-fashioned outfits that makes him look like an astronaut. You have to admire Keaton’s dedication to his craft here. They’d originally planned to shoot these scenes in a pool, but ended up having to brave the freezing conditions at Lake Tahoe. After surviving a swordfish attack and then being cut adrift, our hero rescues Betsy from the natives by turning himself into a makeshift raft.

It’s just one of many moments of ingenuity in The Navigator – on the part of Keaton and his alter ego. If any message may be gleaned from this tale of the idle rich, it is that necessity is the mother of invention. So, after a few weeks at sea, we see the galley is now equipped with Heath Robinson contraptions for lighting the stove and making the coffee.

At the screening I attended, the Barbican showed a restored print of the film, boasting new intertitles and a score performed live by Stephen Horne. At times his piano accompaniment switched to just one hand, to accommodate some flourishes from the flute and accordion. He even sang a couple of lines from “Asleep in the Deep” to imitate the mysteriously self-starting phonograph.

If you’ve never experienced the Barbican’s glorious combination of live music and silence, I recommend that you try it soon.