My, my, my. Such a lot of guns around town and so few brains.

He’s not very tall, looks a bit of mess, sweats profusely and attracts a tongue-lashing from almost every woman he meets. In The Big Sleep, Humphrey Bogart’s Philip Marlowe certainly isn’t a detective in the gun-toting, all-action Clint Eastwood mode. But if you’re in the market for a dogged sleuth, with a quip for every occasion and an eye for the ladies — he’s your man. Co-star Lauren Bacall certainly liked what she saw. She married Bogart soon after filming was completed, setting the seal on one of the great romances of Hollywood’s Golden Age.

The Big Sleep is widely regarded as a film noir, but I prefer to think of it as a stylish, witty and atmospheric slice of 40s crime drama. Unlike two of my favourite noirs from that decade, Double Indemnity and Out of the Past, it doesn’t feature voice-over, flashbacks or a doomed romance in which the hero is ensnared by a rapacious femme fatale. I’m not a genre obsessive — it doesn’t really matter to me how you classify a movie as long as it’s good. Feel free to disagree with me, but I may have to retaliate with a good, old-fashioned pistol-whipping.

Director Howard Hawks has created a mashup of Raymond Chandler’s hard-boiled detective yarn with the tone of his own screwball comedies like Bringing Up Baby and His Girl Friday. This makes The Big Sleep droll, sophisticated and packed with memorable one-liners. The screenplay, co-written by William Faulkner, Leigh Bracket and Jules Furthman, is so entertaining that you’re likely to get distracted and lose track of the story.

The notoriously impenetrable plot of The Big Sleep has passed into movie legend. In her 1978 autobiography By Myself, even Bacall seems to be muddling up two of the minor characters, Owen Taylor and Sean Regan. She refers to the widespread (and unresolved) confusion about who bumped off the chauffeur Taylor, but wrongly suggests it was his disappearance that brought Marlowe onto the case in the first place.

For the record, Marlowe is summoned by the invalid General Sternwood (Charles Waldron), a man who is now obliged to “indulge his vices by proxy”. His offspring are less scrupulous about how they get their kicks, which is why the General is being blackmailed by a book dealer called Arthur Gwynn Geiger — apparently over debts run up by his younger daughter Carmen (Martha Vickers). But that’s merely a starting point for a string of murders, cover-ups, double-crosses and disappearances. Once Marlowe gets sucked into the world of the flirtatious Carmen and her coolly elegant sister Vivian (Bacall) you just know he’s not going to be paid off or fobbed off with lame explanations.

Bogart has one of the most distinctive voices in the history of cinema. His ability to combine menace with mockery and a surprising tenderness is what sets him apart from many of his contemporaries. There are times during this terrifically entertaining yarn, when I could just shut my eyes and listen to him trading volleys of super-smart dialogue with a succession of hoodlums and shady ladies. Every now and then the sound of gunfire would alert me to another premature demise.

“He-llo” he says to sultry bookshop assistant Dorothy Malone, as they prepare to while away a wet afternoon with a spot of “afternoon delight”. Just before this, Bogart offers a deft piece of comic improvisation, when Marlowe poses as an effeminate antiquarian book buyer on the trail of a “Ben-Hur 1860”. Before three minutes of the movie have elapsed, he’s sized up the leggy Carmen and flirted with her a bit before telling Norris the butler “You ought to wean her. She’s old enough.”

The most talked-about scenes in The Big Sleep are the ones involving Bogart and Bacall — arguably one of the most compelling romantic pairings of any era, though they only made four films together. They fell in love during the shooting of Hawks’s To Have and Have Not (1944), but by the time they began their second film in the autumn of 1944, Bogart was trying to patch things up with his third wife. He was drinking heavily during production, but no hangover can disguise the obvious attraction between the pair during their combative and flirtatious scenes. 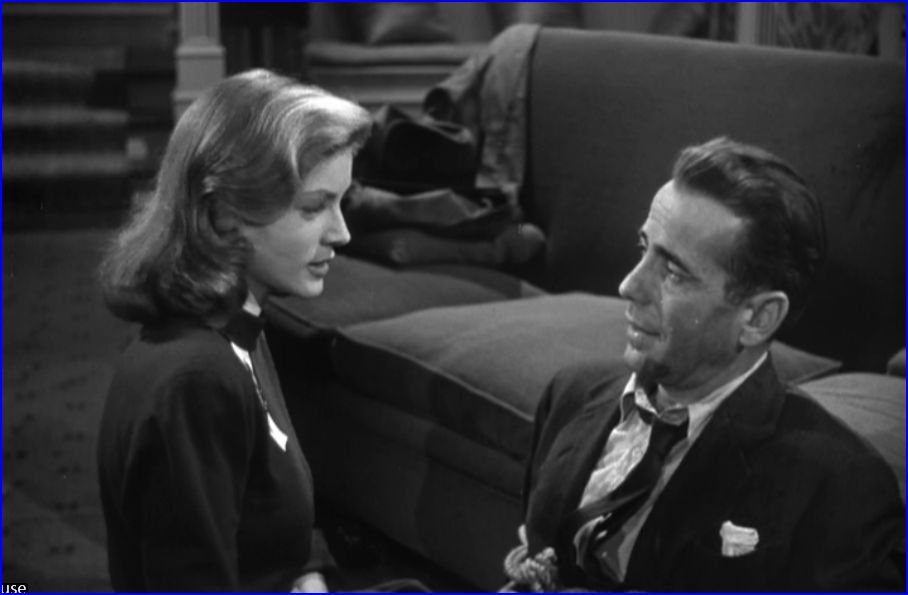 This film was finished and previewed in 1945, but a full release was delayed because of the end of the War and uncertainty over how best to capitalise on the Bogart and Bacall magic. The version eventually released in 1946 omits scenes that would have tied up loose ends in the plot. Instead, audiences saw a spiced-up storyline that favoured innuendo-laden dialogue and foregrounded the Marlowe/Vivian relationship over his other dalliances.

I doubt that any screen couple have executed a prank phone call with more relish than Bogart and Bacall during an extraordinary passage of dialogue with the hapless Sgt Reilly at Police Headquarters. (Earlier, Marlowe has drily introduced himself to Carmen as “Doghouse Reilly”.) But this is just a warm-up for their racy rendezvous in a bar, in which they discuss sex in terms of appraising horse-flesh: “Well, speaking of horses, I like to play them myself. But I like to see them work out a little first, see if they’re front-runners or come from behind.” Cigarettes, plumes of smoke and a tinkling piano in the background contribute to an atmosphere of genuine eroticism. “A lot depends on who’s in the saddle” purrs Vivian to the openly admiring Marlowe, who is still conscientiously pursuing the case — but only just.

The Big Sleep is showing at London’s ICA cinema until 27 December. I can’t think of a better way to start the New Year than in the company of one of cinema’s most enduring brands.