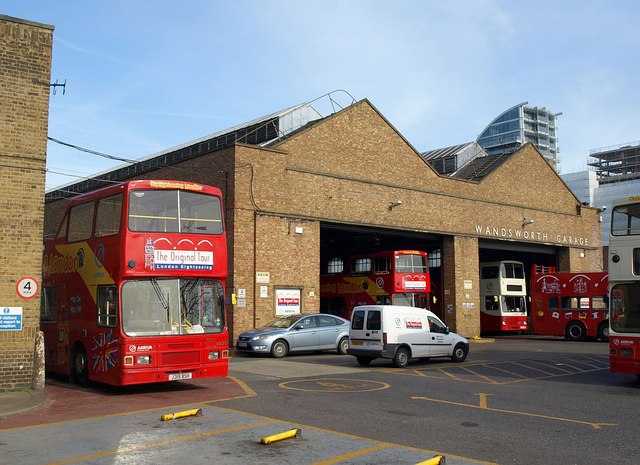 This week on The Apprentice: a pearly king, the artful dodger and Sweeney Todd.

“Think London’s brilliant?” runs the current poster campaign to recruit ambassadors for the 2012 Olympics. After the latest tourism-bashing episode of The Apprentice, I think there is at least one outstanding candidate who should be on Boris Johnson’s wish list.

Following her petulant outburst at the end of last week’s episode, Liz was struggling, once again, to disguise her utter stupidity. (No, putting on more make-up won’t help.) “A bus station? I’ve no idea what we’re doing” she claimed, demonstrating that she also needs to take lessons from Stuart or Jamie in the art of giving a good sound bite. I haven’t had my intellect blunted by working in investment banking, so I figured that a meeting at Wandsworth Bus Garage probably meant it was something to do with buses.

The exercise was a simple one: each team was given an open-top bus for one day and charged with running tours that would “show off this great city of ours”. Shuffling the teams for the zillionth time this series, Lord Sugar gave Stella and Liz an early Christmas present in the person of Stuart. Joanna joined Chris and Jamie in Synergy. In the interests of not giving people what they want, Lord Sugar also parted Karren from her beloved Jamie.

After Stuart’s sterling (I mean Stirling Moss) performance as PM in Week 7, who wouldn’t want to see him take another crack at being the boss? Hey, maybe he could even drive the bus! Londoner Stella, stung by accusations that she’s “too corporate” expressed her passion for all things Cockney and volunteered to be the guide for a walking tour of the East End. Did someone point out that she’d have no chance of stumbling over any truffles or overpriced Knighstbridge restaurants this week?

Stuart “Stella needs to put up or shut up” predicted that the team’s success would stand or fall on her ability to project her fun side. This seemed like a massive error of judgment to me. This task involved setting prices, selling to the public and, above all, O-R-G-A-N-I-S-A-T-I-O-N. Common sense says they should have had Baggs the bullshitter on the bus and Stella pulling the strings.

There were no such problems for Synergy, where thrill-seeker Jamie was already warming up his act for the Ghouls & Ghosts tour. Joanna initially seemed to be having problems enunciating clearly (“Golden Ghosts”?), but this didn’t trouble her for long. No sooner were they in the cab than she was on Jamie’s case, in his ear and generally undermining his confidence about the task ahead. “How do you feel?”, she asked. Ready to throttle her, I suspect.

As Jamie and Joanna attempted to plan the tour route, relations quickly deteriorated, with Nick Hewer looking on. “You’re acting like a mad man!” she cried as poor Jamie finally lost his cool and accused her of being aggressive. Yes, it was the unwelcome return of “gobshite” Jo from Week 2. I like to think this experience was helpful to Jamie when he got in character for the Sweeney Todd element of his tour.

Both teams had the chance to get punters by striking an exclusive deal with the London Visitors Centre, who’d take a cut of their takings. On the basis that the price can never be too high, Stuart and Liz came up with an eye-watering £35 per adult for their Cockney extravaganza. “Do they keep the bus afterwards?” quipped the boss at the Visitors Centre. But the joke really was on Stuart, as he deemed their 35 per cent cut too steep. His counter offer of 25 per cent went down like a lead balloon.

Synergy went for a more modest £25 per head, £10 per child and £50 for families. Banker Chris gave the Visitors Centre a more innovative proposal of 20 per cent of their total revenue. It sent Joanna into a tailspin, when it dawned on her that this really did mean a cut of everything — including their own ticket sales. But it soon became clear that getting punters onto the buses was going to be a challenge, so having the Centre on board would be important.

Feast your mince pies on this

When the action finally got going the following day, it was laughs all the way, though perhaps not for some of the bewildered tourists — “juicy money bags” according to the gleeful Herr Baggs. Tour highlights included the sight of Liz, Stella and Stuart setting out in their shapeless red uniforms, looking like a trio of Butlins Redcoats.

But while Apollo may have had the colourful clobber, there was no doubt who was dispensing the most in the way of local colour. In a phrase that will surely come back to haunt him, Jamie confidently asserted that the River Thames is “the second largest river in London”. (Cue the sound of that London Ambassador application form being shredded and binned.)

But let’s not get too hung up on facts, or whether Big Ben is really “20 diameters in width”, because Jamie understood that personality is what you need to bring these tours alive. He did go completely over the top with his gory descriptions of Sweeney Todd’s throat-slitting and pie-making operations, but we didn’t actually see anyone throwing up or fainting. Clearly Jamie isn’t afraid to make a complete gherkin of himself.

I would have bet my house on Stella’s ability to get her facts right and not lose any of her punters during the course of the day. Sadly, without her Lotus and GPS, she was unable to guide her flock to the jellied eels stand, leaving the trailing Karren Brady looking distinctly unimpressed. Still, they did get to meet Larry the pearly king and feast their eyes on a wall of graffiti. Was it the work of Banksy, or some bored teenager?

But the real action was back in Trafalgar Square, where Stuart was attempting to pull out all the stops to sell tickets on the remaining two tours. By then, he and Liz had already figured out that their prices were too high, so they opted for trying to “neutralise” Joanna’s prospective customers before they reached the pick-up point at Embankment station. Even more cheeky was his attempt to grab tourists outside the Visitors Centre, on the basis that “it’s a free country”. This flagrant touting was quickly shut down, leaving a rueful Stuart to reflect that they needed “a better strategy”.

The highlight of “tout wars” was when Chris and Stuart almost came to blows — “seriously, f**k off” — as things got nasty under Nelson’s Column. Stuart condemned the swearing as being “unprofessional”, but it seemed that his cheeky chappie persona wasn’t actually selling many tickets.

The spectre of defeat

With neither team managing to fill their seats on all three tours, it was looking like a relatively close contest in terms of revenue, though Jamie had obviously won the battle for hearts, minds and (strong) stomachs. Back in the boardroom, he earned unstinting praise from Nick Hewer. Lord Sugar was less enthusiastic about mouthy Joanna’s attempt to renege on the deal with the Visitor Centre.

But while Chris and Stuart tried to play down their schoolboy spat, there was no escaping the figures: a profit of £834.30 for Apollo, as against Synergy’s £1,099.33. A resounding victory, considering that they handed over 20 per cent of their takings to the Visitors Centre. So Synergy took off to Jersey for oyster-collecting and a Michelin-starred meal. Apollo embarked on a bout of soul-searching, with graffiti enthusiast Stella predicting “the writing’s on the wall for Stuart”.

Liz and Stella might have been pointing the finger at Stuart, but Lord Sugar had other ideas. Despite the fact that Stuart had totally screwed up on the pricing, it appeared that the boss wasn’t being quite as scathing as he might have been as he dissected the failure of the task. Further evidence that Stella is one of his big favourites came in the form of the pronouncement “you’re very, very shrewd and very, very clever”. So, no damning with faint praise there. You knew that her ploy of staying out of the business side of things had paid off this week.

Even more worrying for Liz, was the realisation that the Sugarmeister has a big soft spot for Stuart, whose antics seem to arouse a degree of paternal affection and amusement. He sold only £260 worth of tickets to Liz’s £505, yet her superior sales record over the series wasn’t enough to save her.

When your back’s against the wall in the boardroom a great sales pitch can save you, as Stella demonstrated last week. By contrast, a feeble effort (Joy, Laura) or being too strident (Paloma) can turn the tide against you. So it wasn’t a great surprise to see Liz undone by Stuart “the artful dodger” and his “I will make you so proud of me” appeal. Now in full metaphor-scrambling mode, Stuart declared “I’ve got a field of ponies waiting to literally run towards this”, while Stella wore the broadest smile we’ve seen for weeks. How could Liz compete with that?

As we saw last year with Debra Barr, Lord Sugar is more likely to be seduced by chutzpah than a good track record, or plain common sense. Stuart, an overgrown teenager aged 21, probably couldn’t have sold even one Babyglow outfit — let alone 10,000. But he has mastered the art of marketing his own dubious charms and that is what counts.

The crestfallen Liz became the tenth casualty of the boardroom, leading to scenes of utter astonishment back at the house. “Noooo waaaay!” shouted Joanna, echoing the feelings of those who had their money on Liz to win.

Yes, Stuart’s in the final five because he has “that little spark” and, let’s face it, because he’s good for viewing figures. Time will tell whether he’s really a bright spark, or a cut-price brand with a limited life span.