The Shop Around the Corner 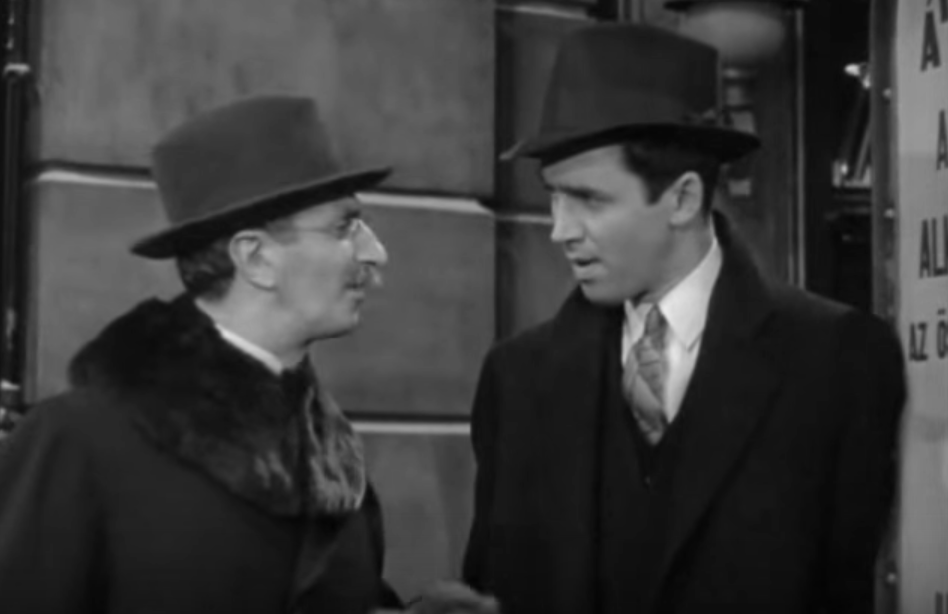 It’s not tinselly and it’s a long way from being “Capra-corn”, but this movie does come with a lifetime Christmas guarantee.

Does the thought of Christmas movies raise a smile or a grimace? For some, the prospect of TV screens awash with tinsel, fake snow and a sprinkling of elves is as unpalatable as that once-a-year date with turkey and Brussels sprouts. For me, nothing says Yuletide like a season of b/w films from Hollywood’s golden era — preferably starring Humphrey Bogart, Cary Grant or James Stewart.

At this time of year, Stewart’s starring role in Frank Capra’s It’s a Wonderful Life (1946) tends to overshadow everything else he did in his illustrious screen career. That’s a shame, because The Shop Around the Corner , the film he made six years earlier with director Ernst Lubitsch, is a gem. There are no angels or cosy family gatherings round the tree, but this story of a very literary love affair between two shop workers does end at Christmas. The BFI is re-releasing it on 10 December, and I recommend the film to those who prefer their Christmas movies schmaltz free.

On the night I went to see The Shop again, the journalist in front of me seemed a bit confused: “So this is a Lubitsch film from the 50s — or the 60s?” Wrong. The German-born Lubitsch died in 1947, after clocking up more than 70 films, including Trouble in Paradise, Ninotchka and Heaven Can Wait. The “Lubitsch Touch” was once a byword for sophisticated comedy, andThe Shop Around the Corner, remains much funnier than the pallid 1998 remake, You’ve Got Mail.

Samson Raphaelson’s screenplay is adapted from Parfumerie, a 1937 play by Nikolaus Laszlo, and the film is set in Budapest in the late 30s. No one actually speaks Hungarian, of course, though in Hollywood’s idealised view of Eastern Europe everyone does seem a little more polite. Almost all the action takes place around the Matuschek and Co leather goods store, where clerk Alfred Kralik (Stewart) has spent nine years as the right-hand man of boss Hugo Matuschek (Frank Morgan).

The opening sequence, in which Kralik and his fellow workers wait outside the store, is a master class in how to establish both the characters and the various plots. We learn that Kralik has a touch of indigestion after the previous night’s seven-course dinner (plus hors d’oeuvre) at the home of Matuschek and his wife. There’s some banter between Kralik and his colleagues, the dandy Vadas (Joseph Schildkraut) and the conscientious Pirovitch (Felix Bressart), including a gag about Mrs Matuschek’s face-lift that feels very topical. Then there’s my favourite character, Pepi the smart-talking errand boy (William Tracy), who probably knows everyone’s secrets.

On the personal front, Kralik has been conducting an epistolary romance with a girl he met through the classified ads. They’ve deliberately eschewed “vulgar” personal details in favour of cultural subjects. Professionally, things are less harmonious, as he clashes with the boss over the merits of a tacky musical cigarette box.

The object of Kralik’s affections turns out to be Klara Novak (Margaret Sullavan), who irritates him by getting herself hired at the store after he’s explained that there are no jobs to be had. The reluctant colleagues never suspect the connection between their high-minded romance and the petty squabbles that punctuate their working day until, finally, a meeting is planned.

Watching this film today, it’s impossible not to think of all the other romantic films you’ve seen that rely on disguises, misunderstandings and out-and-out deceptions. The brilliance of Lubitsch’s film is that the scenario of two people in love who (apparently) can’t bear each other’s company actually seems fresh here rather than hackneyed. Ben Hecht, author of the play The Front Page, was an uncredited writer on this movie, and some of the tart exchanges between Kralik and Klara bring to mind the great screwball comedies of the 40s. I particularly like their spat about her “yellow blouse with light green dots” — or is it a “green blouse with light yellow dots”?

Even when Kralik discovers that his enamorata and his annoying colleague are one and the same person, Lubitsch never allows the story to descend into manipulation or heavy-handed farce. In one of the film’s most celebrated scenes, Kralik waits outside a cafe as Pirovitch reveals that the lady waiting with a copy of Anna Karenina and red carnation is none other than Klara Novak.

The lovers then have an awkward encounter — she’s unaware that he is the guy who has effectively stood her up — laced with a dose of literary one-upmanship. It’s interesting to compare the same scene in You’ve Got Mail, in which Meg Ryan strikes me as both aggressive and overly defensive, while Tom Hanks ladles on the sarcasm. Stewart, by contrast, has a gentleness about him, even when he’s contemplating the “mixture of poetry and meanness” that’s just been tossed in his face by Sullavan’s indignant and rather confused Klara.

Stewart may not be as suave as Cary Grant, but his understated charm and ability to project both integrity and wistfulness make him the perfect lead for a film that treads a fine line between comedy and melancholy. Lubitsch delivers more than just a powder-puff romance: there’s jealousy, suspicion and more than a hint of bitterness as the tormented Matuschek suspects the wrong man of having an affair with his wife. It’s a misunderstanding that almost ends in tragedy, but it also turns out to be the ambitious Pepi’s springboard to promotion.

The spectre of loneliness — especially at Christmas — is summed up by Matuschek’s good-humoured efforts to score himself a dinner date on Christmas Eve. Even more graphic is the earlier sight of the bereft Klara staring into an empty mailbox and wondering whether she’ll ever hear from her lover again. Like the group hug round the Christmas tree in It’s a Wonderful Life, it remains one of those indelible cinematic images from the 40s.

Fittingly, Lubitsch brings down the curtain on Kralik and Klara not with a romantic clinch, but with the hero hitching up his trousers to prove he isn’t bow-legged. It’s not tinselly and it’s a long way from being “Capra-corn”, but this movie does come with a lifetime Christmas guarantee.