This week on The Apprentice: Stella takes one for the team; Karren takes offence; and Raleigh takes off.

The Apprentice is nothing if not even-handed. Week One saw the boys squabbling over their rancid sausages like a pack of ravening dogs. Given half a chance, it was a sure bet that the harpies in stilettos and oversized earrings would turn out to be even worse. One of their number caught a break — courtesy of the boss — and emerged from the latest task trailing clouds of glory.

Welcome to Heathrow Terminal 5, “gateway to hundreds of destinations”. Any hopes that Lord Sugar was sending his apprentices on a well-earned Caribbean break were rapidly dispelled, when he appeared via video link to brief them on their next — home-based — assignment. In a cunning mash-up of last year’s tasks to design a piece of exercise equipment (Week Three) and rebrand Margate (Week Eight), the candidates had to devise an innovative new product for the beach and then pitch it to three retailers.

Alert viewers would have spotted that young Raleigh (apparently pronounced RAWleigh) was absent from the early morning line-up. Lord Sugar explained that he’d left because of a family emergency. We now know that his brother, Captain Ed Addington, was seriously injured by a roadside bomb in Afghanistan last December. It was a sobering reminder about real life away from the posturing and the power suits. Raleigh, with his flair for the dramatic, will be missed.

With the boys a man down and last week’s “heated” boardroom exchanges still ringing in his ears, Lord Sugar decided to transfer 30-year-old Londoner Stella to Synergy. From this point on, Mark Halliley’s voice-over made several references to “Stella and her boys”, as though she was a schoolteacher brought in to sort out a class full of unruly pupils. Actually, that wasn’t too far wide of the mark.

The Apprentice is edited for maximum drama and entertainment value, so you don’t get a balanced picture of how the candidates performed. Every shrug, grimace and ill-considered comment can be taken down and used against them in the court of public opinion. Refreshingly, it would appear that Stella is not a graduate of the Dan Harris school of shooting your mouth off. Yes, that’s right kids, you can be an effective leader without interrupting, sneering and generally behaving like an ass.

Property developer Jamie soon came up with the genius concept of a drinks cooler that could double up as a portable head rest. The Cüüli was born — complete with Alex’s brace of superfluous umlauts — basically it’s a beach towel with a detachable pillow case for storing all your essential items. The punters at Butlins weren’t impressed, but supercilious banker Chris dismissed their views. He later described Stella’s management as “piss poor”, despite the fact that she’d agreed to “take one for the team”, by modelling for their pack shots. Perhaps he would have been happy if she’d agreed to wear a bikini with tassels. 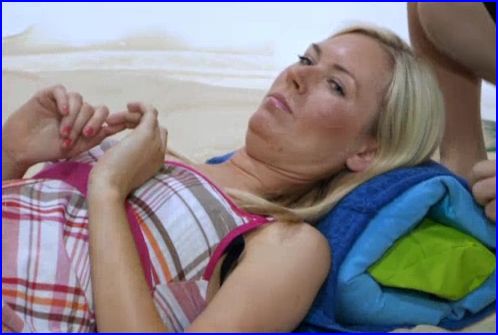 You don’t watch The Apprentice in the hope of seeing genuinely innovative ideas, brilliantly marketed to achieve huge sales. No, the viewers want to see conflict, confusion and “products” that look as though they’ve been assembled by a bunch of Pritt Stick-wielding kindergarten kids on a wet afternoon. In that respect, Laura Moore’s Apollo were the winners — by a mile.

Despite bragging about her intelligence and people skills, the 22-year-old had no ideas and was ill-equipped to deal with “princess” Paloma, “bulldog” Melissa and the rest of her warring team. Joanna’s suggestion for a book stand was met with barely disguised contempt from her colleagues, who clearly didn’t regard reading as a legitimate seaside activity. But as the deadline approached they were forced to go with the “book eeze”, a clumsy-looking device in eight pieces that had failure written all over it.

Joanna may have been “a bit of a gobshite”, but it was Laura’s indecisiveness and bad judgment that cost her team dearly. Boots (coyly referred to as “the chemist”) did express interest in buying the clunky contraption, but only if they could have exclusivity. Laura foolishly turned them down, saying it was “a bit too early” to be having that discussion. Only a wincing Sandeesh seemed to grasp the full magnitude of this error.

In the boardroom, Stella and her boys tried not to gloat over their none-too-impressive sales of 100 Cüülis. Laura’s bunch of no-hopers had the ignominy of being the first Apprentice team to register a big, fat zero. Indecisive to the last, she couldn’t even decide who should join her at the final reckoning — eventually opting for Joanna and Joy.

Now here’s my problem with The Apprentice: Laura was a totally useless manager and Joanna couldn’t stop winding people up, yet Lord Sugar chose to give Joy the boot. Her attempts to rise above the bickering did her no favours in the end, though you could hardly claim that Joy lost this task for the team. Despite having a face that looks like a cross between a Modigliani and a Cubist era Picasso, Joy obviously hadn’t made much of an impression on Lord Sugar or his aides. She departed looking crestfallen.

Karren Brady, who’d endured two days of watching these preening incompetents, delivered a damning verdict on their performance. They were supposed to be representing business women everywhere, but their behaviour was “outrageous”. Stella, you had a lucky escape.

Quote of the week: “This is a bit like having a baby. You know it’s in there, you just don’t know what it’s gonna look like.” (Stella, preparing to unveil the prototype Cüüli.)