They think it's all ova

The vuvuzelas may have sounded the Last Post on England’s dismal World Cup campaign, but let’s not be too downhearted. Fifa President and luddite-in-chief, Sepp Blatter, has now apologised to the FA for that refereeing blunder on Sunday that saw Frank Lampard’s goal disallowed. Goal-line technology will surely be coming soon to a football stadium near you, closely followed (I hope) by Blatter on a platter. 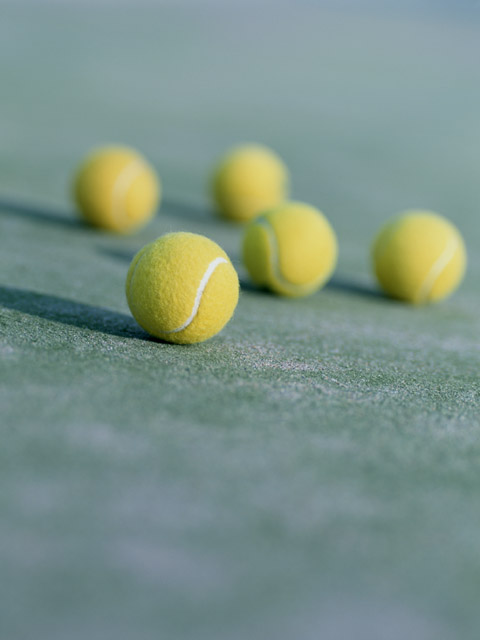 As the British press put the boot into Capello and his men, Wimbledon had the problem of trying follow up what some have dubbed Magic Monday. The 4th round of the Championships had seen Andy Roddick’s sensational exit at the hands of one Yen-Hsun Lu, the man forgetful BBC commentators insisted on calling “the man from Chinese Taipei”. Elsewhere, drama queen Novak Djokovic unwisely indulged in a spot of chest-baring after defeating Lleyton Hewitt, while Kim Clijsters got the better of Justine Henin in “the battle of the Belgians”.

So the line-up for Ladies quarter finals day looked very much like a case of Venus Williams, Serena Williams, super mom Clijsters and a bunch of other people who aren’t exactly household names. Previewing the action, BBC DJ Richard Bacon attempted to stir things a bit with tennis correspondent Jonathan Overend by suggesting the prospect of another Williams vs Williams final was “boring”. The appropriate response to this ill-informed nonsense from a broadcasting non-entity like Bacon would, of course, contain several expletives and the word “up”. I’ll leave it to your imagination.

As it turned out, the results were anything but predictable. I must admit that Venus’s latest opponent, Tsvetana Pironkova, was a new “ova” on me. If pressed, I might have hazarded a guess that she was a statuesque blonde from the Russian Federation, with a decent two-handed backhand, an American accent and the word Bolliettieri stamped somewhere about her person. 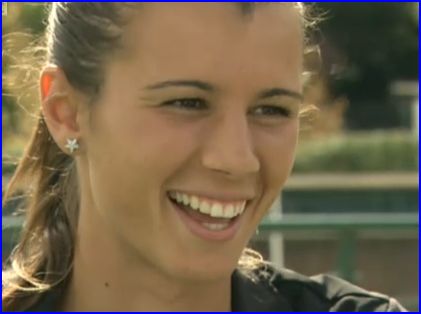 But Pironkova turns out to be a 22-year-old Bulgarian brunette with a previous win over the number 2 seed and a refreshingly positive attitude towards tackling the Williams juggernaut: “I thought I could win. I was really going for it.” Venus was soon hitting the heights on the shriek-o-meter, but her game was misfiring and she committed 29 unforced errors as she crashed to a 6-2, 6-3 defeat — her worst display at Wimbledon.

What happens when the nicest person ever to play tennis (Clijsters) comes up against one of the game’s most lachrymose competitors (Vera Zvonareva)? Followers of Russian tennis categorise Vera as the one who cries a lot, so that we can distinguish her from the one with a dodgy serve (Elena Dementieva), the one who looks almost as hot in a bikini as Kournikova (Maria Sharapova), and the one who looks an awful lot like Marat Safin (Dinara Safina). Is that clear?

Kim was undone by another patchy performance, losing 3-6, 6-4, 6-2 and, perhaps, squandering her best opportunity of reaching a Wimbledon final. Anyone who remembers Clijsters’s error-strewn French Open final against Jennifer Capriati back in 2001 will know that her game can be a very hit and miss affair. So it proved today.

On Thursday, Serena Williams will hope to add to her impressive tally of 73 aces when she takes on — you guessed it — another opponent from Eastern Europe in the shape of unseeded Czech Petra Kvitova. 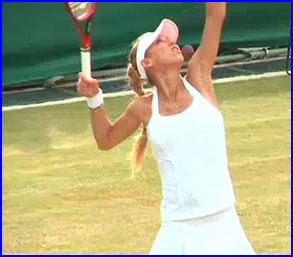 As if that wasn’t more than enough “ovas” for one day, Wimbledon wheeled out some big names from yesteryear in the Ladies Invitation Doubles event. Leading the way in the glamour stakes were Anna Kournikova and Martina Hingis, flashing their million-dollar smiles at the salivating photographers and making their British opponents Sam Smith and Anne Hobbs look rather dowdy and distinctly slow. The best moment of this one-sided encounter came when Kournikova had to call the trainer on court to deal with a nasty blister on her hand. It was more Hollywood than Wimbledon.

But even Kournikova has to take a back seat to the biggest “ova” of them all — Martina Navratilova — who was teaming up for the doubles with another former champion, Jana Novotna. Martina, who recently underwent radiation treatment for breast cancer, will climb Mount Kilimanjaro for charity later this year. But for now, the winner of 9 Wimbledon singles titles is back where she belongs, with her feet firmly planted on the hallowed turf of SW19.

(Article first published as They Think It’s All Ova: Wimbledon 2010, Day 8 on Blogcritics.)